COLUMBUS, OHIO APRIL 3, 1999
*ALL BLACK & WHITE PHOTOS & TEXT OF STONES IN COLUMBUS BY BLUE LENA & MAY NOT BE USED WITHOUT PERMISSION* 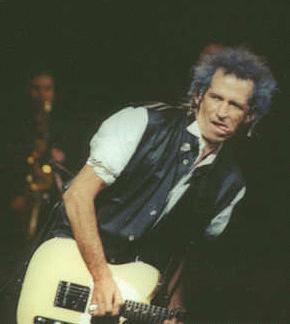 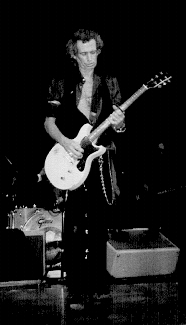 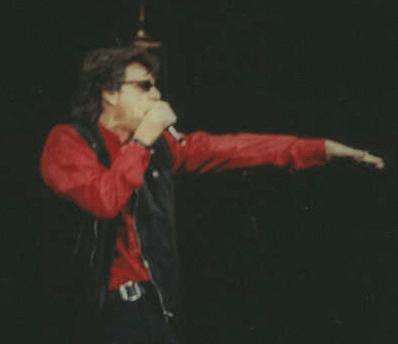 I managed to get a late check out from the Ritz Carlton in Cleveland & hit the road for Columbus at around 1:30pm. I blasted Made In The Shade (the boot) and Acetates on the way in the car, which made the trip go faster. It rained fairly hard part of the way & made it difficult to see, but I made it to the Days Inn University in around 2.5 hours. Not quite the Ritz, LOL. The desk clerk seemed amused that all these Stones fans were checking in & commented that everyone had weird rates, they were all different due to being obtained on the internet. I went to the room, plugged in the boom box, tried to take a nap, but found it difficult knowing what was to happen in a few hours. Around 4pm, Micawber (Curt) called & was just about to check in. 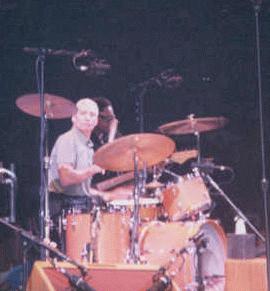 At 6:45 we left for the Schottenstein Center on the Campus of OSU, just a few minutes up the road. It had rained earlier, but now was clearing off & by the looks of the parking lot, a lot of folks had taken advantage of the warm weather & did some serious tailgating. Will Call opened at 7 & we arrived there about 7:05 to pick up our tickets. Curt ended up with an extra ticket, so we decided that once we got inside we'd decide which seats we wanted to use. My ticket was by the B stage Keith's side, row A on the side. 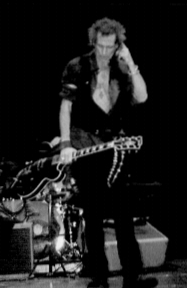 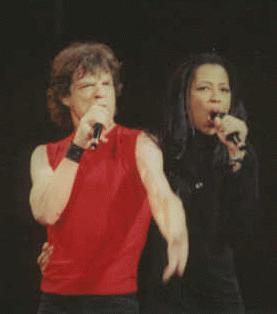 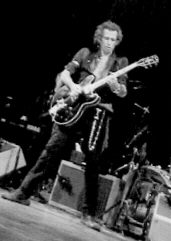 At 9:15 Curt & I grab one last beer & pour it in a cup, use the empty (a delight for women used to waiting in long lines) backstage restroom & venture out onto the floor to check out our seats. We move toward the B stage & run into Norman who we had met in Cleveland. I give him my stub for the A row side of the B stage & Curt gives me his KK seat 3rd row from the B stage. We start the show standing behind the B stage, just as Keith rips the opening riff of JJF, but then the security folks tell us to take our seats & we all move separate ways. I head toward where my other seat was & listen to the next 2 songs, but then I once again think "what the hell" and just walk right up to the front row, Keith's side, & then I see Sandy again, she's just about to snap a photo of Elizabeth Jagger & Leah Wood with their bunny ears. I take my place near the stage as the band rolls into song #4, Respectable. I can't believe that once again I have been so fortunate to have a place to stand right by Keith's corner of the main stage, to be SO close to THE MAN is an indescribable experience that back in 1994 I NEVER imagined I would have. During the Voodoo Lounge tour, I recall looking down through binoculars with envy at the people in the front rows wondering "how the hell do they get down there?". Well, it took 5 years of hard work, but finally I made it, and I can see why when people finally get those seats, why they never wanna go back! 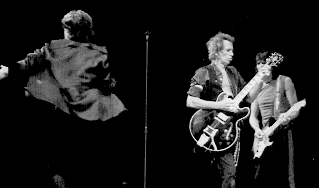 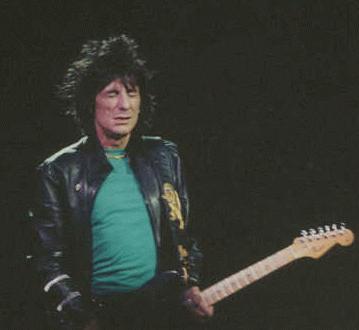 I brought out my disposible camera, seeing as how the security was relatively tame this year (as opposed to 97 in Columbus where after snapping 6 awesome shots of Keith from row 20 on the catwalk, a not so nice security fellow broke my camera!). I was able to get a few good shots of Jagger, one which is posted above. Keith layed into the open G riff of Honky Tonk Women, a riff I can hear 1 million times over & never get tired of it. I danced & danced, figuring this time I was by myself, so if I looked like an idiot (which I am sure I often do when I am lost in Keithian ecstacy), so what??!! Moonlight Mile was mesmorizing, I just clutched my skull scarf & listened intently, somtimes the songs are just SO good that I can't take in the visuals & auditory output all at once...and that's one of those songs. I got ready for Saint, hoping that we could top the Cleveland crowd of the other night, but it was not meant to be. We did pretty well, but I still rate Cleveland #1 on the audience participation of the "yeah oh yeah's". Then came the true story of Some Girls, as was Mick's trademark intro for this song, Mick pounding away furiously on guitar for this track. Mick really played quite a lot this tour, guitar, piano, harp, I was quite happy to see him doing it. I mean, some people think Mick can't really play guitar & he is just all show...but hell, he can play, he was taught by Master Riff Hard himself right? And even Keith says of Mick's harp playing "that's where you find the pure, unadultrated Mick Jagger". Paint It Black kicks ass over the version from 89, although Keith had that beautiful acoustic intro back then, but this electric stomping version really gets the crowd on it's feet with their hands over their heads, clapping wildly to the beat. Time for the intros & Keith has been getting an even bigger ovation than Charlie this tour! Even Ronnie bows several times & hams it up as the crowd goes wild, his emerald green shirt is what I recall of the moment. When Keith comes out he does his fist to head & heart in gratitude & says his usual "good to be back" line. The crowd continues to chant "Keef, Keef, Keef!". Always a pleasure to hear Thief In The Night, my favorite of the B2B Tour, and Keith later remarks "Life is beautiful" truly enjoying his moment, as he rocks into Before They Make Me Run. When Mick get's bounced up from under the stage for Out Of Control, he nearly loses his balance with the force, but recovers nicely, as I make my way back to the B stage to stake out a front spot.

I arrive Keith's corner, right in front of a security guy, who luckily isn't too tall that he's blocking my view & decide to hold this position as OOC ends & the boys make their way to the B stage. I never was along the catwalk this tour for hand slapping, etc., but I had that opportunity a few times on B2B, so I decided that this tour B stage positioning was the most important thing. I snap one photo of Keith as Rt. 66 kicks in & then I see Curt who grabs my arm, pulls me throught the crowd to my left, making me now front & center of the B stage, right beneath Jagger. I hold my camera as steady as the flailing arms at the B stage permit & manage to get the above posted shots. I was truly surprised they turned out so well! I wasn't even sure what shot I was getting, but I got a few lovely Keith shots that captured the mood, so I was happy. We pumped our fists in the air shouting "hey, hey, you, you" & then just watched & listened in awe as Midnight Rambler stole the show...I just kept picturing seeing them do that tune on video in '72, etc & couldn't believe it was being re-created before me here on stage a mere 3 feet away. WOW. 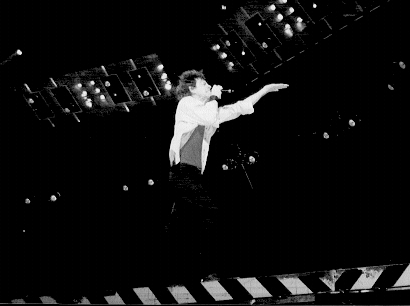 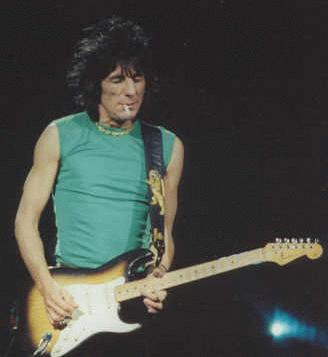 As the set ended, Jagger again grabbed his camera & snapped a few shots of the crowd & we made out way back to Keith's corner of the main stage for the end of the show. I guess security is usually (not always mind you) more lenient with letting females stand close to the stage, as I was never given any trouble. But, the guy kept hassling Curt & telling him he had to leave, thanks Sandy for stepping in & setting security straight. Mick came to our end several times during the ending numbers & pointed, pouted & pranced, even making eye contact a few times. He was obviously enjoying himself & NOT going through the motions as the media always tries to portray. Keef did his false starts on Start Me Up, which has become a new crowd pleaser in itself & Keith loves to do it differently each time too, just to keep Charlie awake.

All too soon we were onto Brown Sugar, Bernard & Lisa coming to the forefront to sing "Sweet Brown Sugar" and then help out on the "yeah yeah yeah woooos". The confetti falls from the ceiling & the boys head backstage as the lights dim. One more song & once again this incredible experience of my 7th No Security show, 18th lifetime show, will again come to an end. The arena tour has been SO great that it's now hard to even put my shows in order of favorites, they all had their own different & wonderful experiences that made them each uniquely special. As Mick finished Sympathy he comes to our side of the stage & blows 2 kisses down to all of us girls (maybe guys too), which gives us a schoolgirl thrill. Arm in arm they link for the final bow, once to the front of the stage, once to the back...and then it is over. Thank You Rolling Stones for another great evening! In just a few weeks I will head to San Jose for what I cannot believe are the last two shows of the U.S. tour already!