You are not logged in. Log in
Entries by Topic
All topics  «
Misc.
Poker
Politics
Religion
Television

Essential Reading
Stability, America's enemy
7 Signs of Non-Competitive States
Inequality and risk
It's the demography, stupid.
Islam can vote, if we let it.


A few months ago Pete Birks mentioned on his site that the US actor Richard Belzer had played the same character on six different TV shows. Can that be topped for typecasting? Perhaps so. Check out Britain's own Michael Sheard:

and try and count the number of times he played Adolf Hitler. I counted five. But if you chuck in Himmler (three times) 'Goering's Double' (on Allo' Allo') and various Kamp Kommendants, U-boat captains, Oberstleutnants and other assorted WW2 Germans, I reckon you can safely say he was even more typecast than Belzer. He was even a German in Auf Wiedersehen Pet.

But he's better known to most of you as Mr Bronson on Grange Hill!


Talking of dictators. I suppose you didn't watch The Trap on BBC2. Rather made a nonsense of all you believe in. 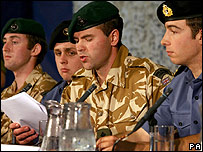 The whole sorry saga has made HM Forces look like amateurs. I am sure US forces performing the same task in the Gulf would have done so heavily armed and in depth.  Any attempt at abduction by the comedy revolution guards would have resulted in lots of dead Iranians.

Instead, we get to see whimpering boys and some bitch who can't wait to try out the latest fashions in Tehran. Later, Iran gets a diplomat back and access to 5 other Iranians captured a few months ago. 3-0 to President I'm a Mad Dinner Jacket.

As soon as bitch and the whimperers get off their business class plane with new suits and gifts from the good people of Iran they are paraded in front of cameras at Heathrow instead of being frog marched off to see Cpt Cat O'Nine Tails.

This is what Tony Blair's gay cabinet has made of the country. Weak. Ineffectual. Gay. Crap armed forces and a BBC pumping out the multi-cult/gay/drugs are good shit 24/7.