This site covers airfields in all 50 states: Click here for the site's main menu.

Please consider a financial contribution to support the continued growth & operation of this site. 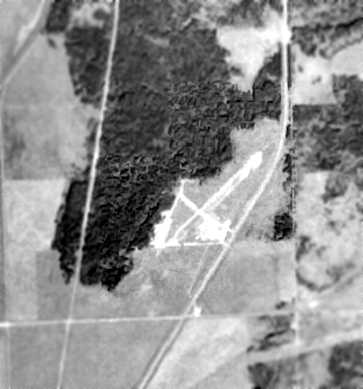 This general aviation airport was not yet depicted at all on a 1966 aerial photo nor or the 1967 USGS topo map,

nor listed in the November 1972 Flight Guide (according to Chris Kennedy).

According to Heather Hart, “Henley Aerodome was founded in 1973 as posted on [Clayton] Henley's grave stone.”

The earliest reference which has been located to the Henley Aerodrome

was its listing in the 1976 AOPA Airport Directory (according to Chris Kennedy).

The earliest depiction which has been located of the Henley Aerodrome was a 9/19/76 aerial photo.

It depicted Henley as having a single northeast/southwest runway. 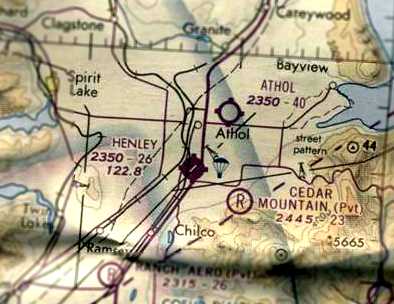 was on the July 1977 Great Falls Sectional Chart (courtesy of Chris Kennedy).

It depicted Henley as a public-use airport with a single 2,600' paved northeast/southwest runway,

and indicated that parachute operations were conducted at the field. 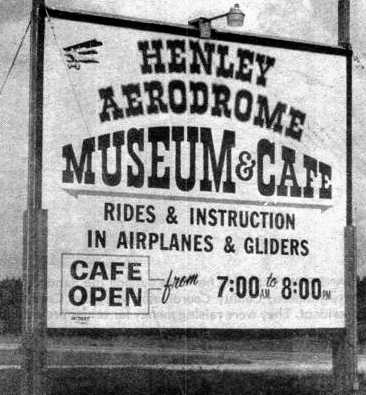 An undated photo of a sign for the Henley Aerodrome Museum & Cafe, 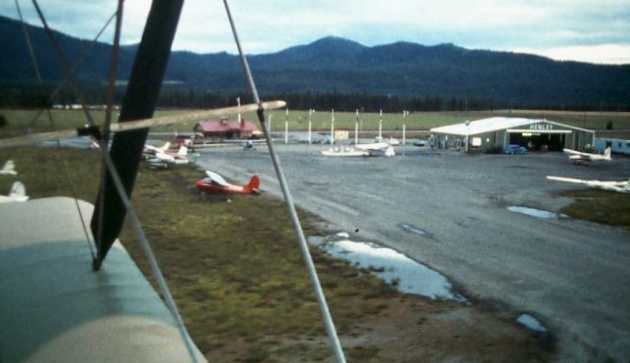 A circa 1970s aerial view of the Henley Aerodrome by Montgomery Stewart.

Montgomery recalled, “Henley took me up one afternoon in the 1970s in a Dehaviland Tiger Moth.” 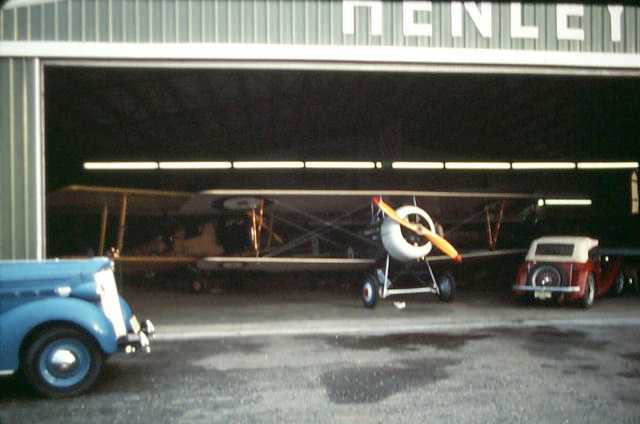 A circa 1970s photo by Montgomery Stewart of several biplanes in a Henley Aerodrome hangar. 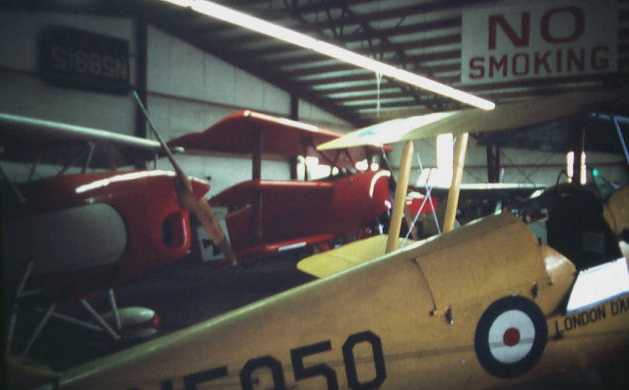 A circa 1970s photo by Montgomery Stewart of several biplanes inside a Henley Aerodrome hangar. 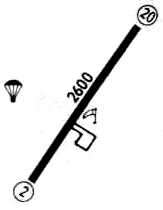 depicted the Henley Aerodrome as having a single 2,600' paved Runway 2/20,

with a small ramp on the southeast side.

The field was depicted as conducting parachute operations.

A 10/4/78 USGS aerial photo depicted Henley as having a single northeast/southwest asphalt runway.

In 1981 the airport was purchased by Gary Norton, founder of Spokane’s ISC Systems Corporation.

Described as “An avid pilot with a passion for vintage aircraft”, Norton sought his own airstrip & a place to store his growing collection of classic planes.

According to Wikipedia, in 1981 “Lengthening & other improvements are done to the airstrip. The hangar is turned into an air museum.”

The May 1981 Flight Guide (according to Chris Kennedy) described Hensley as having a 4,200' runway.

In 1986, after successfully outbidding Disney & others for an original 1915 Steam Engine Train,

Norton began thinking of his property as more than his own personal playground.

He imagined a transportation-inspired museum & theme park where people could see & appreciate all kinds of rare planes, trains, and automobiles.

As the park was being built, Norton changed the name to Silverwood in order to broaden the park’s appeal & pay homage to the region’s mining history. 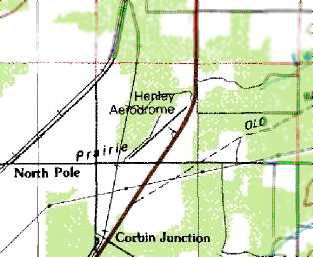 The 1987 USGS topo map depicted the Henley Aerodrome as having a single northeast/southwest runway. 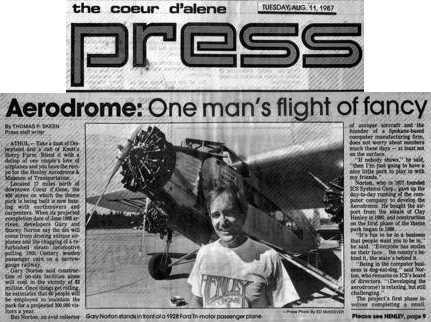 An article entitled “Aerodrome: One man's flight of fancy” appeared in the 8/11/87 Coeur D'Alene Press,

depicting owner Gary Norton in front of his Ford Trimotor. 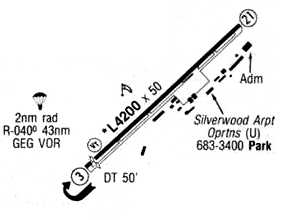 The May 1994 Flight Guide (courtesy of Chris Kennedy)

depicted the Henley Aerodrome as having a single 4,200' paved Runway 3/31.

Additional improvements had been added since 1977, including a parallel taxiway, larger ramp, and multiple buildings.

and to have air shows.

The last photo which has been located depicting the Henley Aerodrome while in operation was a 1998 USGS aerial view looking west.

The airfield had a single asphalt northeast/southwest runway with a parallel taxiway,

and a ramp on the southeast side with several hangars.

Note the large aircraft parked on the southeast side of the midpoint of the runway – Gary Norton's Ford Trimotor?

The Silverwood Theme Park occupied land on the south side of the airport at this point,

but had not yet expanded to cover the airport.

According to Heather Hart, “Mr. Norton purchased the airstrip from him and founded Silverwood after selling his banking software in the 1980's.”

The Henley Aerodrome was evidently closed at some point between 1998-2003.

Unfortunately, this expansion covered the northeast end of the runway. 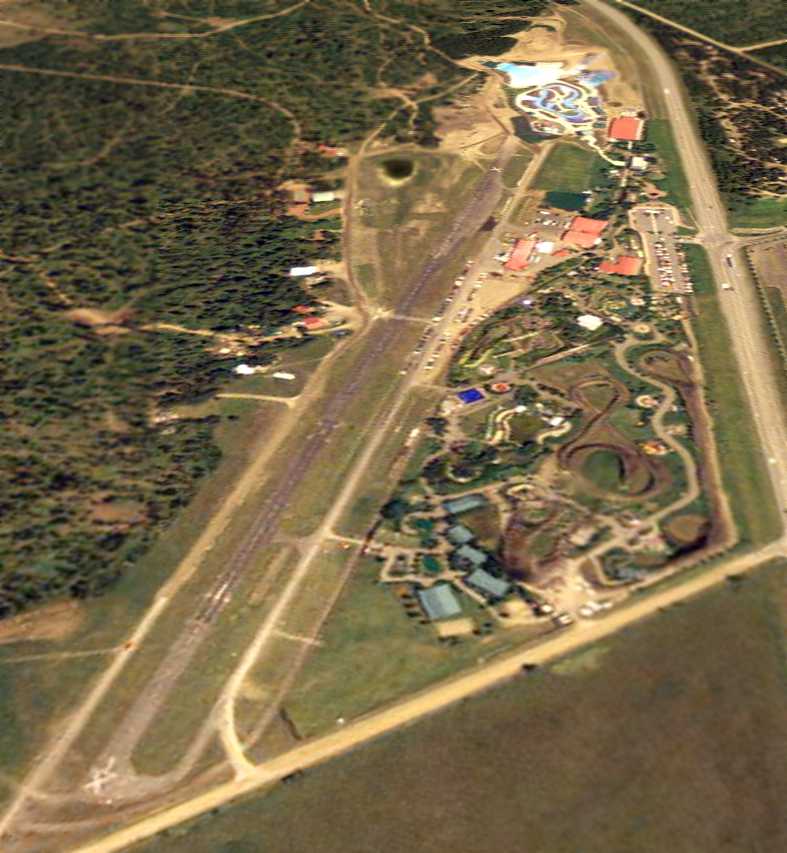 The far end of the runway had been covered by the Boulder Beach theme park.

But the majority of the length of the runway & taxiway remained intact,

and it appeared as if the hangars remained standing as well.

The former Henley Aerodrome is depicted as an abandoned airfield on the 2008 Sectional Chart.

A 2016 aerial view looking west at the site of Henley Aerodrome, showing the majority of the runway remained intact,

though the north end had been covered by the Boulder Beach theme park.

The 3 hangars remained standing as well.

The site of Henley Aerodrome is located northwest of the intersection of Route 95 & East Brunner Road.

Thanks to Al Courtney for pointing out this airfield.

Since this site was first put on the web in 1999, its popularity has grown tremendously.

That has caused it to often exceed bandwidth limitations

set by the company which I pay to host it on the web.

If the total quantity of material on this site is to continue to grow,

it will require ever-increasing funding to pay its expenses.

to help defray the increasing costs of the site

and ensure that it continues to be available & to grow.

Please consider a donation of an equivalent amount, at the least.

This site is not supported by commercial advertising –

it is purely supported by donations.

If you enjoy the site, and would like to make a financial contribution,

you may use a credit card via

To make a one-time donation of an amount of your choice:

Or you can sign up for a $10 monthly subscription to help support the site on an ongoing basis:

This site covers airfields in all 50 states.

For the site's main menu: Home