Scorned by most film critics today as studio hack work, the mummy
films of the 1940's contain numerous subtexts which reveal the fears and anxieties
of a society at war.

“Three thousand years ago, the Princess Ananka died and was buried with all the ceremony due her exalted station.” Thus intoned Eduardo Ciannelli to George Zucco in Universal’s 1940 horror classic The Mummy’s Hand, and thus did viewers first hear the saga of Kharis, an ancient Egyptian prince who paid dearly for defying the implacable gods by trying to reanimate his dead lover. The story undoubtedly sounded familiar. It was simply a revised version of the tragic tale of Imhotep, the prematurely buried Egyptian priest who had been so effectively portrayed by Boris Karloff eight years earlier. But The Mummy’s Hand put a different spin on the older story, and kicked off a fascinating new series of films that hinted at terrors significantly different from the ones that haunted audiences of the Karloff film.
Of all the classic Universal movie monsters, Kharis the mummy receives the least serious attention from film critics. Those who do take the time to write about the four films that Kharis lumbered through usually dismiss them as assembly line hackwork, cranked out by a studio more interested in turning a fast buck than in creating serious horror offerings like its earlier Boris Karloff masterpiece The Mummy (1932.) Yet while the production values employed by the makers of the Kharis series are easy to fault, there lies a core of meaning in these films that remains largely unexplored today. We live in a different world with different concerns, and most of the dark shadows that gathered around The Hill of the Seven Jackals no longer oppress us. But a viewing that pauses to consider the psychic ambience of the period in which these under-analyzed films were made allows us to peer beneath the ragged bandages of the mummy. As with many of the science fiction films of the fifties, in which fear of Communism, the A-bomb and related radiation/mutation phobias are easy to spot, a close examination of the mummy series of the early forties also reveals many contemporary anxieties.
However, like all Egyptian mummies, Kharis must be unwrapped one layer at a time, and the most obvious and general level of significance we discover beneath his bandages should come as no surprise. Ever since Napoleon sent his army of savants into Egypt to document the wonders of an ancient culture, people have been fascinated by the land of the Nile and the civilization that once flourished along its banks. The care and attention lavished by Universal on the Egyptian flashback sequence, first used in Karloff’s film and then recycled, with minor editing, in The Mummy’s Hand and The Mummy’s Curse (1944), testifies to the studio’s awareness of an ongoing public enchantment with ancient Egypt. Showing the elaborate funeral of the Princess Ananka and the subsequent fate of Kharis, who is caught and buried alive for attempting to revive her, this sequence captures the pageantry of an ancient culture and is always remembered fondly by fans of the mummy series.
Writers often point exclusively to the 1923 media hoopla about the death of Lord Carnarvon and the alleged curse of Tutankhamen as the inspiration for the mummy films of the thirties and forties, but these movies actually derive from more diverse origins than this single colorful episode. The idea of a reanimated Egyptian haunting or otherwise seeking vengeance on the desecrators of his final resting-place predates Tut’s discovery by a good many years. Both Sir Arthur Conan Doyle and Bram Stoker penned spooky mummy yarns long before Carter and Carnarvon ever set foot in the Valley of the Kings. Even the mummy’s first cinematic appearance in the film The Mummy of King Ramses (1909) predates the unearthing of Tutankhamen by thirteen years. Like all mummy tales, both literary and cinematic, the Kharis series taps sources that can’t be limited to a single archeological discovery.
To fully explain what those sources are, one almost has to go to Egypt and actually enter some of the more well-preserved tombs of the ancient dead. Something uncanny really does seem to hover in the shadows of such places. This uncomfortable feeling stems largely from the fact that the ancient Egyptians decked out their tombs like dwelling places, stocked with food, furniture, and clothing, and managed to preserve the 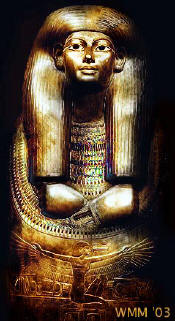