On 2 June 1703 Palmquist sent his next report from The Hague. He had again met with the Grand Pensionary Heinsius. The Swedish had emphasized the importance of putting stop to all Russian recruitment in the Netherlands and to stop anyone from leaving for service in the Czar's navy. Heinsius promised to speak to both the Admiralty in Amsterdam as well as to mayor Nicolaes Witsen.

Palmquist next wrote on 6 June. He had again spoken to Heinsius, who had expressed concern about events in Poland. What if Charles XII after capturing Thorn (under siege) and Elbing would turn his attention to Danzig? It would not please the Dutch or the English, Heinsius said. Well, Palmquist had replied, Thorn was only under attack because Saxon forces were inside. Danzig would only be in danger if the Saxons took control of it, which seemed unlikely. They had also touched on the matter of the Russian recruitment. Heinsius assured Palmquist that he had spoken with both the Admiralty and particularly mith mayor Witsen. He had found that the Czar certainly tried to find good craftsmen, such as turners, carpenters and blacksmiths. Seamen had not been recruited and the Dutch authorities would make sure that none were.


In Börje Magnusson's Svenska teckningar 1600-talet (1980), page 104, it's stated that the artillery officer Paul Bethun while in Russian captivity in 1714 made a drawing of Saint Petersburg. This is incorrect. Bethun served in Elbing and was captured when the town was taken by the Russians in 1710. In an account dated Ystad 13 December 1711 Bethun describes his experience in Russia:

On 3 April 1711 the Swedish prisoners (476 men) were ordered  to march through Marienwerder, Strasburg, Pultusk and Grodno to Riga, where they were kept outside the town for three weeks. On 4 July the prisoners were ordered to march eastwards and eventually ended up at Velikiye Luki. On 25 August the Swedes were ordered to continue and on 12 September they reached Narva, the 15th Jama and on the 16th Koporie. There the prisoners were met by Menshikov and the group was divided. The officers were sent to Ivangorod and the common soldiers to Saint Petersburg where they were put to work. Many of them, Bethun says, died from hunger and fatigue.

On 8 December Bethun left Ivangorod and marched through Dorpat to Riga. There were no wagons for the officers, he writes, and those who were sick had to be drawn on sleds by their comrades. They were also badly treated by the guards. It was obvious, Bethun claims, that the plan was to kill all the prisoners. On 2 December they marched to Dünamünde and on the following day boarded ships which carried them to Ystad.

So did Bethun actually visit Saint Petersburg? He doesn't say, but if he did it was certainly not in 1714.


On 30 May 1703 Johan Palmquist sent a long report to Charles XII and the usual copy to the Chancery in Stockholm. His predecessor Nils Lillieroot had just left the Hague, so Palmquist was on his own.

Palmquist had met with the Grand Pensionary and had again asked about the rumoured Russian recruitment drive. Heinsius had replied that he had discussed the matter with the Admiralty of Amsterdam. As recruitment by foreign powers on Dutch soil usually was prohibited in time of war the Grand Pensionary had believed that such a ban had been issued for Amsterdam. However, this was apparently not the case. The Admiralty was consequently not aware of any such Russian recruitment effort, but deemed it unlikely to succeed as most of those who had returned from service in the Russian navy were very unhappy with their experiences. Some had been enticed by promises of higher rank, but these were few and not very capable. Palmquist had told Heinsius that the Czar's plan was to equip cruisers for service in the North Sea, where they were to disrupt the trade from the Baltic and try to divert merchants ships to Arkhangelsk. Heinsius promised to try and put a stop to any Russian recruitment effort.

Palmquist was not entirely satisfied with this, so he had written to a certain van de Lutt (of the Admiralty of Amsterdam?). Later in the volume there is a copy of the reply, dated Amsterdam 8 June. Van de Lutt writes that as far as he knew the Czar employed about 12 to 15 captains and some lieutenants. He did not know their names. The Czar had since one or two years been building ships of war at Arkhangel, but it was impossible to know the plan. Van de Lutt would attempt to find out and knew a man he believed could help. As for the rest the people in Amsterdam could not understand why the King of Sweden would amuse himself in Poland while Russians ruined Lvonia.


On 16 May 1703 (O.S.) Palmquist sent a a new report to Stockholm. It concerned two different issues. The first was the damages caused to the duchy of Zweibrücken by forces from the Electoral Palatinate.

The second had more bearing on the Great Northern War. Rumours hade reached Sweden that the Czar was attempting to recruit soldiers (or maybe rather naval personnel) in Amsterdam. Palmquist forwarded a copy of the letter he had sent to the Admiralty in Karlskrona. The matter had, Palmquist stated, been brought to the attention of the Grand Pensionary Anthonie Heinsius, who had replied that he knew nothing of this. Heinsius said that he considered it very unlikely, as any form of recruitment by a foreign power was strictly forbidden and consequently would be pointless to attempt. The Grand Pensionary had stated that he would nevertheless look into the matter and would put a stop to the effort if the rumour proved to be true.


On 2 May 1703 (O.S.) Johan Palmquist sent his first report to the Chancery in Stockholm. He acknowledged having received the printed account of the Saladen battle, which he promised to use when appropriate.

Palmquist also reported that a rumour suggested that he had brought a peace proposal from Paris. The rumour had grown quite strong after his arrival in The Hague. Palmquist had made every effort to explain that it was quite untrue and had received assistance from Anthonie Heinsius, the Grand Pensionary of Holland. Their effort appeared to have been successful, Palmquist wrote. As for the rest he referred to Lillieroot's dispatches.

In a hastily added PS Palmquist writes that accordingb to report which had arrived the same morning the fort near Bonn had been captured in an assault. This should refer to Fort Bourgogne, which was taken on 9 May (N. S.) by allied forces under the command of Menno van Coehoorn, the famous Dutch engineer.


On 27 March 1703 Johan Palmquist, previously Swedish envoy in Paris, arrived in the Hague where he was to relieve the very able and experienced Nils Lillieroot, who had been recalled to Stockholm to help fill the vacancies caused by the deaths of Bengt Oxenstierna and Samuel Åkerhielm.

On the 28th Palmquist wrote to Charles XII. He had the preceeding day arrived in the Hague after travelling on some very bad roads. As Lillieroot had not yet left for Stockholm Palmquist would, he assured the King, take every opportunity to get useful information from his predecessor.

Little was otherwise to report, except that Palmquist had been received most courteously in Bruxelles by the Marquis Bedmar (Isidoro de la Cueva y Benavides, Governor of The Spanish Netherlands), the Field Marshal Boufflers (Louis-François de Boufflers) and Mr Quiros (Francisco Bernardo de Quiros). In Antwerp Palmquist had been received by Lieutenant General de Gacé (Charles Auguste de Goyon de Matignon) and at the the fort Lillo by a captain Palmquist calls "Wildschütt", who was in command of a small Dutch naval force stationed there. The captain had dined with Palmquist on his ship and sent him off with a salute of seven shots. 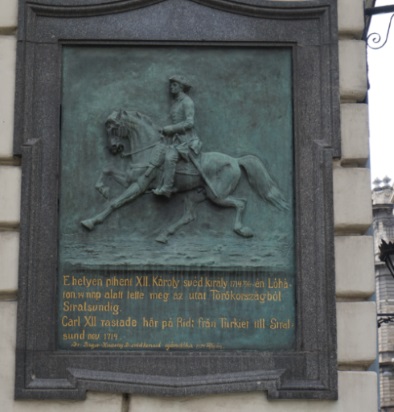 
On 4 March 1705 the Swedish envoy in the Netherlands Johan Palmquist sent a long letter to Charles XII. A part of this report dealt with a most curious proposal. A certain Colonel "Schot" had contacted Palmquist and given him this letter:

"To His Excellency Mons:r Palmquist, Envoy Extraordinary to the Sates Generall of the United Provinces

May it please yo: Excellency

There being two very rich cargoes to come from Chile & God willing in the year 1706 to be ship'd on two good ships.

That if His Most Serene Maj:ty of Sweden &a shall be pleas'd to give protection to the said Ships & Goods which Cargoe shall consist in 800000 Peices of Light, 60000 Sterling in value, in Mace, Nutmegs & Cloves, 20000 pound of Amber de Gri, 70000 pound of all Sorts of East India Goods, 100000 pound of fine Wool & a considerable quantity of Estridge Feather, Rich Drugs, Balsam of Peru & the Ships to be Ballas'd with raw hides, for all which Goods the Princes of Chile doe expect for what their Subjects sell to the Subjects of Sweden to pay no Custom or other payments but for what they Trade for with any other Nation. They are Content to pay 3 pro Cent to the Order of His said Maj:ty of Sweden & c if His Serene Maj:ty permits his Subjects to furnish the Subjects of the Princes of Chile with what Copper, Iron, Armes & what Ammunition of Warr & other Merchandize the Occasions require & take of their Spice & other Merchandize at the price Currant. The said Subjects of Chile will Trade with no other Nation, but the Subjects of His Serene Maj:ty of Sweden & c and the 3 places they pitch upon to reside in are Carilsburgh at the Entrance of the River Weser or Stade on the River Elve or in the Island Coster near Fredricks Hall on the Coast of Norway