Monday March 6, 2006 was a special night in LA. It marked the return of the Rolling Stones to the Inglewood Forum, a venue they hadnít visited since 1975 when they last played a 5 night stand there. Curiously, nine of the numbers we heard tonight were also played on that same stage some 30 years ago! They were Honky Tonk Women, Gimme Shelter, You Canít Always Get What You Want, Tumbling Dice, Brown Sugar, Happy, Itís Only Rock Ní Roll, Midnight Rambler and Jumping Jack Flash. Well, that gave me some solace since I missed those í75 shows, after all I was only 8 years old back then. I think I got a bigger bang at 38 than I would have at 8!

We began the day in the bar at the Four Seasons, which was coincidentally the night after the Academy Awards in Hollywood. The hotel was still filled with various celebs in addition to the Stones themselves. We had seen Dame Judy Dench, Cuba Gooding, Jr., Paul Giamatta, and even got to meet and shake hands with former Oscar winner and this yearís presenter, Morgan Freeman.

Our dilemma of the day was how to get to and from the Forum easily. Our friend Mary D. ended up reserving a car with the Four Seasons for pick-up after the show and thanks to the kindness of complete strangers and fellow Stones fans we met at the bar, we got a ride to and from the Forum. Thanks to Bob, Renee and Mary D! 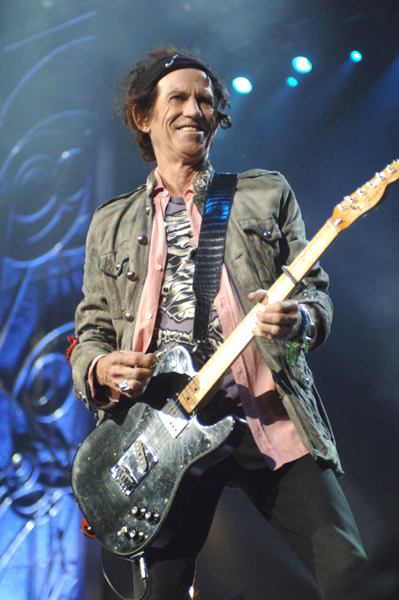 We headed to the venue early & gathered with our friends in the VIP lounge before securing Rattlesnake passes around a Ĺ hour later. The Forum was abuzz, and at one point Mick was whisked by us for an interview into the room beside the VIP & Rattlesnake area. Charlie was inside the Rattlesnake graciously having his photo snapped by various fans and admirers. We first had a chat with Tim Ries, sadly weíd have to miss his Rolling Stones Project show this time, since he was playing the following evening and we were leaving town. Next we saw Chuck & Rose Lane Leavell and congratulated them on becoming grandparents. The place was packed and it was the largest Rattlesnake Inn by far that weíd seen this tour. Patti Hansen, Keithís wife, and his daughter Theo were seated near us when we finally managed to find two seats. The funniest thing happened when the opening act came onÖthe bartender was told by someone who was apparently clueless, to shut down the bar until the opening act finished, so we could all leave and enjoy the opener. What?! I knew he was mistaken, and tried to tell him so, as most of the people in the Rattlesnake were certainly not going to be leaving to catch an opening band, no offense to Queens of the Stone Age or their special guest Billy Gibbons of ZZ Top. Finally a Stones staffer told him he needed to reopen the bar, people were thirsty!

When the Rattlesnake closed, we needed to use the restroom, and they arenít fond of people lingering in the Rattlesnake after it closes, so everyone was shooed into the hallway. Luckily, Stones security knows weíve had this predicament before and let us use the private restroom in the room where Mick has been interviewed just moments before! We made our way down to the floor and to our seats, which were on Ronnieís side, surprisingly. The seating map had told us otherwise. But, we certainly werenít going to complain since we were in the front row!

It was hard not to think it was a bittersweet moment, this was after all, going to be the last show of the US Tour for me. When the lights went down at around 9:15pm, and Mick, Keith and the boys hit the stage in the darkness, you knew they meant business. They seemed relaxed and in fine form from the get-go. The setlist was as follows:

We knew we were in for something special again when ďSwayĒ cropped up as the 4th tune. It was crisp and polished, perhaps better than the previous two times Iíd heard it this tour. But, it was the song that came next that floored and surprised us all-ďFar Away EyesĒ! First time this tour! The first line I sang as ďThank you Jesus, thank you LordĒ and I meant it. Perfect for the LA Forum, a place that doubles as a church these daysÖRonnie was on slide, Mick on guitar and when Mick sang ďWell the preacher kept right on saying that all I had to do was send ten dollars to the church of the sacred bleeding heart of Jesus located somewhere in Los Angeles, California and next week theyíd say my prayer on the radio and all my dreams would come true so I did, the next week, I got a prayer with a girl well, you know what kind of eyes she gotÖĒ the crowd just erupted. Keith was singing harmonies, ďso if youíre down on your luck, and you canít harmonizeÖĒ. It simply made the Forum show all worth it.

And, as if things couldnít get any better that was followed by Mick sitting down at the keyboard, which meant one thing ďWorried About YouĒ. I love when Mick says ďBABY!Ē in his falsetto. Beautiful. ďMidnight RamblerĒ what can I say? I can never hear it enough, and Iíve heard it so much that old adage, ďthe next version will be the best one I hearĒ always rings true. Whe Mick did the intros he went over the Charlie and said something, which prompted Charlie to utter ďNOĒ into the mic, a rare moment to hear Charlie say anything during the show and it got a laugh. During Keithís set I was happy during ďHappyĒ to see that Keith was still wearing the silver sequined belt I had given in back in Chicago in January. When we made it to the B stage, we were in the back corner on Ronnieís side. ďRespectableĒ was the surprise we got there. The boys were bouncing around, Mick towered over top of us several times.

The usual warhorses ended the show for us, a sudden sadness during ďYou Canít Always Get What You WantĒ, but I guess this tour I may not have gotten everything I wanted, but I sure did get what I needed. The confetti fell on our heads and the last rings of ďSatisfactionĒ filled the air and it was over.

We headed out to find our friends, found a great bootleg long sleeved t-shirt and found our waiting towne car thanks to Mary D. and jumped in. Back to the Four Seasons for our last after party. Goodbyes to Tim, Darryl and Blondie. Patti & Theo were in the bar again. Upstairs to bed with wonderful memories of A Bigger Bang 2005-2006 US Tour. 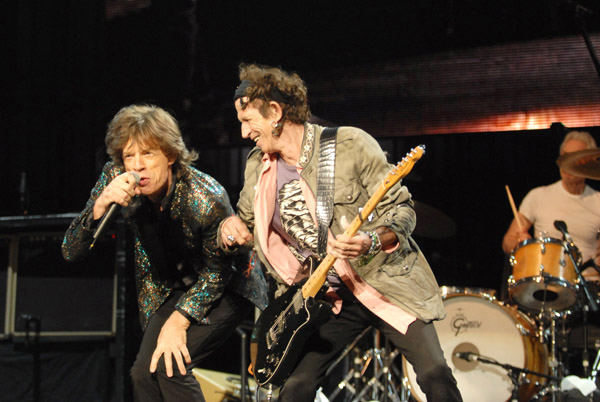 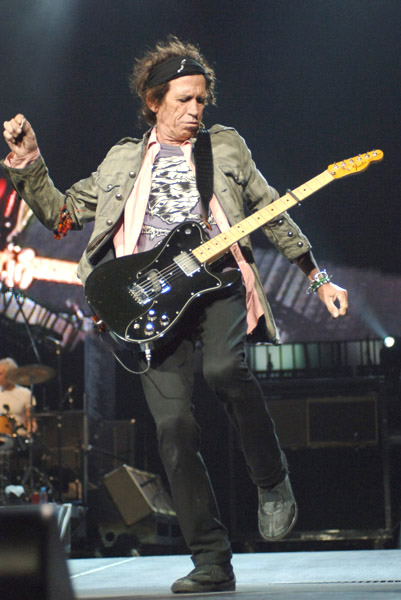