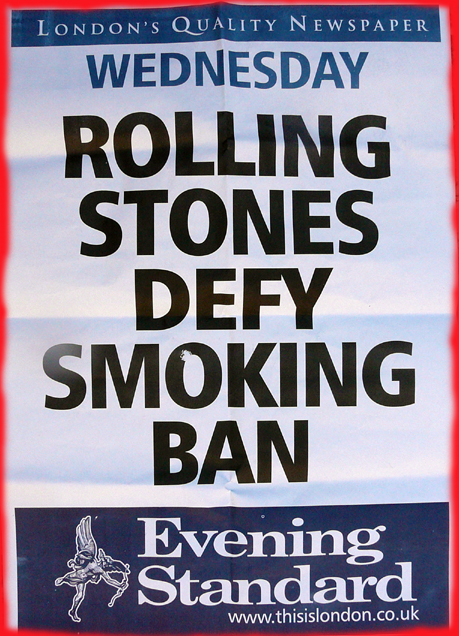 We arrived in London via Gatwick Airport on Sunday August 19. The weather was typical for London, grey, rainy and chilly. We stayed at the Lime Tree Hotel B&B, just around the corner from Victoria Station, on a quiet side street in Belgravia.

On Monday we went to the Savoy Hotel to pick up our Stones tickets. We were delighted to learn we had 3rd row Keith's side for the 21st and Keith's side on the aisle in the second floor section for night #2. Sadly, we weren't able to stay in London for the last 02 show on Aug. 26.

At the Savoy we ran into Blondie and he invited us to the bar for a drink (thanks for the beer Blonz!). Later I said hellos to Tim Ries and Bernard and some Stones friends I hadn't seen since November in the States.

While in London we managed to see some of the traditional sights such as Buckingham Palace, the British Museum, the Tate Britain, the Tate Modern and the National Portrait Gallery, as well as the Tower of London. We saw most everything else from the outside only by taking a London double decker bus tour and a Thames boat cruise. We walked around Picadilly Circus, Chelsea and Covent Garden as well. Sadly, I never did have time to visit the various Stones sights I had hoped to see, such as Keith's old house in Chelsea and Edith Grove, etc. 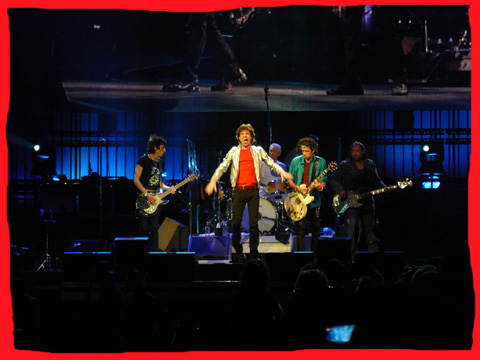 Finally it was show night and we took the tube from Victoria Station to the O2, a very easy and convenient trip. I ran into my old friend Graham as we exited the escalator, so that was an unexpected but nice surprise. Last time I was in London, I had stayed at Graham's house in Cambridge and he drove us to all the UK shows (1999). We had Rattlesnake passes for tonight (thanks to my dear friend BB), and at 5:30 we ran into Blondie's friend Steve and he took us up to the lounge early. This was the biggest, most fabulous Rattlesnake to date, obviously they went all out for the home town crowd. The place held 300+ people, and had soft seating areas with coffee tables, as well as pub tables and stools. Giant tongues were projected onto the walls and we were directly behind the stage curtain. 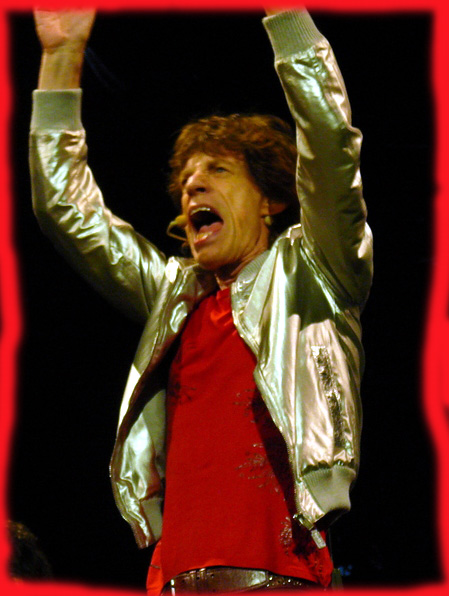 Tonight there was an Indian food bar, as well as the typical fare of fishes, meats, pastas, shepherd's pie and a huge dessert table filled with the most enormous selection of cakes ever. They also had a full bar staff, with Boddington's on tap! We sat at a soft seating grouping and after the backing band and personnel had mostly finished eating, we grabbed some plates. Around 6:30pm the Stones had a sound check, much to my delight. They ran through Beast of Burden, Rocks Off, Angie 2x, Shine A Light (wow), and Keith did You Got the Silver. That was a treat hearing soundcheck. Now, if only they would play Shine A Light I prayed. 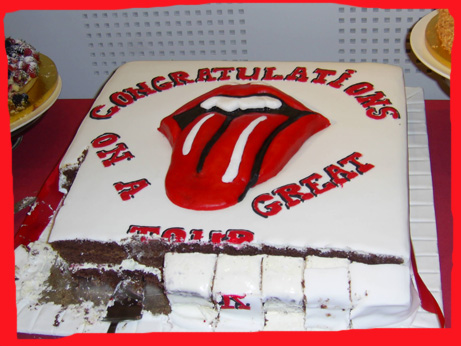 Soundcheck didn't finish until 6:30pm, so I think doors may have opened later than 6, or else they just didn't let people into their seats until 6:30pm. The opening band was the Kooks, and they sounded ok, we were directly behind the stage so we could hear everything quite well.

Mick's girlfriend L'Wren spent some time chatting near our table...man is that girl tall and skinny! By 7pm it was a zoo backstage and the place was packed, but it was a huge room so it accomodated the large crowd well. We left for our seats around 8:30 or so.

Security was so non existent that we never even had our ticket ripped or checked! Once on the floor we saw tons of people we knew and were sitting next to Bjornulf from IORR. Said hello to Angela Richards again and her husband Dominic, it was so nice to see them again.

The show itself was fun and I enjoyed it, but it wasn't one of my all time favorites. I think partly because security let the front aisles get crowded with people who didn't belong there, and a certain guy in our aisle left his seat and squeezed by us for beer literally 15 times during the show.

My faves of the night were Rocks Off (even though they messed up the ending), Beast of Burden, Let It Bleed, Can't You Hear Me Knocking and I'll Go Crazy (since I hadn't heard that one yet). Lisa was awesome.

I did manage to get front of the B stage on the rail on Keith's side so that was nice, and Respectable was different to hear again. I thought they were good tonight, but not great, but I think it's just because there weren't any major surprises for me in the set and the lack of security in the front meant there was tons of people trying to squeeze into our row and then blocking our view sometimes. I also had come off a total high in Vegas and Atlantic City with those stellar arena shows, and it was hard to top those for me, even if I was 3rd row in London.

I left tired and happy and looking forward to what the 23rd would bring.

On the off night I went to see Tim Ries at the Astoria 2 (Mean Fiddler). I saw a lot of great Stones fans there, and even briefly went backstage. Blondie was in the house and Lisa Fischer was a special guest. She and Bernard did the most killer duet of Ruby Tuesday, it brought the house down. The gig also raised a lot of money for charity, which was cool. I ran into Tony Dunn near the end of the show, which was great. Another fun night in London. I skipped the after party since I had to catch the last tube train back to the hotel. 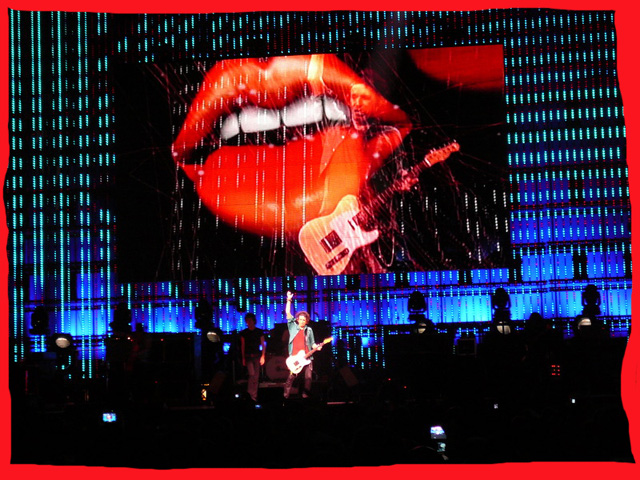 On Aug. 23 I went to the show by myself. I talked my way upstairs at 5:30pm again and ended up being invited to sit with Tim Ries and his wife for dinner, which was sweet of them. Tonight's Rattlesnake featured a fresh made pasta bar. Later I ran into Tony Dunn and his friends and they joined me for the rest of the evening. I had some quick chats with Bill and Preston, thanks for the guitar picks guys! And then it was showtime. 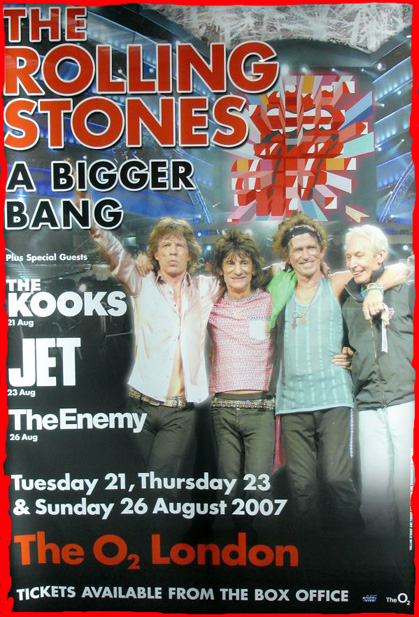 Oh what a night! I certainly thought tonight was better than Tues. night. The sound was crisper and the guitars were LOUD. Mick commented on the front sections being filled mostly with his and Charlie's families. From the moments the gates opened and the tigers came out, they rocked the house. I didn't find there to be any real mistakes tonight and the crowd seemed more enthusiastic than Tues., at least from where I was sitting.

All Down the Line was buzzing with guitars and I thought they did a very decent version of She's So Cold. The absolute highlight of tonight's show for me was Shine A Light! Wow. Brilliant. I waited a long time to hear that song played live and finally tonight during my 75th show I got it! I had asked Tim Ries before the show to put in a good word for it, afterall he plays keys with Chuck on it. I was afraid they were saving it for Sunday since they rehearsed Angie as well. I shed a tear during that one, it was a moment when time stood still. Rambler was brilliant as always, Keith was fun to watch during that one. I'll Go Crazy was enjoyable again with wonderful horns and the lovely Lisa stealing the show.

Keith didn't change his set, but did a nice job and always adds new lines to Wanna Hold You. He lit up again and said "might as well get busted!" It was a classic line delivered perfectly as he took one drag and flicked it away. I went to the B stage and got front rail this time. Great view of the entire set and tossed Keith a scarf during HTW. As the streamers fell from the ceiling I was thankful that I was here to see the boys one last time on their home turf...but Mick did say that the press is making a big deal out of these shows being the last ones and he basically said it's not true!

During the final bow I saw my scarf around Keith's neck among a multitude of other scarves he's collected. On the way out the doors I was interviewed by UK TV who asked me if the Stones should hang it up? Hell no, they are better than ever I said! Goodnight from London. 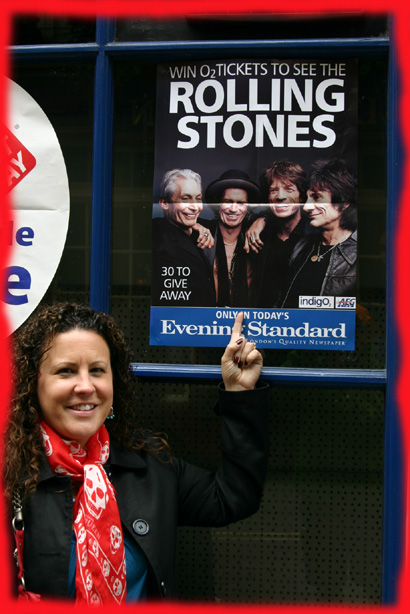 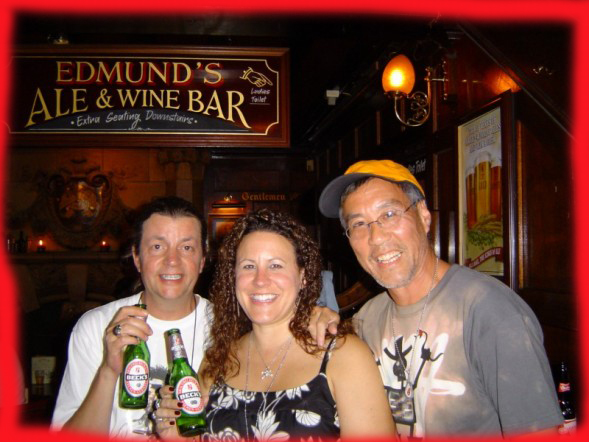 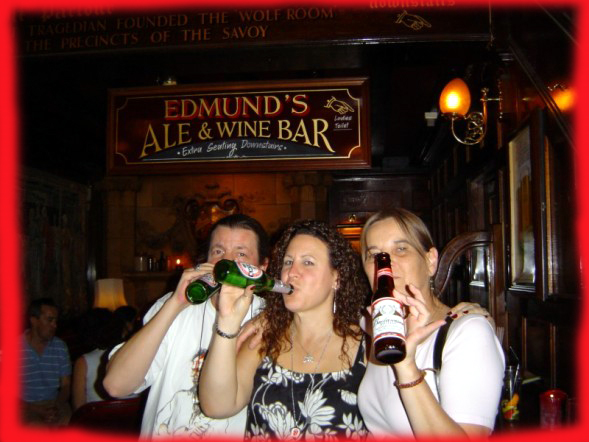 On Saturday evening I got together with my great friends Hans and Anne from Holland. We went to a pub next to the Savoy for some beers and catching up. Blondie showed up later as we were getting ready to go to dinner and ended up joining us at an Italian place across the street. Later we ventured back to the Savoy American Bar where we hung out until 11pm. Once again, I had to catch the train back, and we were leaving London the next day. 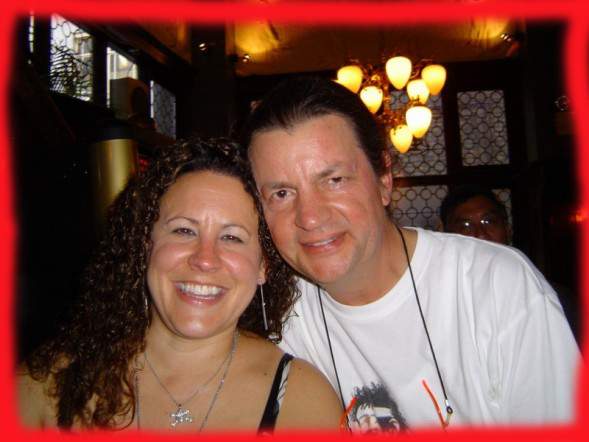 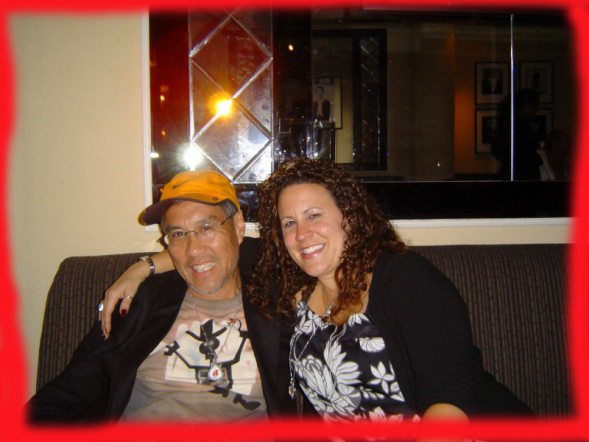 I just wanted to say an enormous THANK YOU to all the people who made this a great tour for me, specifically Shelley and the team at SLO Ltd., Bill, Preston, Blondie, Tim & Bernard! Without all of you, I wouldn't have had half the fun I have had during A Bigger Bang. And of course, thank you to Keith Richards and the Rolling Stones for another fabulous tour! See you all in 2008!!!! 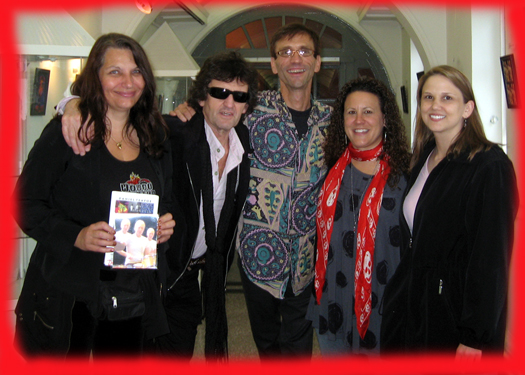 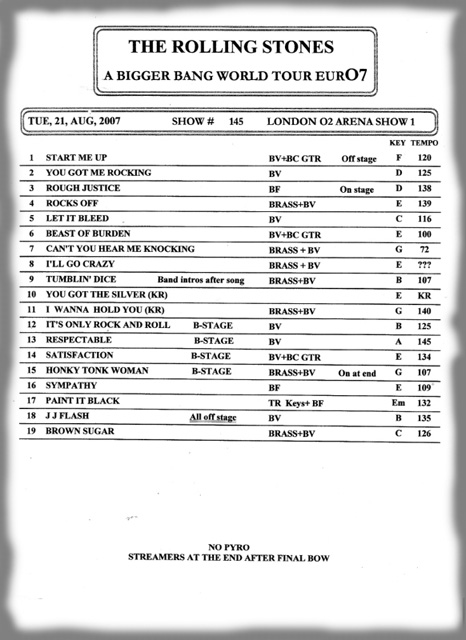 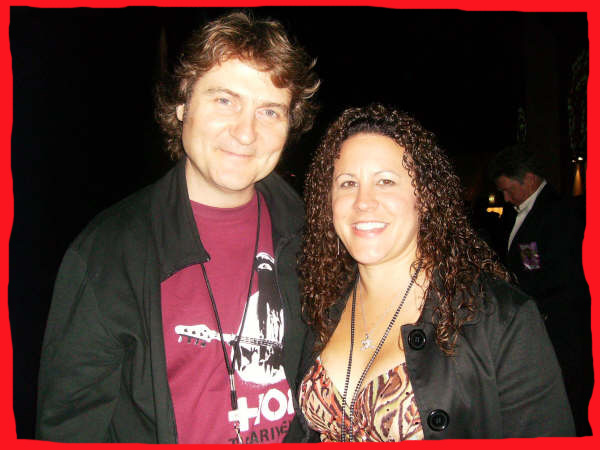 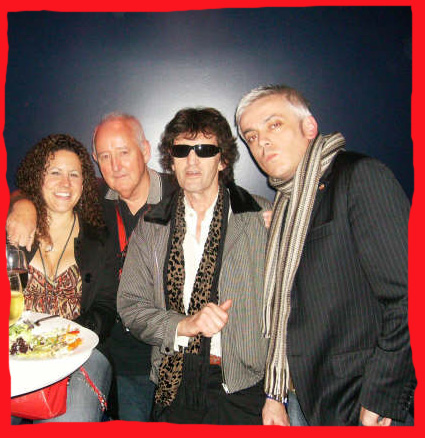 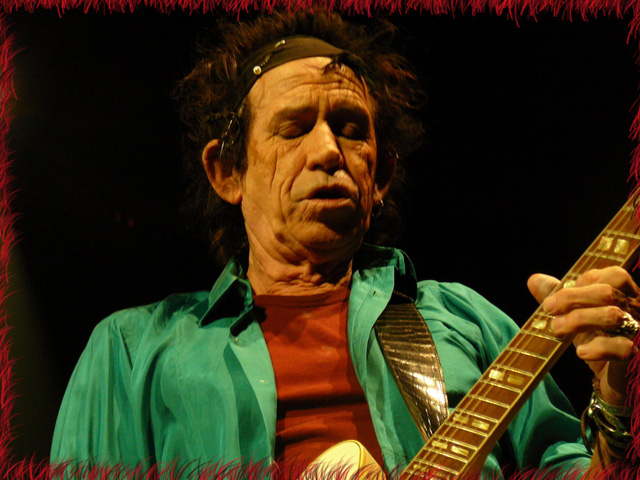 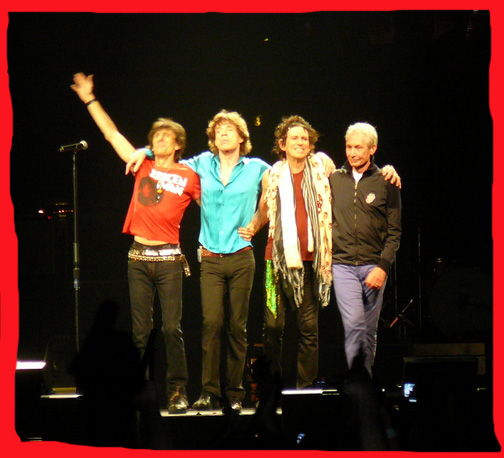 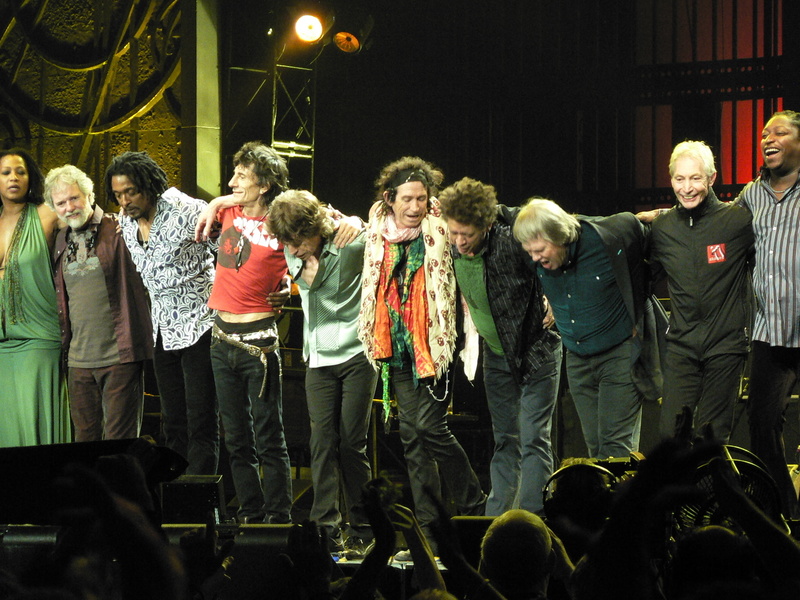