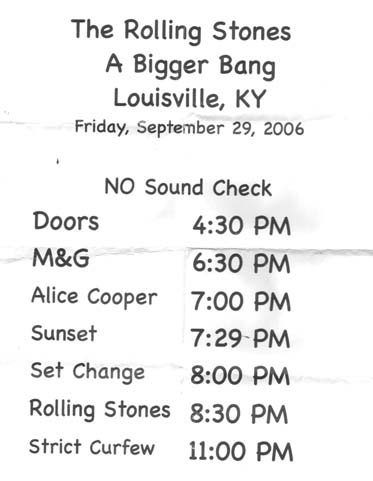 Seeing the Rolling Stones play in a unique, historic venue that has never seen the likes of a rock concert before, isn't always what it's cracked up to be...especially in a torrential downpour.

Last night the Stones played Churchill Downs in Louisville, KY, the famed horse racing track and home of the Kentucky Derby. After a 7 hour drive with beautiful weather, we arrived on time at our hotel, checked in without hassle and were headed for what looked to be an on-time schedule with the hope that things could only get better.

Met some friends who flew in from NY, VA & IL and they, along with my husband tried to catch a shuttle bus to a pre-party near Churchill Downs.

We waited around 25 minutes until we were told the shuttle came early and we had missed it! Ok, so plan B, was a taxi, that worked out fine, as it was a van & we split the ride between 6 people. It didn't explain how we would get back though!

The entire downtown area was swarming with Stones fans and as we got closer to the track, the atmosphere swelled with excitement. The pre-party at a bar/restaurant called Beef O'Brady's was packed. I met my old friend Kazdog I hadn't seen since 1999 in London, so that was cool. An airplane sailed overhead with a banner that read "Got Mick?"

The gates to the venue opened at 4:30, which didn't explain why we couldn't pick up our tickets until after 6:30. We walked over a bit early, arriving at 6:10, only to find that the Band Will Call window was already open and a long line had formed. We secured our tickets and passes and then went through the airport-like security check. We had to remove coats & jackets, purses were thoroughly (and I mean thoroughly) searched. Men had to empty their pockets into bowls & we all got patted down as well.

Now began the hassles. We entered at Gate 17 and there were no signs for any of the lounges or parties. Not a single security person we encountered had a pass list or any sort info that could help us. People tried to direct us to the "On Stage" seating party, telling us we needed escorted to go there. That wasn't what we were looking for! I couldn't believe it, but this was truly becomming Rotterdam 2003 all over again. Deja vu of a night we spent 2 hours searching a venue for the band lounge & never finding it...until it was 10 minutes till closing time. How frustrating is that?

We headed to the Turf area for which our hands were stamped, being a horse racing track, the entire place was extremely difficult to navigate and you had to walk for what seemed like miles to get from one place to another.

After many phone calls to my friend BB, who tried in vain to help us, God bless him, we basically had given up. Very sorry for the hassle BB! Alice Cooper had started his set and as we stood down beside the stage Alice threw out his cane and almost hit me in the head, the guy beside me caught it! Sheesh. Not wanting to be impailed by any other items that Alice threw off the stage, we were told to look for a tunnel that went below the track and headed the back stage area. We again, searched in vain for about a 1/2 hour as Alice Cooper played on.

Finally, exasperated, depressed and tired, we headed upstairs to the VIP lounge for a beer. Once upstairs we encountered a Concierge named Angie (!) who kindly took us down a service elevator to the Rattlesnake, but being 8pm, they told us it was closing, we couldn't come back and so after all that, we headed another 10 miles back to the VIP area at 8:10.

While we had been in the tunnel underground, the heavens let loose and when we got back to track level it was a torrential downpour, and half the fans were huddled under cover seeking trash bags and $10 ponchos to keep them dry. So much for the weather calling for "partly cloudy this evening, with 40% chance of showers late".

Upstairs, we drank a few Heinekens and had some mixed nuts before heading next door to the Radio Shack area to secure some ABB cake!

At 8:30 we headed to our seats, and it was raining like a mo'fo. By the time we got to our seats and got rid of the extra 12 people who were standing in our seats we were drenched. As the lights dimmed, and the crowd roared, I decided to forget about my pre-show fiasco and just relax and enjoy the show & the rain.

The boys opened with Jumping Jack Flash and Mick emphasized "and I howled at my ma in the driving rain!". Mick donned a hat and matching coat, probably well aware that rain gear would be an essentail part of his wardrobe after Halifax. Keith wore Gary's hat again, and I was pleased to see he had the blue & white skull scarf I had given in him in Boston tucked into his waist beneath his guitar.

Mick welcomed Kentucky and eluded to the "sacred hedge" which separated the front row from a very high stage and thanked us for putting up with the "shitty weather". Some people told me that tonight's setlist was awesome, but aside from "Dead Flowers", which is a favorite tune of mine, it was more special hearing "making bets on Kentucky Derby Day" while standing on the same hallowed ground. "Let's Spend the Night Together" was the only other entry that provided some spark for me. I did enjoy "Streets of Love" tonight, I couldn't tell if I cried, or if it was just the rain in my eyes. Mick was very energetic, and I think tried his best to involved the poor folks in the grandstands whose seating stretched unGodly far away from the stage, making the video screens on either side of the stage essential for their viewing.

Keith came out & commented on not caring about the weather, he takes it as it comes. I can't complain about hearing "You Got The Silver" and "Little T&A" again, I love those tunes, Ronnie doing a spectacular job once again on acoustic slide.

I had my camera, but didn't take any pictures since I was flanked by about 4 venue security guys and one Stones security guy. But, I did admire some shots of Mick & Keith in the walkway as the rain fell down that would have made fantastic photo ops!

I tried to get to the B stage, again since this was such an odd venue, you couldn't walk straight back the catwalk or you rain into a railing, which I did, so I stayed at the back corner near Darryl. I was disappointed that Miss You was back in the set, instead of Under My Thumb as the B stage traveled out. The B stage and main stage were remenicent of Hershey-all way too high.

Back to the main stage for Sympathy, Mick seemed to have a little trouble on the start, but it picked up momentum & the crowd joined in on the wooo, wooos. Keith finally came to the front of his side of the stage as the rain had let up, during Brown Sugar and played some nice riffs right in front of me. I had the same blue & white skull scarf hanging on the railing for him. I enjoyed the singing on "You Can't Always Get What You Want", probably because it was my theme song of the evening.

During the final encore of Satisfaction, Keith came out on the ramp right beside me and above me and said something directly to me, I wish I knew what it was! All I could say was "love ya baby!". The final bow was sweet, the guys looked really good. All in all, a good show, not a great show, the rain made it a special show, and I certainly won't forget my adventure at Churchill Downs!

Getting out of the venue was even worse than getting in. There was literally one walkway to get off the turf area! People were jumping fences and climbing over barriers to get out. We were squished like sardines, and after about a 1/2 hour made it outside, only to have to walk back to the bar, and by the luck of God we caught the last shuttle bus and the drive graciously took us to our hotel.

Met up with my friends in the lobby bar, and had my first food all day! I'd been on go since 4:30am and hadn't had anything but that one piece of cake. I was starving! After a few Amstel Lights and 1/2 a cheeseburger we called it a night at 2:20am.

The following day, I saw Charlie & Ronnie leaving the hotel, and later chatted Chuck & Tim. Mick was the last to leave at almost 4pm. They were headed to the next show in Wichita, KS. I'll be back on the road in Chicago next week, Oct. 11. 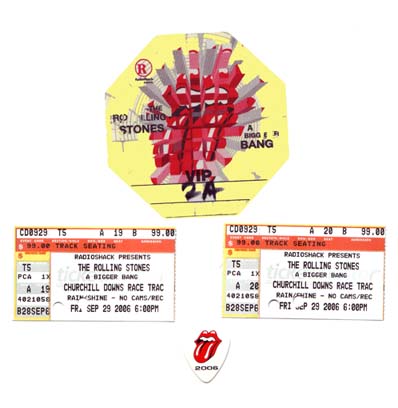 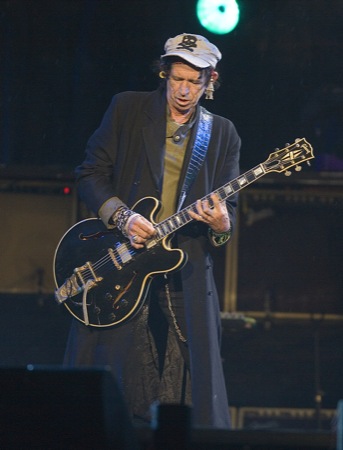 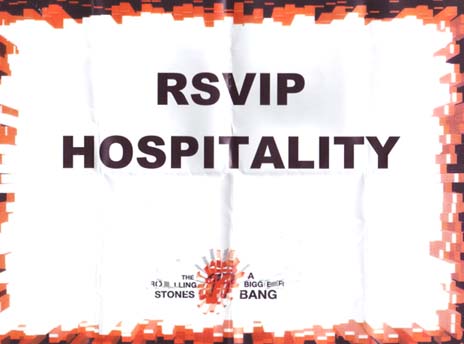