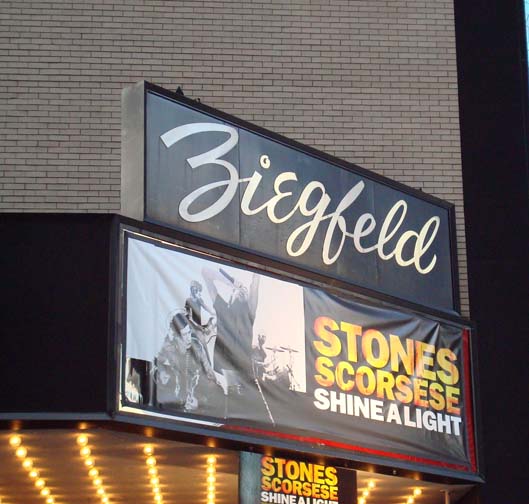 All Photos copyright Blue Lena unless otherwise noted
Shine A Light New York City 3/29-3/30/08
On Saturday March 29 I traveled to New York City and met my friend Isabel at LaGuardia Airport for our Shine A Light Weekend. We took a taxi into Manhattan and checked into our hotel near the Palace Hotel. We shared a few Amstel Lights in the bar while waiting from word from Paramount on passes, etc. Sadly, Paramount at the last minute did not come through, which was a huge disappointment considering I have promoted this movie for them for the past 2 months. But, no matter, we would have fun anyway!

We headed over to the Palace in the evening and met up with a music journalist friend of mine from LA who was covering the press conference and red carpet for the LA music scene and for Stones Planet Fanzine. She had seen the premiere the evening before and was in the midst of writing her fabulous film review, which appears on Stones Planet. Shortly thereafter I ran into Bill, Keith's bodyguard, and we tried to catch up a bit, although there were many fans in the lobby demanding his attention. I also saw my friends Ligia, Jayme and Kevin who were headed out to dinner and we agreed to meet up later in the evening.

We walked down to the Ziegfeld Theater a few blocks away to check out the set up for the red carpet. A white tent was already in place and they were laying the carpet...which was black, not red. We chatted with the theater manager and 2 of the security guys and I took a photo of the sign out front, which at that point only had a very tiny Shine A Light sign attached to it. 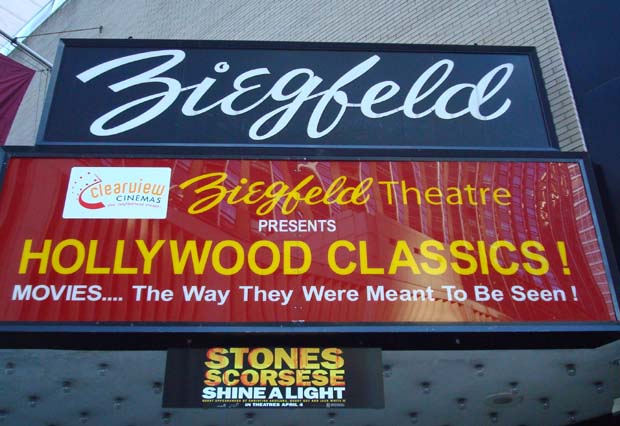 From there we headed back to the Palace, but not before Isabel got a message regarding an art show that Ronnie was having at Pop International Gallery that evening. Ronnie was expected to arrive around 9:15pm. So I called my friend and she said she'd do her best to get us on the list..she called back around 8pm and was successful so we grabbed a cab and headed to Soho, arriving at 8:30pm. The gallery was packed and the exhibit featured not only Ronnie's latest works, but the best of Sebastian Kruger as well. We browsed the gallery, thanked our friends and got a glass of wine downstairs. Around 45 minutes later we heard a cheer and applause and in walked Ronnie through the front door accompanied by a bodyguard and curiously, not accompanied by Jo Wood which is unusual. 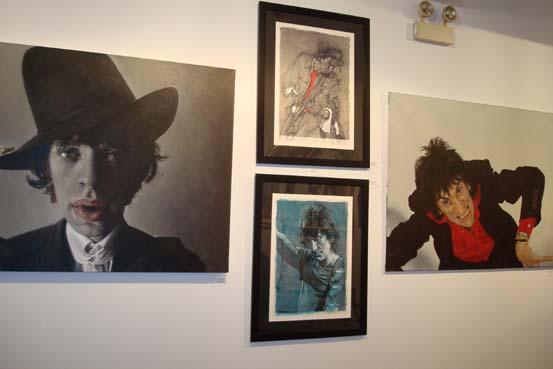 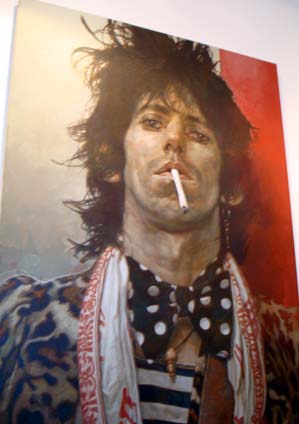 Ronnie was in very good spirits and didn't hurry through the crowd tonight, he mingled with the fans and prospective buyers and posed for several photos while making his way to the private back room. 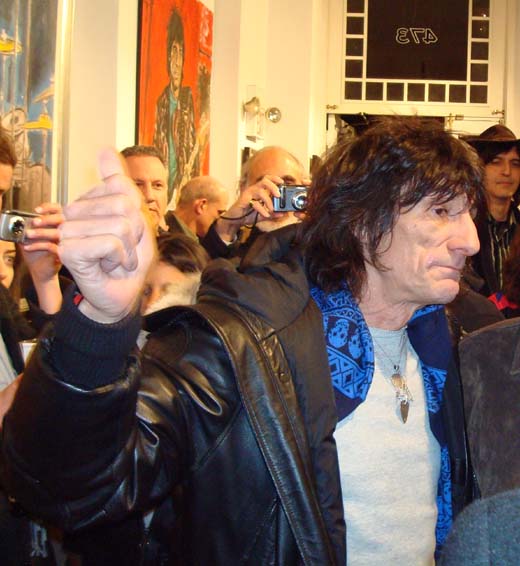 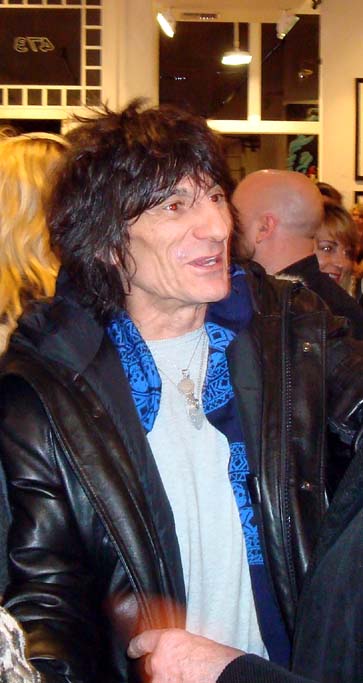 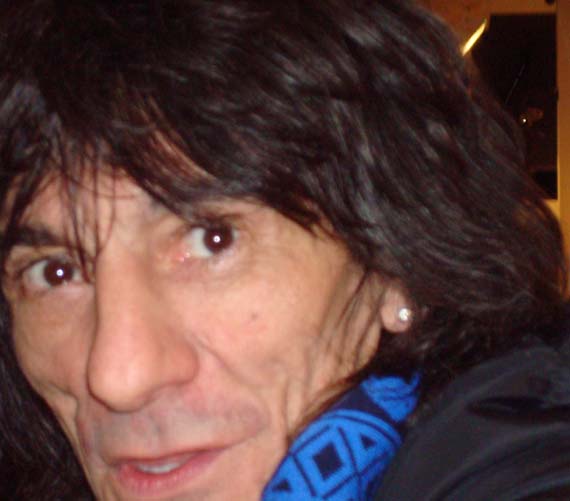 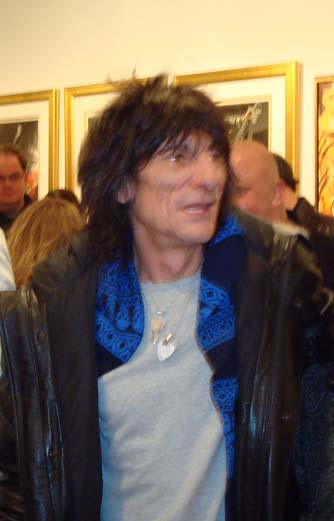 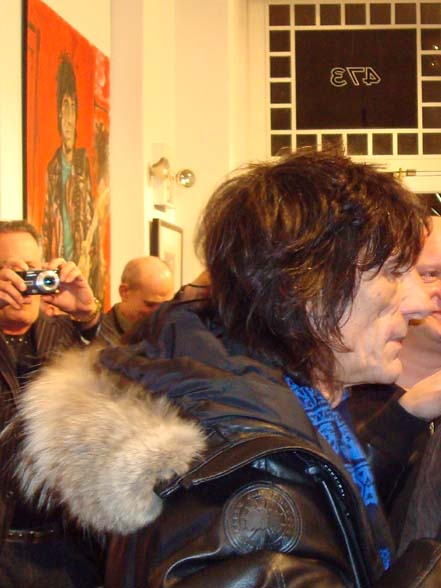 My friend was able to go in and take a few more pictures with Ronnie as well as get her photo signed by Ronnie, which was cool. 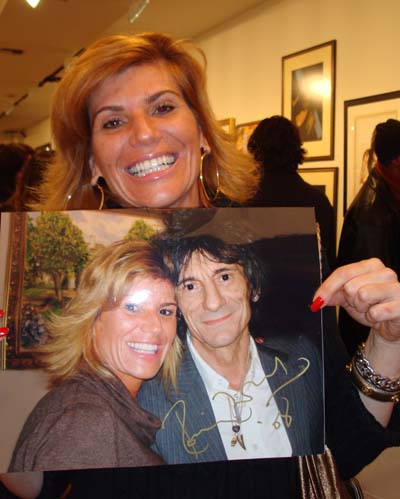 When Ronnie left around 30 minutes later, I handed him a copy of the Autumn issue of Stones Planet Fanzine which featured a cover shot of him taken by fan Jim Pietryga. Ronnie said "Thanks luv" and gave me a kiss. They wrapped up the art show about a 1/2 hr after Ronnie left and we contemplated getting sushi or Mexican, but the wait was too long, so we headed back to the Palace and thankfully got one of the last tables in the upstairs bar. We ate, drank and discussed plans for going to the after party on Sunday evening before heading back to our hotel around 2am.

On Sunday we headed to the Palace again around 1pm and had a nice brunch in the restaurant. We then moved to a table in the bar area where we could watch fans and press people mingling in the lobby. We sipped Pinot Grigio and got periodic updates on the press conference from some of our friends who were covering it. The afternoon went by really fast, the press conference itself was only 24 minutes long. We had a chat with Matt Lee for a bit & checked out the press passes and goodies he received. Soon after we saw Ronnie and Keith leave the hotel, so we walked down to the Ziegfeld again. 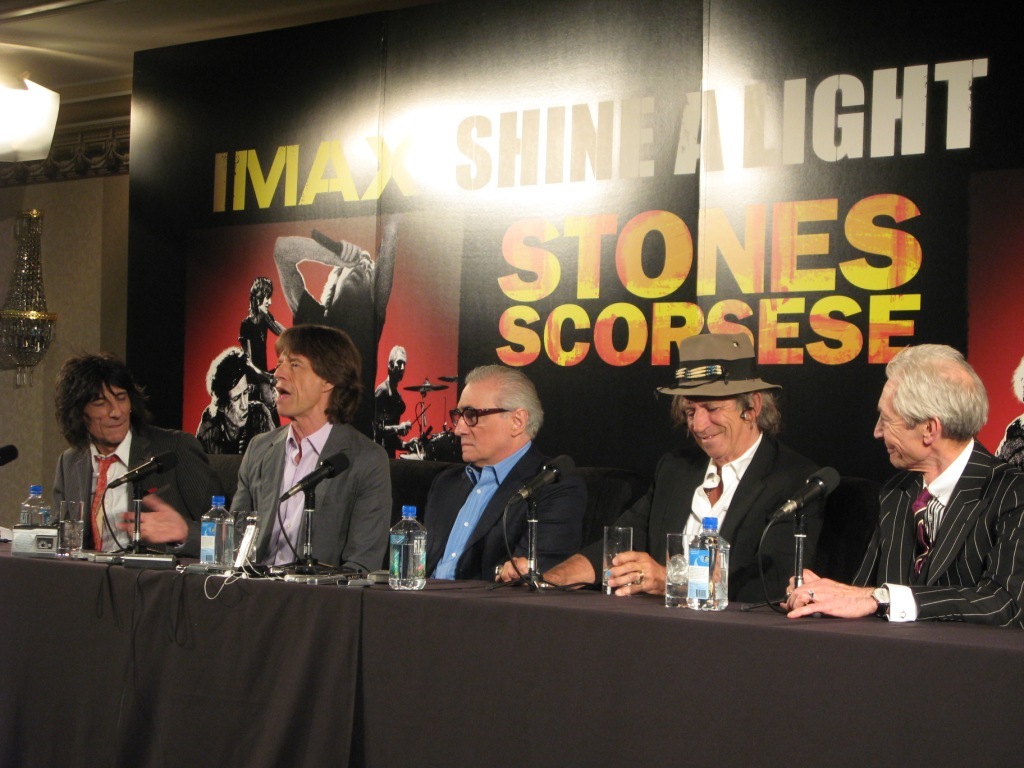 We were able to see Mick & L'Wren, Charlie, Ronnie, Keith, Martin Scorsese and Albert Maysles arrive. We also saw Blondie & Bernard and they posed for me across the street before going in. 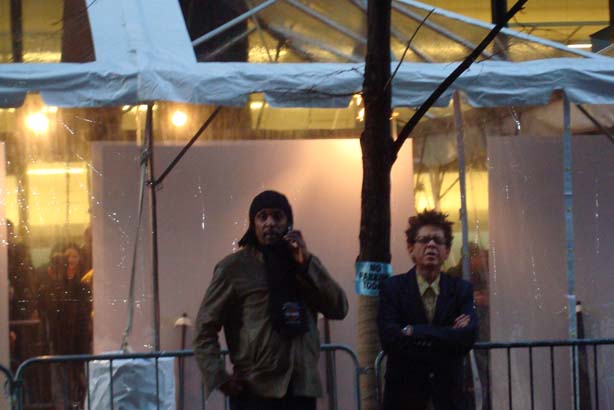 We chose not to stand down by the doorway where all the other fans were waiting because then we could see the Stones enter the tent, but also got to see them all a second time as they left the tent and entered the theater lobby. It was too hard to take pictures since the barriers prevented us from being on the same side of the street as the theater. We knew the Stones would not be staying for the whole movie and would be exiting early, but instead of waiting for their exit, we made our way back to the Palace to secure a decent table in the downstairs bar since we knew an after party was to begin in the upstairs bar at 10:30pm.

We had a table within the bar area and surprisingly Lisa Fischer came in with a friend and sat next to us...but she had quite a hairdo that almost made her unrecognizable. We had to do a double take and say "Is that Lisa?" It was.

Later we moved to a table next to the stairs so we could see all the arrivals. We saw Charlie, Shelley, Victoria Pearman, Tim & his wife, Lisa, Darryl, Bernard, Blondie, Theo Richards and tons of movie type people we didn't recognize enter the party. We chatted with Shelley after she left to get her impressions of the movie. Later Bill came out of the party and we chatted a bit and took a photo together and he informed me that there was no point in going into the party since Keith and Mick changed their plans and didn't show up. Bill had been head of security for the night, but called it a night himself around 1am or so. 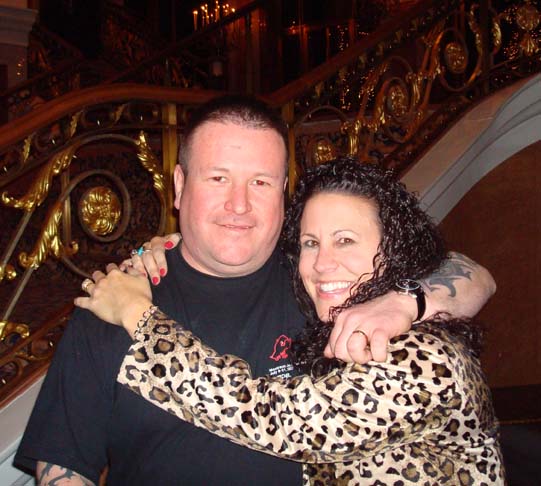 Well, we decided it was still worth checking out, especially since the downstairs bar was now closed, lol. So we entered the party around 1:30am and ended up staying until it closed down around 4am!

Ronnie, Tim, Bernard, Blondie, and Theo were still at the party, as were several movie types and assorted models and beautiful people, but it had definitely cleared out by this time. We got a glass of wine and talked with Tim and his wife about his upcoming Stones World cd release which is now delayed. We spoke with Bernard and Blondie and some friends of theirs and then secured an open table right next to Ronnie's. Later we saw Anthony Mathile and his girlfriend, he used to do the photos and video on the Licks Tour before Jake Cohl began. They were a great couple and we ended up hanging with them the rest of the evening. 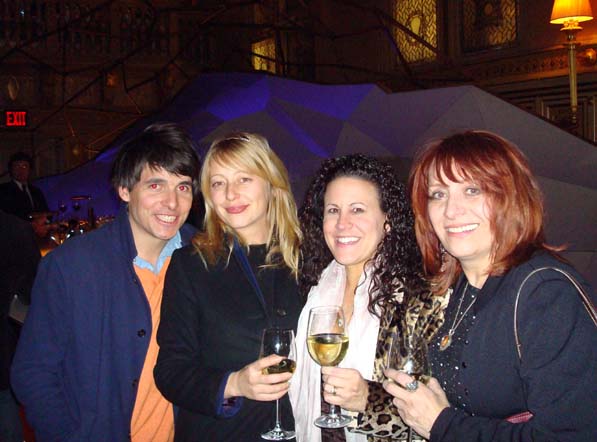 When Ronnie got up to leave around 3am, there were maybe only 12 people left in the back room with us, and Ronnie went around and said goodbye to everyone. So we just got in line for the goodbyes and when it was our turn Ronnie grabbed each of us and gave us a big hug and kiss and he wildly exclaimed "I love this!" It was great. They then closed the back room, and we moved to the main bar area where we continued to chat with Matt, Anthony & Sarah until around 4am.

We headed back to our hotel, but not before stopping for big bottles of water, latte and breakfast sandwiches at Starbucks. We got to bed around 5am. So even though we didn't get our press pass or movie pass, we felt the weekend was well worth the trip!

"May the good Lord Shine A Light on You, make every song you sing, your favorite tune!" 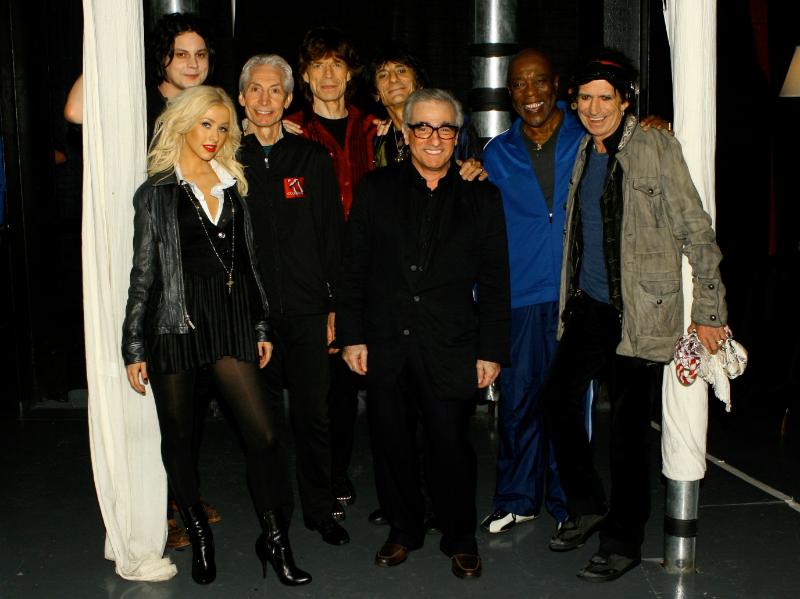 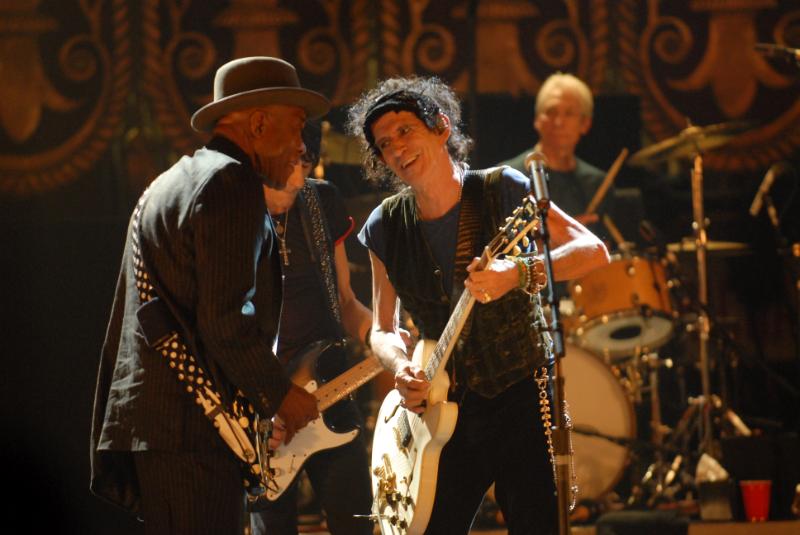 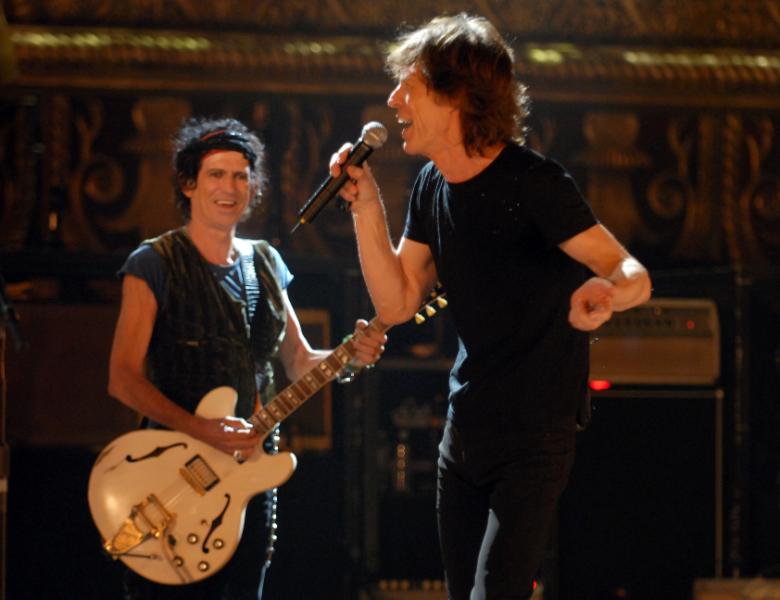 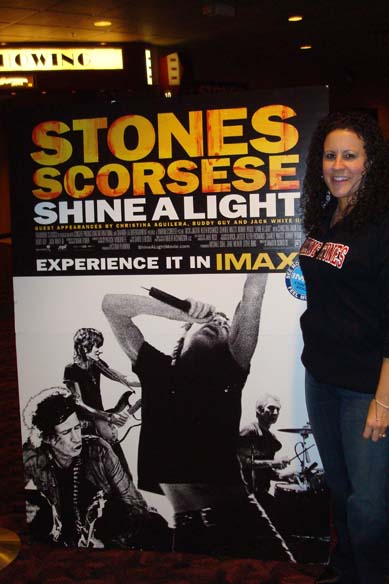 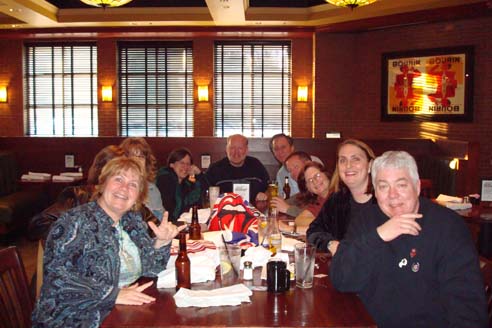 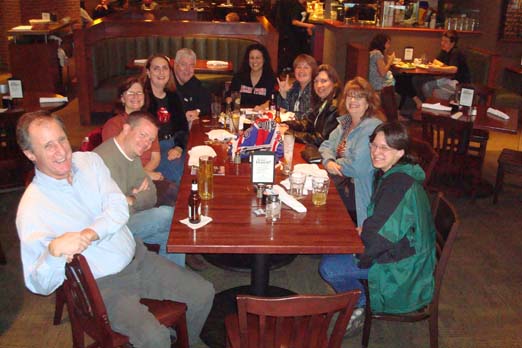