Another Night at the MGM Grand

From the Tour Diary of Blue Lena

I had arrived in Vegas on the evening of Thursday March 2 and being jet lagged and tired, all my husband and I could muster was to eat at the Flamingo buffet and go to bed early! We must be getting old. On Friday we spent the day shopping & dining, the all you can eat sushi buffet at Todai in Desert Passage is delicious. I also picked up my tickets at the MGM, and was delighted to discover I had scored front row on Keiths side! Wooo Wooo! This was going to be my third Stones show at the MGM Grand, but my best seats ever by far. 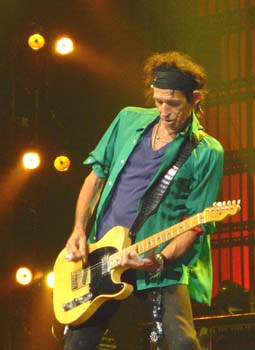 My friend E flew in on Saturday afternoon and the three of us made a trip to Madame Tussauds Wax Museum, where I got a great picture with Hugh Hefner, hahaha. They have the most awful wax rendition of Mick Ive ever seen! We cruised through the Venetian and then headed back to the room to change for the show. Since this was Vegas, we got a bit more dressed up than usual and E splurged by bringing a bottle of Dom Perignon in her bag, which we sipped before leaving the hotel room.

Friday afternoon at the MGM I had checked out the Grand Garden Arena, and discovered they had walk through metal detectors and tables set up for searching bags. This concerned me because I was hoping to bring my camera in. I had only taken photos at a few other shows this tour and since was near the end, I wanted to squeeze in a few more shots. I called the MGM box office to clarify, since the tickets did not say no cameras this time. The lady at the box office said cameras would be allowed, no video. Great! 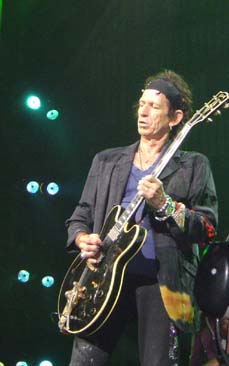 Upon arrival at the Grand Garden, the line was already forming and an old lady security guard was shouting no cameras, no cameras of any kind, even small ones, please check all cameras before entering. Shit. I started to worry. We switched out of her line, since none of the other security people seemed to be mentioning cameras, and when a woman with a backpack went in unchecked, I knew Id be ok. We went through the metal detectors without a hitch, but the gates into the venue still werent open. Soundcheck was running late, so we waited in a claustrophobic lobby by the merchandise stand until we were finally let into the venue some 20 minutes later.

We headed downstairs to the floor area, and ended up outside the backstage area. We had Hospitality passes, but not our Rattlesnake passes yet, so we hung around a bit. I chatted with Blondie briefly and then Tim Ries & a few security folks. After about a ½ hr we secured our passes and made our way into the Rattlesnake for dinner. This time since I had my camera we took a few photos. The food & drink was wonderful as usual, and because it was so crowded, we stood in the hallway. That ended up being a good thing because it came over the security walkie talkie that the band is playing snooker and does not wish to be disturbed. We were right outside the snooker room! And, of course a bit later Ronnie and Keith (looking magnificent in a white shirt) strolled out of the room right past us. Later on the Meet N Greet took place and we also had Mick and Charlie stroll by us, and Mick actually looked over and said hi this time and smiled, which I found quite unusual! That was a treat, seeing all the boys again. I sent another belt backstage for Keith, its really more like a sash, it sparkles and is iridescent. He liked the silver sequined one I had sent him in Chicago and has worn it ever since, so he was bound to like this one too. Thanks Michelle! 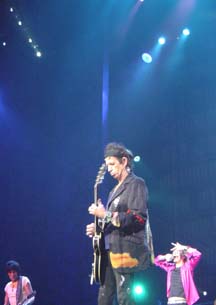 When the Rattlesnake closed, we headed down to our seats. Everyone around us in the front was really nice, which was cool. We were dead center of the row on Keiths side, this was going to be perfect. Finally the lights dimmed and my boy strode to the front of the stage as he launched into Jumping Jack Flash and Mick came bouncing out of the darkness to center stage. Its a gas, gas, gas! And Keith WAS wearing the new belt dangling from his left hip and the old one as well on the right! Awesome.

I started to wonder if we would get any surprises tonight, when IORR began as the second number. I was thrilled to hear Lets Spend the Night Together again, always a fun song and the crowd seems to love it. Keith was animated from the get-go and the band seemed to be in fine form as Oh No Not You Again began. We love to sing the line the moon is yellow, Im like jello, staring down your tits, which was good tonight because we actually had some cleavage going!

Tumbling Dice was song #5 of the evening and then a smoking Bitch with the horn section-Tim Ries smiling our way, since he knew where our seats were. He told us before you guys know EVERY word, I wish I did. I think I started taking pictures during this song, its always hard to take photos and pay attention, but I did my best. Beast of Burden was a surprise, and that song had been more special to me since it was being played on the B stage in Philly in 2002 and Keith put his guitar pick right into my hand during that number.

Midnight Rambler-what can you say? Always, always a rocking fucking great tune. I took a few photos during this one, getting a nice one of Mick on harp. The lights are dimmed during this tune, so it was harder to capture Keith and Ronnie. Lisa was smoking hot on Gimme Shelter and I got a great shot of Lisa and another great one of Lisa blowing Mick a kiss as they dueted its just a kiss away, its just a kiss away.

Band intros, then of course my favorite segment-Keiths set! Keith wore the same jacket I had photographed him in Philly this tour. In fact one of the photos I took tonight looks almost identical to a shot I took there in 2005, only difference was we were hearing This Place Is Empty instead of Slipping Away. Keith was all smiles. His daughter Theo was down front watching too. And Happy just made us happier. Even though we hate to leave before Keiths set ends, we headed out a bit early toward the B stage and secured a place on the front right corner in front of Clive and Tony. Clives head ended up being in the way for a lot of my b stage pictures, but hey, he gave me a guitar pick, since Tonys pockets were empty. 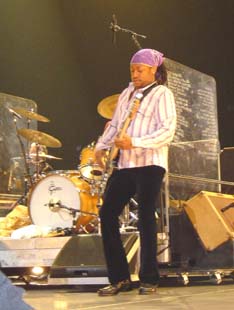 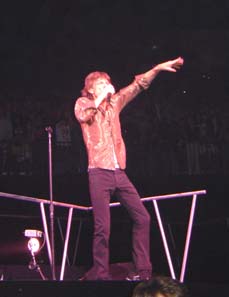 We were bouncing around to Miss You as the stage came to a halt in front of us. I tried to snap some pix, but people keep knocking into you down there. There was a bit of a miss on the start of Rough Justice, but what happened next was priceless. When Rough Justice ended, Keith started into Honky Tonk Women. We instantly knew this wasnt right and Keith was ahead of himself in the set. Keith was oblivious and Mick and Ronnie and Chuck and everyone else were not sure whether to play along, or halt the number. Finally Ronnie gave Keith the clue after Keith had started about 15 second worth of riffs that he was supposed to be playing You Got Me Rocking! It was hilarious. Keith stopped abruptly and re-started YGMR, and strolled over right in front of us, gave a sheepish grin and knocked his fist into his head like stupid me. It was great. Then when it was finally really time for HTW, Keith started it with a huge grin and the stage began to retract. 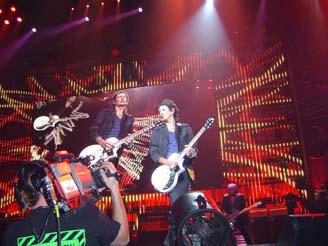 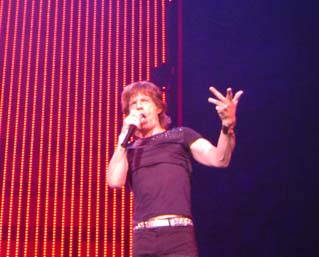 We made out way back up front and to our seats as HTW ended and Mick came out in the black furry coat for Sympathy. The lights are so red during Sympathy that its really tough to get a good shot and most of the pix I took during Sympathy of Mick were a bit blurred. I got 2 half decent ones of Mick, Lisa and Bernard singing the woo, wooos at the front of the stage together though. 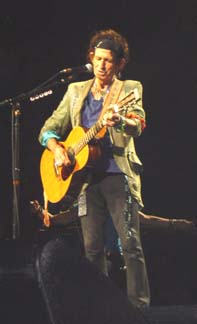 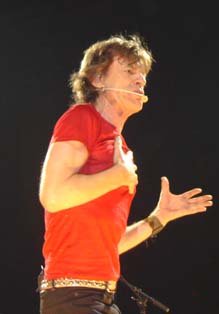 Start Me Up, we were clapping in rhythm with Bernard & Lisa. Then Keith going mad on Brown Sugar. I got some great close ups of Keith. The band leaves the stage, the crowd is smiling, chanting, ready for more. The boys reappear for their last two numbers, You Cant Always Get What You Want and Satisfaction. Oddly, I havent gotten tired of Satisfaction this tour, its got a new zip and energy to it that Ive been liking. Its time for the final bow and I get one shot off that comes out nicely, just as Keith is looking and winking in my direction. Another night at the MGM Grand comes to an end. 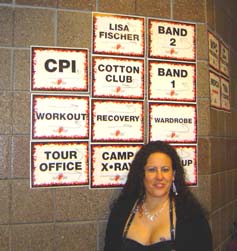 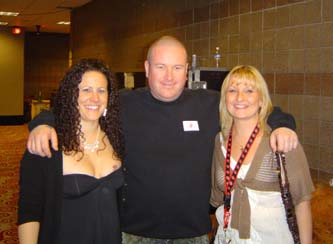 SPECIAL THANKS TO BILL FOR EVERYTHING DURING THE NORTH AMERICAN TOUR-LOVE YA! THANKS TO MY PARTNER IN CRIME "E" 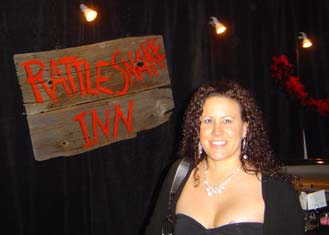 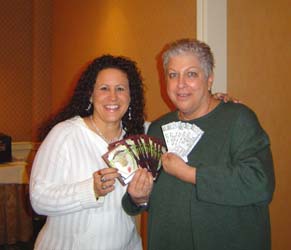 A MILLION THANKS TO MFTQ AND EVERYONE AT SLO LTD! 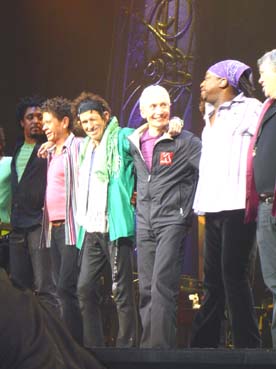 THANKS TO KEITH AND THE STONES FOR A GREAT NORTH AMERICAN BIGGER BANG TOUR 2005-2006!!!

ALL PHOTOS TAKEN IN LAS VEGAS
MGM GRAND GARDEN ARENA
COPYRIGHT BLUE LENA '06
PHOTOS MAY NOT BE COPIED WITHOUT PERMISSION!