And finally here we are at Wembley Stadium! It looks like it's going to be a beautiful evening too. We pay the hefty parking fee & obtain a pretty easy access parking space. We buy some t-shirts, the one with the European tour dates & the one with the red tongue & the UK tour dates, those big red tongues that you put on your hand & then put everything into the car so we don't have to carry it around all night. We take a few photos of the Twin Towers of Wembley, knowing that the stadium is to be torn down soon. 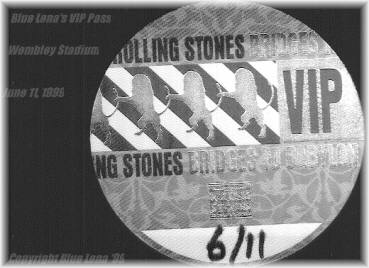 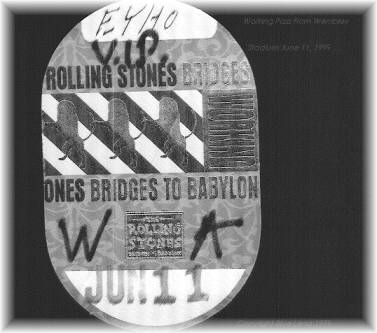 Once inside the stadium, we realized we had lingered a bit too long waiting for the boys, because as we made it down the steps to the pitch, the show was ready to begin. We raced to the front, but not wanting to tangle with the crowds to get into the golden circle once the show began, Graham yelled he was going to our seats. Graham that was plan "C", not plan "B", we turned around to follow him & within seconds lost him in the crowd. E & I turned around, and during JJF, we squeezed our way through the pitch "pardon me, excuse me, coming through" & finally made it to our destined spot. Mick sort of apologized for missing London last year. Again we got Ruby Tuesday, which I didn't mind at all, we had been rudely treated in Texas last year & had to miss this number, so hearing it at 2 shows in a row made up for it! The whole crowd seemed to sing along too. Here we were in Wembley Stadium seeing the Rolling Stones-wow, wow, wow. I could hardly believe it, for I never thought I would get to see them here on their home turf. It was special for me, for all of us who traveled abroad for this event. I think my only disappointment was that the crowd did so poorly on Saint Of Me, people seemed to be unfamiliar with the newer songs. Plus, tonight I think the band was a bit tense because so many family & friends were in attendance. 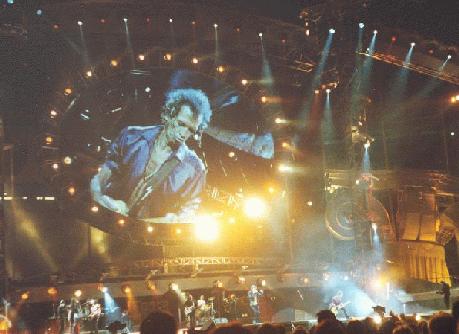 Keith hit some very bad notes at the start of Gimme Shelter, but it rocked all the same once it got going. Sheryl did her guest bit on HTW again. People remarked later that Keith & Ronnie had had a bit too much to drink before hitting the stage tonight...nah, not Keith & Ronnie! LOL Anyway, Keith was really sweet because he was at a loss for words once he got up to do his set. He remarked on how good it was to be home, but then remarked that he didn't know what else to say or do! Aw Keith! Finally Pierre brought his stool & guitar & we knew we would get another rendition of "You Got The Silver". Oh what an amazing number that is, the slide work is great, Ronnie & Keith and Blondie on acoustic as well. During the introductions tonight, everyone went mad for each Stone & even Charlie came out from behind his drum kit to take a bow-first time I ever saw that happen! The B stage was a treat as always, Rt. 66 & Rambler being favoured over LARS. The show ended as they all did, but I still love hearing the opening riff to Tumbling Dice, the "Woo Woos" of Sympathy & the "yeah yeah yeah woooos!" of Brown Sugar. Fireworks, glitter, a lovely final bow, the Stones have come home baby!! 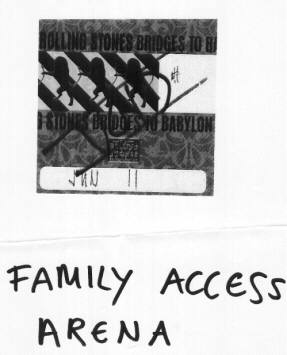 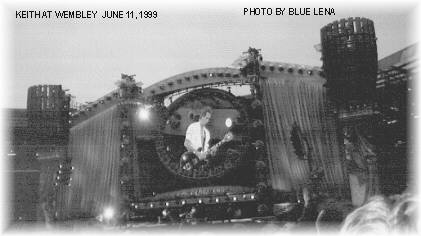 We lingered a while after the show & saw Jaime from Australia, but not Graham. We were starving as we left the stadium & thank God in the UK they have the sense to keep the vendors open after a show. In the States they close up after a show, just when you are the hungriest & your lips are parched from dancing & singing. We grabbed an Orange Fanta (without Stoli) & a few cheeseburgers & waited by the gates for Graham. When he didn't come we finally headed to the car & found him waiting there for us. We reviewed the nights events, decided that Sheffield was a better show than tonight's,but we would be back tomorrow night to cap it off for the Stones last show at Wembley Stadium & our last show before heading back home to the USA. 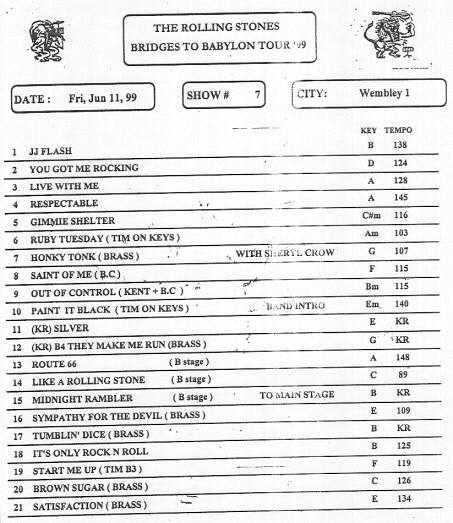 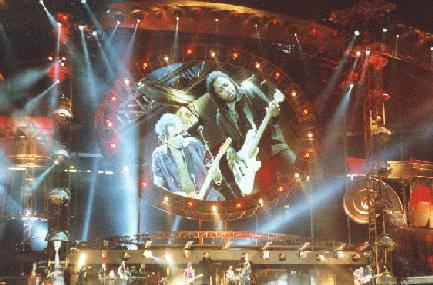 PHOTO OF KEITH & DARRYL BY FRANCIS JACQUES 6-11-99
CHECK OUT MY OTHER ADVENTURES WITH THE STONES IN THE UK! 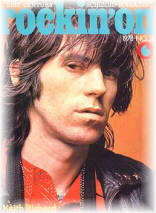