Kylen Miles' Art of "Watership Down" 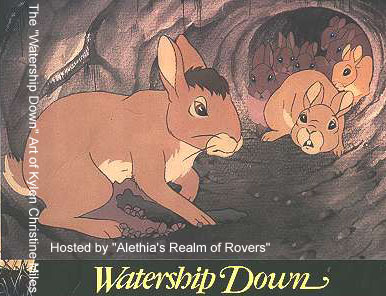 Last Updated January 27th, 2000
Is it a kind of dream? No..it's real life. At least, for me- and at least, an influence on it. The song "Bright Eyes" ( the midi you are listening to ) was a lullaby my father used to sing to me for years- originally performed by Art Garfunkel and later redone by my wonderful Moody Blues.
It is from this film- one that I grew up with and still cherish to this day. It is full of violence and drama- not children's fodder. Most people say, "Get real! How can you make a dramatic, violent film about bunny rabbits?"
Anyone who has ever had rabbits will know that they are extremely violent. I watched a female rabbit rip the throat out of her mate, once. And a few weeks later, this same female rabbit was killed by her own daughter.
What I am saying is this film has real heart and beauty deep within it, and will never burn pale.

Hazel
Hazel is the lead character in the film and book, and is level-headed and quick of mind. His own development is shown throughout the story, as he goes from a bright yet immature fellow, to a wise, respected leader.

Thlayli ( "fur head" ), Bigwig
Thlayli, which is Lapine for "fur head" is playfully referred to as Bigwig, and is my absolute favorite character. He tends to be bitter and a small bit of a bully, but is genuinely courageous, good, and spirited.

Thlayli ( "fur head" ), Bigwig
Bigwig again, courageously defending the runs of the warren from General Woundwort. This is one of the gorier scenes from the film.

Captain Holly
The captain of the Sandleford Owsla, Holly starts out as a nemesis for Hazel's band of rabbits, but ends up one of their companions when Fiver's predictions prove right.

Blackberry
Blackberry is the most intelligent of Hazel's rabbits. It is he who figures out how to cross the Enborne, and ultimately escape Efrafa.

Hyzenthlay ( "shine dew fur" )
The swollen-eyed Efrafan femme, who's name means "Fur shining like dew" in Lapine. She helped Captain Holly escape Efrafan clutches, and Bigwig puts his trust in her to help bring does out of Efrafa. Her color scheme is complicated to capture just right in Photoshop- and uploaded to the Internet, it looks much too dark.

Hrairoo ( "Little Thousand" ), Fiver
Fiver, who was named for being the 5th in his litter ( rabbits can only count up to 4 ). Fiver is the one who saw all the danger coming, and is responsible for the protected lives of Hazel's rabbits.

Blackavar
Although a surviver in the novel, Blackavar's interest in revenge on General Woundwort results in his violent death in the movie. I have always really liked Blackavar, and he is one of my favorites, right up there with Bigwig and Captain Vervain.

Blue Flyer ( char by me )
This is my personal, fan-made character. Her name is The Blue Flyer, and she is a very timid, shy young doe who is made nervous by large groups. Although he would seem incredibly intimidating, Bigwig is her favorite company.

Nashayla( char copyright to her player )
This a very cute doe who is still practically a kitten that is very sweet looking. I did this image by request by another member of the awesome-o Posy-Rah's warren.

Posy-Rah( char copyright to Simone )
This is my chief rabbit, the strong, courageous, white and grey doe, Posy-Rah. I did this the other night out of boredom, and thought she turned out kind of pretty :)

Twilight( char copyright to Jaden )
Yes, I know, I spelled her name wrong in the picture and I am really embarassed about it. I would go back and change it, but it would take a lot of time to properly alter the image back to the actual spelling. Oh well- sorry again Jaden! I hope you like it despite my stupid mistake!

Gelphirenea ( char copyright to Ally )
Since Posy-Rah is gone for awhile, Gelphi has been taking care of the warren and watching over all of us. Here is a little gift for her that she asked for :) I hope you like it :)

Magnolia ( char copyright to Emily )
I was bored one day and was messing around with the tools in Photoshop 5. I made a little grassy scene and then later scanned in a drawing of the friendly doe from Posy-Rah's warren, Magnolia, and I think it turned out cute :)

Back to Alethia's Alternative Art Gallery!

visitors for this gallery. Wow"