REYNOLS started its activities in 1993 in Argentina. Since that date the work of the band has been basically oriented to improvisation,droning and deep experimental research, etc.,employing diverse acoustic & electric instruments, tapes and electronics.The group is lead by Miguel Tomasín, an amazing musician who suffers from Down´s Syndrome.The fact that Reynols integrates a handicapped member is not casual, actually the band´s forrays into musical experimentation are guided by the inmense freedom of Tomasín´s mind, giving a challenging and unique character to this project.The line-up is completed with musicians Robeto Conlazo & Anla Courtis.In 1995 Reynols released the first dematerialized CD called "Gordura Vegetal Hidrogenada". In 1996 they started releasing stuff outside their country. At the moment the band has more than 50 releases in Europe, USA and Japan.During the years the band´s activities has included: concerts for plants, tributes to dry ice, psychic energy refractions with toothbrushes, noise performances in public squares, etc. the band also has manofacturated selfdesigned electric guitars and other electric instruments.During 1999 Reynols has been involved in several collaborations projects with the acclaimed american composer Pauline Oliveros. The band remixed Oliveros´s live stuff in a CD called "Pauline Oliveros in the Arms of Reynols" and played an internet concert with her in 1999. In august 2000 Oliveros & Reynols played together some concerts in USA including a performance at Lincoln Center on her "Lunar Opera" that was the begining of the REYNOLS USA TOUR 2000.
Recent Reynols releases are the "10.000 Chickens Symphony" on Drone Records (Germany), a CD made only with processed "Blank Tapes" released by Bernhard Günter´s label Trente Oiseaux (Germany),"Barbatrulos" and "Minecxio" LP & 7" released by Freedom From (USA), "_ _ _ _ _ _ _" recently appeared on Betley
Welcome Careful Drivers (UK) and Black Bean & Placenta (USA)and the European re-release of "Pauline Oliveros in the Arms of Reynols" on Cream Gardens (Netherlands).
Articles and interviews on the band can be found on:
The Wire (UK),Bananafish (USA), Muckraker (USA), The Sound Projector (UK),Musicworks (Canada), The Chicago Reader (USA), Nashville Scene (USA), Columbus Alive (USA), Houston´s Other, Speeder (UK), etc.
At this moment Reynols is working in many projects including: a record made with processed carbon and air amplification project and the composition of a piece for the Deep Listening Band.

Note: This compilation of material was donated to this site by the band. 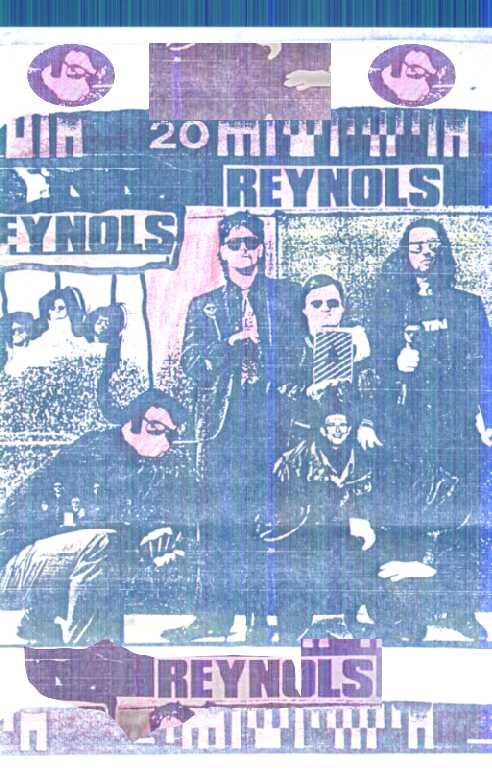