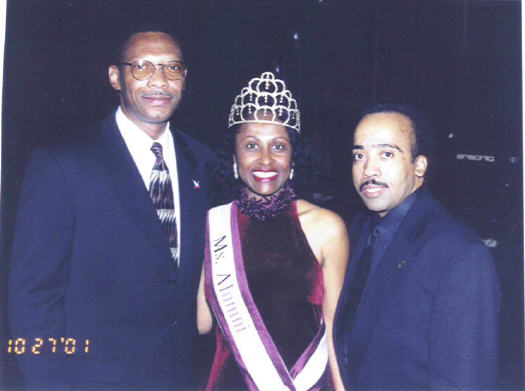 DURHAM, N.C.-- The title of Mr. and Ms. Alumni at North Carolina Central University has little to do with popularity, but more to do with giving back.

Mr. Alumni is Calvin Kearney, a 1971 graduate and current director of operations for the Department of Health Medical Assistance Administration in Washington, D.C. He said he was more than happy to run for Mr. Alumni on behalf of the NCCU Washington, D.C. Alumni Chapter because he loves to give back to his alma mater.

“I can’t sit down and write a check for $50,000 but I can do little things here and there that may equate that in the long run,” he said.

Kearney helped his chapter raise $10,027 for NCCU scholarships in only two months by soliciting contributions from alumni and friends and selling raffle tickets. This is the second time that Kearney has run and won the title of Mr. Alumni. He says this win, however, meant the most to him since it happened during his 30 th Class Reunion Celebration.

“All of my old friends and classmates were there,” he said. “Homecoming was extremely exciting for me this year.”

Kearney doesn’t know if he’ll run for Mr. Alumni next year, but he will always continue to support and raise dollars for NCCU.

“I think where I am in life is a result of what I gained at NCCU,” said Kearney. “So anything I can do to give back, I’ll do.”

“Everyone can’t give money but you can give up your time and effort to the university,” she said.

Petway, a 1977 business administration graduate, is a customer relations manager with First Union. She is a member of the Durham Alumni Chapter of NCCU and a life member of the National Alumni Association.

Petway was motivated to run for Ms. Alumni after watching her chapter lose by approximately $200 last year. She said everyone was shocked at how close the competition had been and she promised herself right then that they wouldn’t lose again.

Petway, a native of Rocky Mount, N.C., received a lot of support from the Durham alumni chapter as well as the Tidewater alumni chapter located in the Butner, Oxford and Henderson, N.C. areas. Also, she was able to raise $2,100 from companies who would donate matching funds. Her grand total was $22,921, which is the largest amount on record raised by any chapter.

Petway is not finished yet, however. Her next goal is to bring more responsibility to the crown in an effort to create more interest around the position than the thrill of being crowned during homecoming week.

Petway said she is still collecting money from latecomers who promised to support her. Even though the contest is over, she doesn’t mind.

“I told them it’s never too late to contribute to North Carolina Central University, so please send your contributions!”