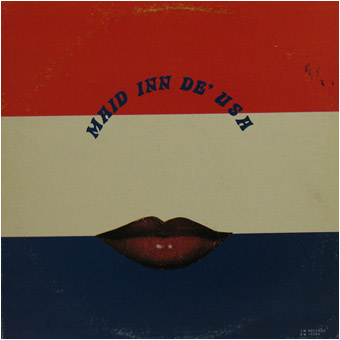 Here's what seems to be a previously undocumented addition to the Album World tax scam discography. The 'band', if we pretend that it existed, delivers what sounds like studio backing tracks for various known and unknown songs before the vocals were added. In other words, it's instrumental music that was never intended to be released in this form. Not uncommon for the wild world of tax shelter rock, and as you might guess, a rather unusual listening experience. Assuming that it all comes from the same source, I would venture that it was a club band cutting some studio sides, as the playing is reasonably good and the track list contains several 'oldies'. Off the top of my head I identified instro covers of "Liar Liar" (Castaways), "La La La La La" (Blendells) and "When You Walk In The Room" (Searchers). People with better ears than me can properly name several more, although the completely invented back cover credits do not offer much help. Since the music was intended to support a vocalist, there is not much of soloing and the verses and choruses float by in an amusingly passive way. It is strangely listenable, and fairly varied style-wise, so why not? [PL]