Here's a real review of a placeholder in the AA book, after I finally located a copy; both this and its predecessor are rarely seen.

The second of two albums that the hippie-rockers Lite Storm recorded under the aegis of their Hindu guru Satya Sai Baba, who appears on the cover and is heard throughout the record. The old Acid Archives review suggests that this sequel is similar to the preceding God Is Love, and while they have much in common, there seems to be a certain development in process. The unusual mix of embryonic new age (eerie electronics), liturgic Eastern chanting, and trippy CA folkrock is recognizable, but here given a further spin as Sai Baba picks up the mic and sings a few songs himself--not just the kirtan chanting, but real pop songs. One of them sounds more Bollywood than CA guru music, but the bulk of it is typical '70s hippie-folk with a light rock setting, atmospheric keyboards & wordless vocals, and Sai Baba and the Lite Stormers (male and female) sharing lead vocals, often by trading lines. It's kind of catchy, and fun to hear traces of old '60s sunshine lyte-psych mutated into this unorthodox spiritual music. Whatever Sai Baba's game was, he clearly had no objection to the disciples' Western musical activity. Compared to God Is Love I think this is a more consistent and finalized album that plays through like a charm, but the kirtan curveball gives the psychedelic/new age aspects of the music an ethnic pop sheen which needs to be weighed in. Well-written songs and arrangements with some spooky psych passages and nice female vocals, and as a crossover item it finds its inbetween-ground in a fairly unique spot. [PL]. 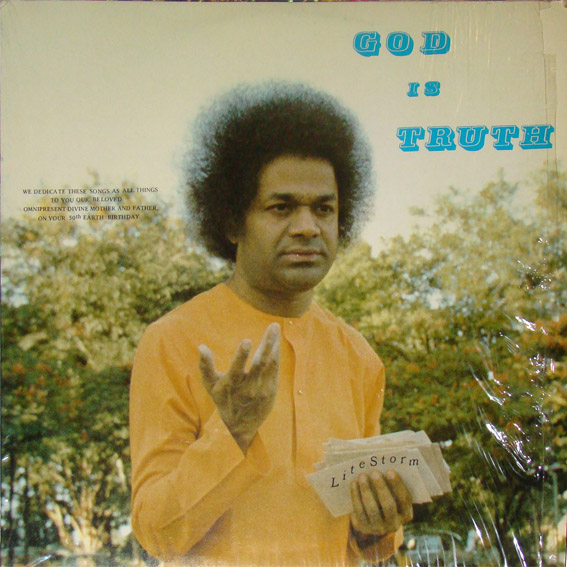