Welcome Youth Table Tennis players  to 'your page' - TT is a great Lifetime sport !
LINKS NEWS AND INFO HERE
of special interest to Connecticut Youth and their friends:
SEE MORE LINKS AND ARTICLES BELOW 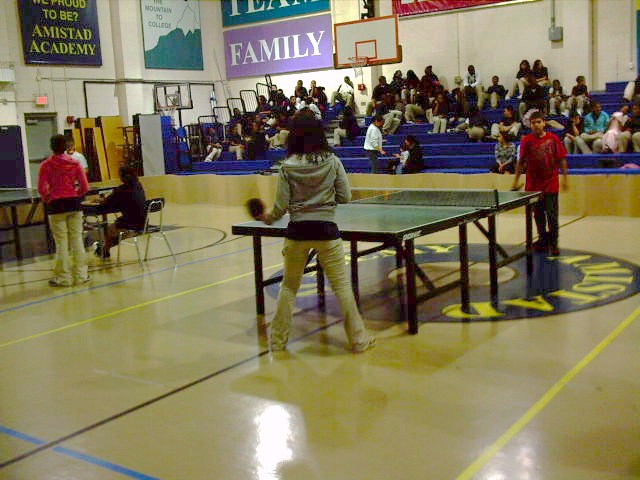 Amistad Academy  hosted the event, a team competition with  nearby Conte West Hills School.  The Amistad program, an after school activity option at the Charter school, is conducted by Peter Noble's Fairhaven Athletics organization.  Peter was initially trained by CT TTA director Dave Strang.  Strang was the program's  original coach between 1994 and 2000, before Peter, and continues to conduct annual coaching clinics at the school.

Conte West Hills school's TT program is newer, conducted by Kacey Rosenfeld, a Physical Education teacher at the New Haven public school located not far from Amistad. Kacey has also been a student of CT TTA Coach/Director Dave Strang at the Middletown TT Club since finding the club a few years ago.

Guests, Conte West Hills took most of the singles matches to gain an insurmountable lead, before Amistad won a number of doubles matches, finishing with a 10 to 4 match victory for Conte West.

8 Players, a mixture of boys and girls, represented each school, competing on 3 tables in the Amistad Gymnasium in the afternoon, afterschool event.

As the conclusion of the Spring TT season for both schools, the coaches, and a number of the players, expressed enthusiasm over the well attended and conducted event, and mentioned how plans for a rematch next year will motivate the students to more serious preparation during next year's club practices.

Coach Kacey watches and videotapes and  Coach Peter hits with one of the kids. 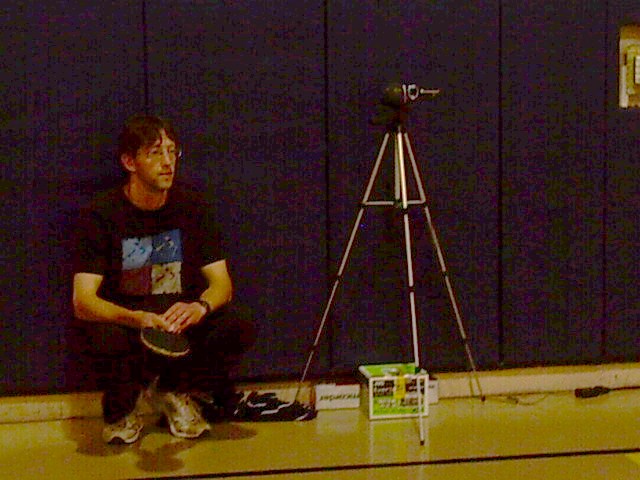 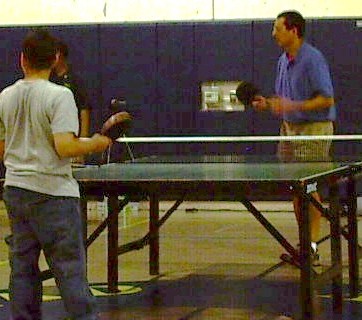 Dave and Mark played exhibition matches and audience challengers followed by coaching at 3 tables, one using a Newgy Robot.  The 4 hour program ended with doubles matches involving various combinations of the kids and the 4 instructors.

-----------
Connecticut Junior scores in another NYC tournament
photos by S.Katz

State Junior champ David Katz, moved up the USATT  ratings
ladder again with a win in the 25 player U-1650 event at the NY TT Federation's September tournament in Chinatown.

13 year old David got his start and initial coaching a couple years ago at Fairfield TTC and often plays there on Saturdays, and also at home and the Stamford JCC with his father Sheldon,

He won 8 out of 9 matches and expects his 1456 rating to go over 1600, moving him up a few notches from his current #20 spot on the CT.TTA Fairfield/Middletown rankings (all ages) on our ratings page.

The Youth Sports after school program includes a table tennis club as well as volleyball and a
variety of other sports and activities. The table tennis program is a continuation of the local
after school program originally started by Peter and Dave over 10 years ago, recognized in
earlier years by articles in the Yale Newspaper and Connecticut Spanish language newspapers
and by a US Olympic Committee and USATT funded Grass roots development grant.
(See link to article at bottom of page)

Dave and Mark played an exhibition match followed by challenge matches with selected teachers
and students during the first hour, and stayed two more hours to work with kids, play doubles matches
and allow kids to play against the Newgy robot on one of three tables provided by Peter's organization.

In addition to past and ongoing TT programs at schools like Texas Wesleyan University, Anderson College (SC) and Augusta College (GA), a new scholarship has been added for juniors attending the school of their choice, funded by a new $100.000 endowment. More information on the Wasserman memorial scholarships is available at:  http://www.usatt.org/news1/wasserman.pdf

click on the photo above to start video play
Short Video - CT Juniors show the adults what it's about !

Katz w/ trophies from USATT event
David Katz of Stamford, took singles and doubles 'gold' recently in the 2006 AAU Junior Olympics Greater New York City table tennis championships . David  took  singles and doubles titles, both in the under 14 boys age category.
And at another recent area tournament he won 13 of his 16 matches, and events including U-1600 singles, competing mostly with adults rated above him , boosting his USATT rating from 0778 to 1442 .
'Dad' & practice partner Sheldon had good results too, reaching 0932 from a previous 659 rating.
David won his first junior titles at the 2005 CT. Championships last spring.
He and father Sheldon took up TT 'seriously' the previous winter with practice and lessons at the Fairfield TTC with club director and coach Dave Strang. They practice regularly with each other at home and as often as they can in FF, usually  on Saturday afternoons..

This week, ESPN.com is featuring a few of the best non-NCAA-sanctioned programs in the country.

When coaches take a new job, they often speak of changing a "losing culture." This process generally involves taking a historically inept program and turning it into a winner. The challenge facing Jasna Reed and Keith Evans, however, is far more formidable. 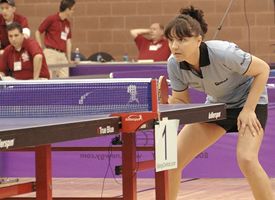 Jasna Reed helped Texas Wesleyan table tennis as both a player and a coach.

The co-coaches of the table tennis team at Texas Wesleyan University, in Fort Worth, are attempting to change the predominant perceptions of a pigskin-crazy populace. That battle begins with revising the moniker most commonly associated with the sport.

"What they refer to as pingpong in the U.S is what people play in their basements," says Reed, a player-coach for the Rams who is from Croatia. "Those people play in their basements for fun. They play with nonprofessional rackets, so it is more like just a game. Table tennis refers to the real sport, an Olympic sport that is very competitive. It is very popular in the [rest of the] world, but not in the U.S."

To Texans, collegiate titles are a birthright. After all, the state is home to the Texas Longhorns -- winners of 47 NCAA championship banners. Still, the dominance the Rams have displayed on the 9-foot by 5-foot table on which small-scale tennis is played is almost unparalleled.

"To be able to keep going back and [winning titles], it's an incredible run," says Texas Wesleyan athletic director Kevin Millikan. "Every year, people are gunning for them. The expectations for them are so high and there is a lot of pressure on them. If they don't win, it's a disappointment."

When Texas Wesleyan's administration decided to start a table tennis team in 2001, it didn't envision creating a juggernaut that would serve its way to sports superiority. The idea, in fact, was met with a fair share of skepticism. FULL STORY AT:
http://sports.espn.go.com/ncaa/news/story?id=2930890

Except for contents, trademarks etc. owned by & designated from other sources, all design, logos, text and photos here and elsewhere are copyright Dave Strang DBA: RealTableTennis.com, CT.TTA, MT TT, FF TT AKRON TTC etc. c. 1992-2006. Permission must be requested and granted via e-mail for it's use unless covered by fair use provisions of the law where attribution and a link back to this site are required.
.