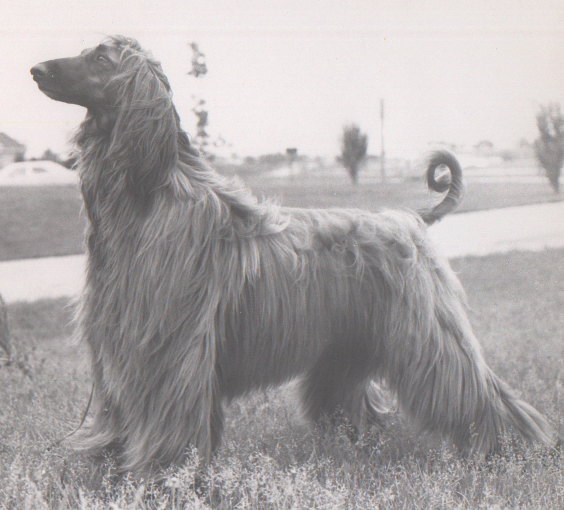 "Duke" 1969  What a dog to start with.  A pair of novices winning like this definitely hooked us on the sport.  A red brindle, Duke finished with 5 majors and a Hound Group when people were asking what color he was. After nearly thirty years of showing, Duke still has a "special" place in our hearts. 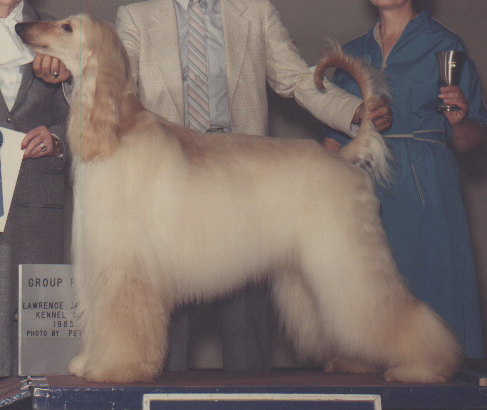 "Hawk" 1980 A multi-breed winner from the puppy class, Hawk had 10 points and both majors at ten months of age. A more elegant showman would be difficult to find. 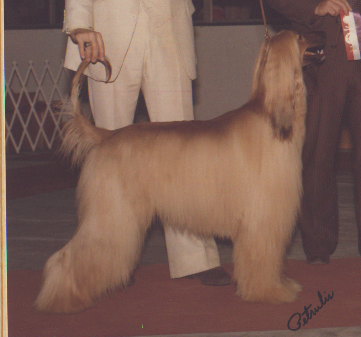 "Shawn" 1974 After recovering from a severe knee operation as a puppy, he became one powerful animal. I could write a book on this one. One of the smartest Afs we have had with more pride than we could handle; an alpha dog for sure. I'd better stop here; he still means a lot to me. 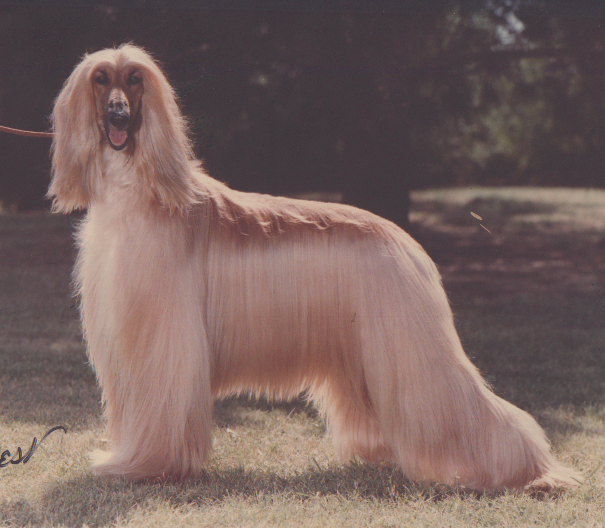 "Andrea" 1978 A gorgeous bitch that was so excited to show, it might take a show or two to calm her down to an acceptable rate.  She was one of the first in the country to catch the new disease Parvo-virus. She was only a puppy, but still beat it.  Lost all of her coat-then really put it on. 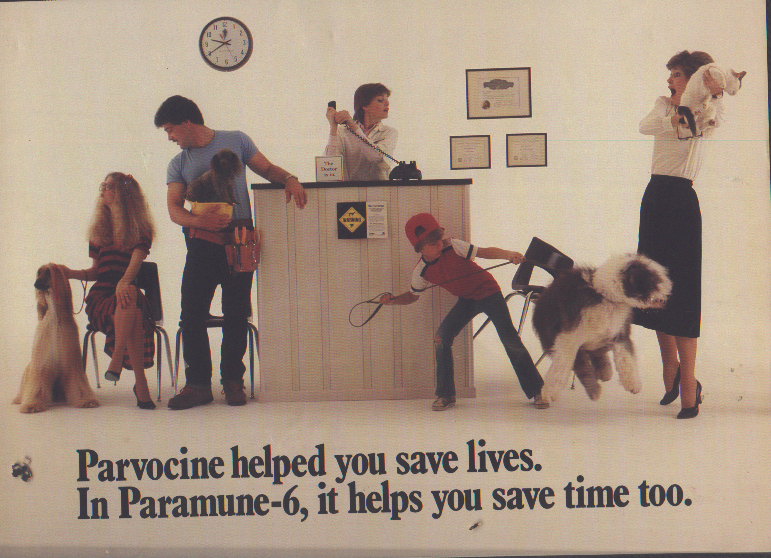 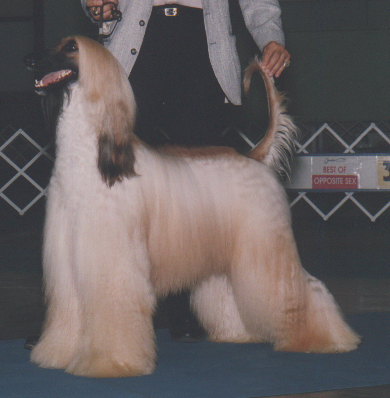 "Turbo" 1990 After much arm twisting and pleading, Barbara & Kevin Cassidy allowed Turbo to move to our address. We jokingly refer to him as "Baby Huey"- so powerful and doesn't know to restrain it when playing.  He is still with us. 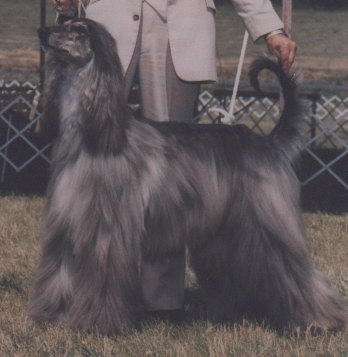 "Storm" 1987 A Group I winning Hawk son who came out of his birth sack in a show stack.  Showed promise early with a Group II from the puppy class.  Crossed the Rainbow Bridge at 14-1/2 years of age. Storm ruled the roost with a gentle paw, and served as mentor and role model for the youngsters. He was a most pleasant dog to be around. 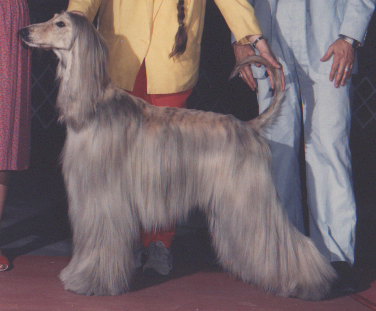 "Diamond" 1982 Co-owned with Joyce & Nick Krachmalnick who showed him to his championship. He finished with Winners Dog at the  National Specialty in Chicago, and two Specialty wins. 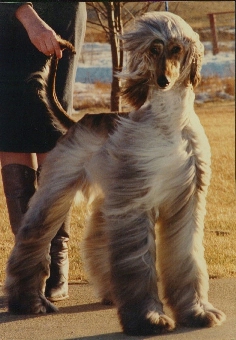 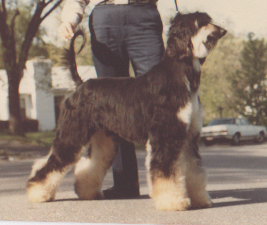 "Chocolate" 1982  One of Hawks champion kids, she was our first black & silver champion. A sweetheart that died at an early age because of a vet screw up, about killed us too. 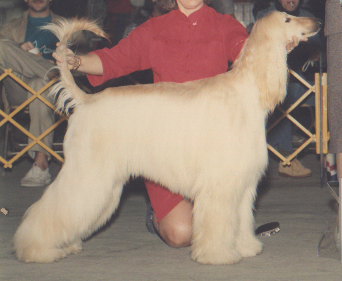 "Crystal" 1983 A Hawk look-alike daughter.  Beautiful and sweet companion, but too much of a princess to special. 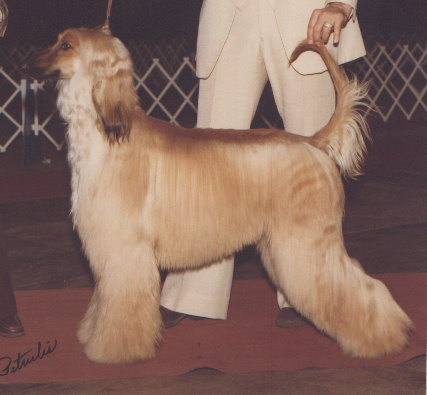 "Andy" 1978 Originally owned by friend Belle Burr, we fell in love with him as a puppy and were given the privilege to purchase him at about eight months of age.  Really built. 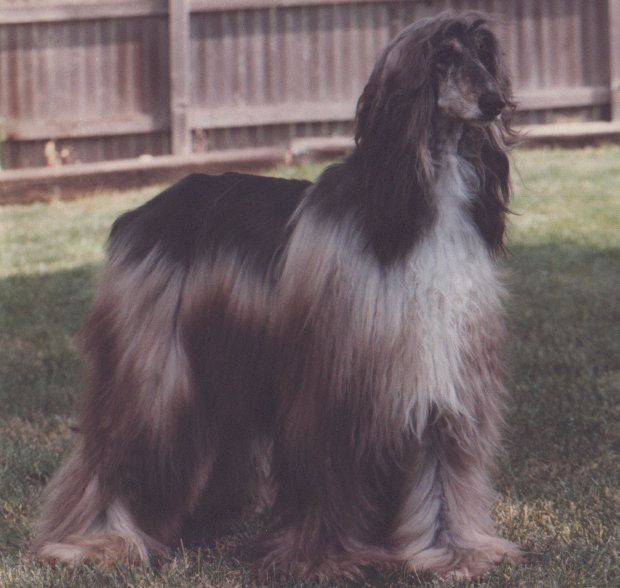 "Nikki" 1988 Needing only a major for her championship, Nikki's life came to an early, unexpected end due to another vet screw up.  She loved life with people, but made it hell for other bitches. Quite an escape artist which made life with her exciting and frustrating. She still had our love. We just shot off giant fireworks in her memory.