The "Prophet of the New Age" and His Cult
WHY FiGU, THE CLUB SURROUNDING MEIER DEFINITLY IS A CULT 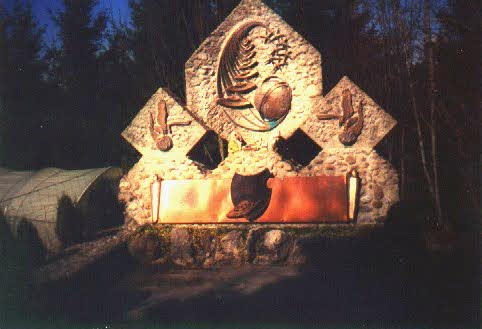 ABOVE: A picture of the "Pleiadian Altar" on the FiGU (Meier)-compound in Schmidtrueti, Switserland.
A lot of people, unfortunately even some UFO Researchers, are of the opinion that FiGU is merely a club of harmless UFO-believers and Meier nothing but a poor Swiss farmer with UFO-contacts. Especially in America there are still a lot of people believing in the Meier-case, simply because they have poor knowledge of what really goes on behind the ports of the Semjase Silver Star Centre, the headquaters of FiGU.

But a second look on the claims of FiGU and Meier tells us this is no harmeless club, but a cult, built around just one man: Eduard "Billy" Meier. This becomes quite obvious by reading the little Meier-biography on his official homepage. "At the age of twenty-seven he completed the teachings of the Pleiadians, that prepared him for his future function as an advisor, teacher and prophet."

Next to that his followers accept him to be "The Prophet of the New Age" a title Meier claims was given to him by the Pleiadians. When he was given the chance to 'travel back in time' Meier claims he met Jesus Christ and recieved teachings from him. He also assures his followers he is "only human on earth contacted by these beings" and that they've chosen him to be the new prophet and shared their knowledge with him,"Billy" Meier only.

If that still doesn't convince you we're dealing with a cult here you should read about Meiers randerings about overpopulation. One of the biggest problems in the modern world, according to Meier. This goes, like in every typical cult, only for the cult-members. Prophet "Billy" ofcourse can have as many kids as he wants. Anyone that has done research on the Meier-case in the past and came to a different conclusions as Meier and his cult gets threatening phone-calls, gets publicly slandered on the internet in an absolute childish, but rude way. Pretty sectarian to us here at A.U.R.A.

Two other things we noticed by researching Meier and his cult are the following: Cult-members are not allowed to speak about the contents of the Meier- writings, there not allowed to copy them nor pass them on...imagine they would fall into the hands of a critical reader. Ofcourse any one can ORDER (and so, pay for!) the Meier-writings. The other disturbing fact is that every cult-member has to 'donate' 10% of his/her monthly salary to FiGU (...and "Billy" in the end...) This cult in our eyes therefore belongs on the list of other dangerous cults like the Raelian movement, Heaven's Gate, Uranians etc...

Funny is also that Meier announces on his official homepage that FiGU is not about UFOs in general or Ufology as it's commonly known, but about spiritual teeachings, and other esoteric blather. So there he actually ADMITS that UFOs are merely a way to get his message and his teachings across.