Rumble on The Rappahannock 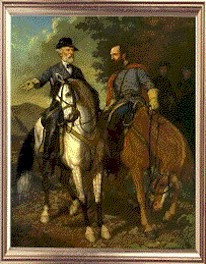 Welcome to the Battle of Chancellorsville Homepage. If you are a serious student of The Civil War, then you've come to the right place. I offer a detailed account of the battle regarded by many historians as "Lee's Greatest Victory." You will find a full-length summary of Chancellorsville, plus a brief analysis of it's strategic impact on the war.

This battle was unlike any other during the war. This was in part due to the maneuvering through what seemed to be landscape inpregnable to maneuver. The mind and methods of Napoleon Bonaparte also played a pivotal role. Without the lessons of "central position" it is unlikely that Lee would have chosen to stay and fight. "Fightin'" Joe Hooker's movement up the Rappahannock River was taken right out of the Corsican's playbook as well.

It was fought from May 1-5, 1863, and when it was all over, more than 30,000 Americans were either killed, captured, or wounded at Chancellorsville. But the loss of one man was irreplaceable to the Confederacy; Thomas "Stonewall" Jackson. His tragic death marked the beginning of the end for the elite level of commanders in Lee's Army of Northern Virginia.

Without Marse Robert's stunning victory, Gettysburg never would have happened. His defeat of Joe Hooker was a stepping-stone for the invasion of Pennsylvania in late June of 1863.

So sit back and enjoy and watch a great piece of American History come to life before your very eyes.

Yo, this crib has been visited