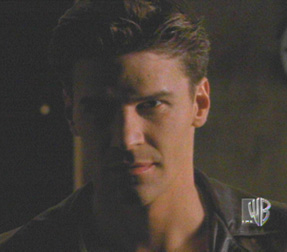 He was born Angelus, in Ireland in about 1757, 240 years ago. Darla bit him and they raided Europe for several more generations. They were together in Pudapest for the turn of the nineteenth century earthquake that devestated the city, and the last time they saw one another was Camonis.

Then in about 1910, he fead on a teenaged Gypsy girl who was a favorite of her clan. As the perfect punishment for a vampire, the Rumony Elders congured a spell to restore Angel's soul. He then felt the weight of his past actions and moved away from his familar world of darkness to begin again in a new place.

He moved to California, turned away from other vampires and has never hunted here. He swore never feed on a living human being ever. Although temped to bite Buffys mother he kept his world.

He began to hate other vampires and what they stood for so to help he decided to team up with the Vampire Slayers to hunt and destroy the rest of his kind. And judging from his morals, I believe if they ever did wipe out the other vampires he would have revealed his true nature to the Slayer to finish the job. What do you think, E-mail me with opinions.

Buffy was born in LA, California in 1981. Her parents separted, she lived with her mother. She was into Cheerleading, Dance Committees, and was one of the "popular girls" in school. She started having strange dreams where she was someone else and found out later that they were all real things she had done in past lives and the Slayer. Her first Watcher found and trained as this generation's Slayer.

When she was ready she faced the vampires won and avenged her mentors death. Unfortunately she had cause so much trouble, burning down the gymnasium, getting in fights and skipping school, she was kicked out. Her mother then moved them to Sunnydale to start again in a new school.

However, just after arriving in Sunnydale, her first day in fact, she learned there were vampires on campus and it was the same deal all over again. This time her new Watcher, Rupert Giles, was prepared for her and had everything she needed ready. She made friends with Willow and Xander right away and they learned who Buffy really was when, Xander overheard her and Giles talking, and she saved Willow from Darla.

Angel found Buffy and gave her the silver cross she always wears when hunting, and has been warning her about up coming events ever since. When Buffy finally learned that Angel was vampire, she could bring herself to kill him because he had helper and been kind to her for so long. Darla bite Buffy's mother to turn them against each other but Buffy believer Angel when he explained his past to her and he killed his creator to save Buffy because he loved her.

History has been researched