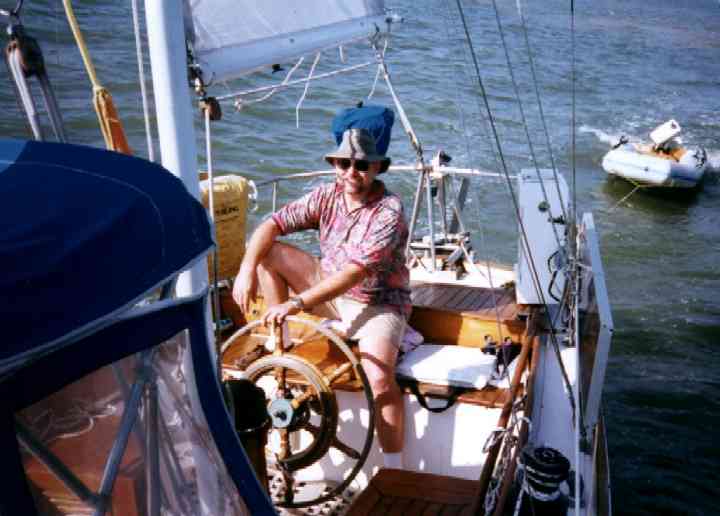 My name is Bill Ashenhart. I'm 45, married to Sue for 10 years and currently live and work in Houston Texas. I have a daughter, Jennifer, who is heading off to the University of North Texas in Denton Texas this year.

I am a Mechanical Engineer with a degree from the University of Texas at Arlington and currently work for S&B Engineers & Constructors, LTD in Houston Texas. My specialty is Heat Transfer Equipment for the Refinery and Petrochemical industry. Specifically I design heat exchangers, fired heaters, steam boilers and other related heat transfer equipment.

I have had an interest in sailing since somewhere around the age of 9 or 10. I sailed with friends and then back in 1978 I purchased a 1971 model Venture 21 (before they were known as McGregor) and sailed it on the Dallas Texas area lakes. The Venture 21, in my opinion, was a good boat to learn sailing in. It has a relatively light weight, it has a slight weather helm which keeps a novice out of trouble and it is easy to maneuver.

In the spring of 1988, the Engineering company I was working for in Dallas decided to close that office. The day after I was I was laid off in Dallas, Sue and I were married. How's that for timing? We ended up moving to Houston a few months later after I received a job offer here from M.W. Kellogg, a large Engineering and Construction company.

Sue was not particularly fond of my Venture 21 ( it was just too small) so I ended up selling it. Besides, by that time I had an even better deal - friends with boats - which means all of the fun and none of the expense. Of course, it is still nice to own your boat. That way you don't have to worry about running it aground or banging into the docks with someone else's baby.

I looked off and on at the used boats on the Brokers docks but nothing serious. Then in December of 1996, a friend pointed out the Fuji 35 to me. I looked at it but it was more than I felt I could afford. I also figured that I wouldn't be able to get the Chief Financial Officer (wife) to approve. I agonized over it for several months but still I kept coming back to the fact it was just priced higher than what I wanted to spend. A key selling point of the FUJI is its headroom. I'm 6'2" and had been looking for a boat with sufficient headroom where I could stand upright in the cabin and be comfortable. I just did not want to tilt my head. There are not a lot of sailboats out there that meet these criteria.

I kept noticing that the FUJI wasn't sold. When I talked to the broker, she told me that an offer had been made and accepted but then the deal fell through during the survey. There were a couple of soft spots in the deck where water had infiltrated and caused a 12" square area of the plywood backing under the fiberglass to start delaminating. This scared off a lot of people who were worried that there might be extensive rotted wood.

After talking it over with my wife, I finally made what I thought was a stupid, ultra low-ball offer that the owner should reject out of hand. Actually, Sue was just tired of hearing me talk about it and gave in to my sad puppy dog looks. But, I felt that I should at least make an offer for this boat so I could tell myself I tried and I could stop thinking about it. (I know that my wife was hoping the owner would reject it!) I'll be darned if the owner didn't end up coming back and what with counter offers and all, I ended up owning a boat for barely over my original offer. Apparently, the owner had delayed and rejected some other higher offers because he just KNEW that the boat was worth more. When I made my offer, he was at a point where he was broke and he was just ready to get however much he could before he lost a home he was buying. I feel sorry for him but then I did not force him to reject other deals or even to sell to me.