Elizabeth & I flew Air Canada, leaving June 2. She flew from California and I flew from Pennsylvania and we met in Toronto. From there we boarded the same flight to London's Heathrow. It was a long days journey, and we lost a day in flight, arriving 10:30am June 3. Graham met us at the airport & we had a nice reunion, having met for the first time at the MSG shows in NYC January 98. He drove us the hour & a half to his house in Cambridge, which would be our home-base for the duration of the 11 days we were to be in the UK. We wonly spent about 2 hours total in Cambridge, enough time to pack a smaller carry-on and get back into the car for the 8 hour drive to Edinburgh, Scotland. This was my third trip to Europe, but my first to the UK, and E's first trip abroad, so it was nice to go by car & see a bit of the countryside. We were surprised at the number of "American" stores & restaurants we saw along the way...Burger King, McDonalds, TJ Maxx, Toys R Us. The countryside reminded me of my hometown of Lancaster, with the cows, sheep, fields & gently rolling hills.On the road we had our first (and last) fish & chips at Little Chef. It rained on & off, but finally we arrived in Haddington, Scotland, where we were booked at the Maitlandfield House Hotel. It was late when we got in & we went to the pub for a few pints, surprised at how light it still was outside at 10:45pm. We retired fairly early so in the morning we could make our way into Edinburgh to pick up our tickets at the Balmoral Hotel. 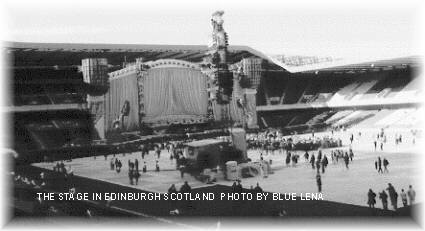 We had a full Scottish breakfast, which was included in our stay, of eggs, tomato, mushrooms, fried bread, bacon & juice. With our guts bursting we made our way into Edinburgh. Graham coached us on our proper pronunciation "Edinbura" not "Edinburo". We were warned by our hotel staff that parking was tight, but a gentleman instructed us to park near the bus station & that worked well. We walked down Princess Street, took in a few sights & looked in a few shops. Bought some postcards to send later. Saw the Edinburgh Castle from afar, stopped in a pub for a Diet Coke, and then of course the rain came. That ended our sight seeing for the day, since we hadn't brought our umbrellas. Imagine an Englishmen with no umbrellas in his car! We went to the hotel to pick up our tickets & inquired about the club gig that was rumored to be in London on June 8th. We were given a few tips, but were still very skeptical that we could get into it. However, for the Edinburgh show this night we seemed to have what we thought were good seats.

Traffic was horendous getting back into Edinburgh in the afternoon, we thought we might never make it. Finally we found a spot on the street that we had scouted out earlier in the day & walked to Murrayfield Stadium. It was a nice night it seemed & the rain had gone for a while. We found our spot in the queue outside the gates, where many people were already waiting in the sun. It was a laid back crowd that was for sure, but it was good to see a lot of young people there in the crowd. The gates opened a bit later than anticipated, but finally we were inside. I took a photo of the stage as people wandered up to secure their front row spaces on the pitch. We walked to our seats & were surprised to find that they weren't where we thought they were, no matter, we went to find the VIP lounge. This took considerable doing. No one had a clue where it was! We walked in circles, followed some Babylon Bar people who were also lost & ended up upstairs at what we thought was a Virgin Records party. The staff felt bad that no one could direct us to the proper room, so in the end they offered us each a glass of champagne while we waited, which we gladly accepted. Finally the woman came back & told us to go to the South gate. It was virtually empty, and no wonder! No one could find the damn thing, obviously the person who was to work the VIP lounge never found it either & we took photos of each of us working the VIP bar! We opened our own snacks, opened our own wine, beer, it was a laugh. 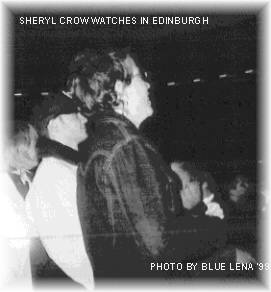 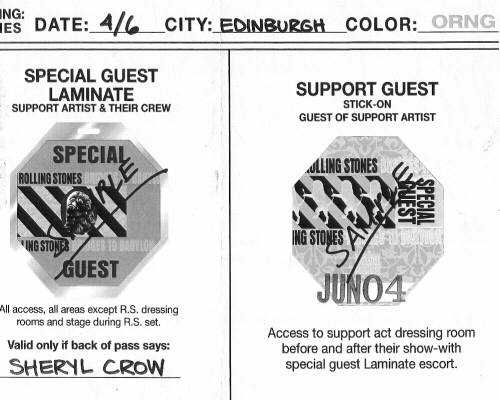 We skipped Sheryl Crow's opening, we figured we had several shows to see her perform & I had seen her before. She does a nice show & is truly a rock & roll chick, I admire her for getting to the top & being able to play with her idols, the Stones. Close to show time, we went down to the pitch & went to a great spot that was better than our original seats. It was wild to see the whole big Bridges To Babylon stage again after seeing all those small B2B shows and all those No Security arena shows. I was kind of anxious to see a big stadium show again. This time it was still light out, the first time I was to see the boys in the light of day, especially outside in the light of day. It was weird, because you see how those lights & everything really add to the effect of the show. But, as the show began, that old familiar feeling came back-WOW, here I was seeing the Stones for the 10th time in 1999, 19th time total, and in Scotland, who'd have thought? Keith bounced out from behind the stage & ripped into JJF, looking just as good or even better than when I last saw him in April. At least everyone wasn't relegated to wearing all black this time like on NS-the backing band was getting a bit bored with their wardrobes.