The Fight for Christy 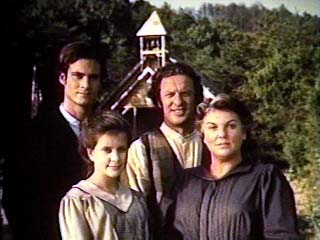 Christy: in the fullness of time

by Ken Wales,
Creator of Christy, the Television Drama


Does God care about what we watch on TV?
Only He could have arranged the presence of Christy on prime-time TV.


On Easter night last year, 19-year-old Christy Huddleston rode a 1912-vintage train into remote Cutter Gap, Appalachia, and into the hearts of 40 million TV viewers. Network TV history was made as we saw her praying openly to God about the poverty and other struggles of the mountain children who had won her heart.

Christy drew strength from God and from the Great Smoky Mountains, in whose smoke- blue shadow the Cutter Gap families lived. "From the moment I saw them," she said in quiet awe, "the mountains were a source of peace and strength to me, always there to quiet my mind and satisfy my heart."

Christy's story had inspired me too. In 1975 I had read Catherine Marshall's 1968 book based on the true experiences of her mother, Leonora Wood--the "real" Christy. As a filmmaker and as a Christian, I was attracted by the good storytelling and by the love, honor, compassion, and sacrifice I saw in Christy's decision to leave her comfortable city home and teach the mountain children. Immediately I envisioned a feature film and knew that God was calling me to be a steward of Christy. This was something I had to do.

I couldn't have imagined then that it would take 18 years to bring Christy's story to the screen. During those years, like Christy, I was uplifted by the mountaintop experiences--the "divine coincidences" that only God could have orchestrated. Also like Christy, in hard times, I prayed for understanding and strength to persevere.

After reading Christy, I called Catherine Marshall to ask about the film rights, which she had sold to MGM. "Ken," she told me, "I've been so despairing that nothing has happened with Christy for all these years. My husband and I prayed for over an hour this morning, on our knees, that something would change. And here, this afternoon, is your phone call."

A chill went up my spine--the first of many signposts that God provided when he has changed paths in my life.

While I worked with MGM to buy the rights to Christy, Catherine and I became great friends. In studying all 20 of her books, I saw that Catherine had the deep inner strength that comes only from a relationship with God. Every bit of her strength is reflected in Christy--the story of her mother.

Although MGM turned me down at the time, Christy was such a worthwhile film project that I was willing to wait. For 10 years I turned down many filmmaking offers to keep on track for Christy when it became available. Working sporadically, I coproduced Revenge of the Pink Panther, the East of Eden miniseries, and the first year of Cagney and Lacey on TV--all the while keeping my interest in Christy.

Through those years, more than once I thought I heard the Holy Spirit whisper, "Not yet. Keep ready, but not yet." God must have been hanging on to help me hang on, until the time was right. And always Catherine and I encouraged each other. "Ken," she told me, "there's God's timing for this."