Christy is the story of Catherine Marshall's mother,
Leonora Whitaker Wood. Discover what prompted Catherine
to write this great work.

"It was at that moment, standing there in the O'Teale cabin thinking of Alice Henderson, that I got my first clear glimpse of the book I had always wanted to write about the mountains, my mountains. For these were the hills of home; I had been born among mountains like these. All my life, the wind-swept heights had fascinated me--and challenged me--and steadied me.

"As if reading my thoughts, mother said shyly, 'The story aches to be told, Catherine. The secrets of the human spirit that Alice Henderson knew, the wisdom she shared is needed by so many today. And the mountains people--my friends--Fairlight and Opal, Jeb Spencer and Aunt Polly Teague, Ruby Mae and Little Burl, my schoolchildren--I want people to know them as they really were. But, Catherine, I'm not the one to put it on paper. You know, sometimes the dreams of the parents must be fulfilled in their children.'

"And suddenly, I understod how the story should be written--through mother's eyes, as I had seen it all along. Only--from the beginning, my imagination had taken hold of the true incidents and begun shaping them so that now, after many years, I myself scarcely knew where truth stopped and fiction began. Therefore, though so much of the story really happened, I would set it down in the form of fiction.


"I knew how it would be. Through many a winter's evening before an open fire, through leisurely meals at the round table in the big kitchen at Evergreen Farm, mother would reminisce while I would take notes. I would question her and probe for details: 'Now, Mother, pretend that Aunt Polly Teague is standing before us now. Tell me what she looked like. David, I need to understand him better. Tell me, why did David act that way?'

"As much as she could tell me, I would write. Oh, not the whole story. One book could never hold it all. I would tell the story of the first year only. Eleven months in a young woman's life. But what months...what a lifetime she had lived in them! How could I even get the events of eleven months onto paper? Already I could see that though I tried to capture truth, truth could never be wholly contained in words. All of us know it: At the same moment that the mouth is speaking one thing, the heart is saying another; or events are carrying us in one direction when all the while the real life of the spirit is marching in another.

"And so past all those true experiences that mother would relate to me, I would walk softly into the realm of what might have been. The rest would be my imagined story..."


From the Prologue
Christy by Catherine Marshall 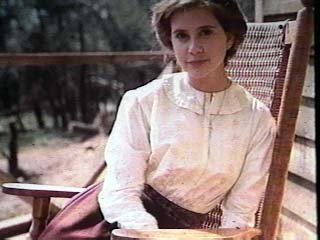