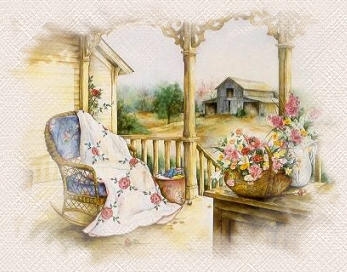 Well, if you are here, then you have decided this crazy lady is your type of person. Many think me weird, naive, or a total failure. I smile or ignore them and live the life I feel I should & say a word of prayer for the poor souls...

Until Internet I didn't try to explain my lifestyle to people. Not ashamed of it, just know many can't grasp the concept. They are viewing the simple life as a life wasted. Figure God knows what I have done & how hard I've tried to do the right thing (Though folks seem to always think they know what your life should be or is) I am not afraid of death and know how to put peace in my life, and enjoy the simple things around me, that to me is what God put me here to find and to do. Not to spend my life having to feel people approve of me or me trying to fit in. To be open to whatever was around me and to help out when I felt I should.

I see things around me that others don't take time to see. I may go to the grocery store and feel hurried to get X amount of things done, but if I see a bird begging food in a parking lot, then things wait a tad longer. I stop and open a package of cookies and feed the bird the crumbs or peel an orange and take time to share a piece with it. One lady parked across from me saw this bird diving my car and couldn't figure it out. This critter was obvious about wanting something.

I started laughing, it landed on my car door, and stared at the orange sack with head cocked. It flew away when I reached for the sack and peeled the orange, but flew back when I put a piece on the ground. See, that critter was smarter than most people! It was a super hot day and not having a credit card or checkbook, needed a human to get it what it wanted. I had a bottle of water and found a Mickey D's cup someone tossed out, tore 1/2 of it and filled the remainder with water.

The lady came over and said she had been having a super bad day, nothing going right for her and the scene with the bird made her day. She took time to see it and the frustration left. Well, that is just how easy it is...

I'm no different than anyone else. I have days when I feel no matter how hard I try that nothing seems to mean much. On those days, I think back to that day with the bird and how funny it was. Or finding a little boy sitting on a sliding board at an area store and afraid to get down. His Mom had her hands full of packages. I told him I was stuck in an apple tree when I was his size and I needed a hand down, happens to all of us... reached up and he let me lift him down. His Mom didn't see, he was afraid. Getting off a slide in a playground is one thing, he probably did it 100's of times, seeing concrete below him from that angle, another story.

I know myself well. Sometimes the angle I see things from I can take things in stride. Other times, I'm like that little boy... just need a helping hand. Deep down I think we are all like that, I hold that thought when I am around people. Makes even the most hateful people seem more human. I try to figure out why they are so hateful and usually can find the answer and either get through to them or walk away knowing I tried my best and sometimes that it just isn't the right time to do my best and see results. Not a waste of time, just isn't THE right time.

One lady I know says she doesn't want to go anyplace that isn't at least as nice as her own home. She is a good person, she just doesn't see people are good and bad no matter where you find them. I was in Des Moines, Iowa years back and ran across a man dressed in "casual" clothes. I bought him a cup of coffee, which must have been a real daymaker to him! We talked for an hour or so and he laughed with a twinkle in his eyes, he was having a good time and it showed. (Rare in the age of plastic people that prides itself on keeping an emotionless face; OK, harsh, lets say reserved)

Well, he told me he had an idea he was working on and no one agreed with him. I told him if he felt strongly it was right and everyone else felt it was wrong, to believe his opinion and then if it failed, well.. it was his choice. Better than looking back and always wondering if he should have & trusted someone elses' opinion more than his own. Later, the hotel manager came up and told me the man was the owner of the Hamm's brewery and he stopped by there from time to time.

What he did for a living never came up, fact is I could less what anyone does for a living. I either like you or I don't. Jobs, money, things you have aren't "you". For me the "you" is what you are like inside and that is what I connect to in people. I never knew a stranger when I was little. People were the joys of my life, not just family but all people. I couldn't wait to find out if they were really nice or if they were saying one thing and really meaning another. Rude awakening for me many times both then and now!!

When I was about 5-6 years old a relative took me to downtown St. Louis to see the animated windows at Christmastime. Was a big deal in the 50's both for kids and adults, everyone looked forward to the canvas coming down & viewing the display windows. The Famous-Barr store had animated scenes in every display window for a block. On the way there was a man sitting on the sidewalk with a cup and pencils and apples to sell. I looked into his eyes and saw something there. Hard to explain, but I knew he was a kind person and hurting. I had my 50 cents allowance to spend and wanted to buy an apple from him.

The relative pulled me away and said how he was a begger and needed to work an honest job instead of panhandling. Went on from there. I cringed inside, not from the man! This relative was so hateful inside when I had only seen her good side before. I knew the man heard and felt so ashamed of the relative.

We went in Famous-Barr and I was supposed to go to the toy department and look around & she would be back for me in a few minutes. I ran for the exit and the man I had seen before. I gave him my allowance and told him I was sorry for her nasty words. Gave him a hug before I left and told him to have a Merry Christmas. He wanted me to take an apple but I told him I couldn't; I had promised not to buy one from anyone & truth was, didn't want the lady to know where I went. That allowance was the best one I ever spent!

Had I a choice... I would have taken him home with me and left the relative to live his life awhile, would have been my answer to making the person more open to others situations. Later I told my Dad what happened and that I knew this man was different from those people trying to pull a fast one (Out term for people that weren't to be trusted) . I was lucky, Dad knew me & that I took things to heart that others didn't see. He told me that the relative had some growing up to do, but I had to learn to accept people flaws and all. No one is all good or all bad. Hard lesson...

From that day on I saw things differently. I made up my mind I wouldn't change my beliefs of what was right or wrong, no matter who tried to convince me. I went through school hating every second of it. Once I learned the gift of reading I was done! I memorized answers they needed to get me out of another grade and researched and read on my own to fill in the blanks & make my own decision if I believed it or not.

Brainwashed in the 50's school system wasn't an option for me. Poor teachers in a small town back then were used to push button kids, full of fear, I wasn't raised to be a push button kid... I asked a question & someone helped me find an answer or just said, "I don't know, but will try and find out".

Public school was a waste of time for me, I wanted to learn what made people act the way they do, or how come one "adopted uncle" could make a business work and another person we knew couldn't no matter how hard they tried. For me, that was what counted, useful information, & I had people around that was willing to teach me. (Outside of the school system I learned easily; with them I was never bored & I learned alot from those School of Hard Knocks people)

Thanks to that day in St. Louis I found teachers wherever I went. People that knew things I wanted answers to and lucky for me, they took time to help me learn. Some things we were taught when children are not right for us. Maybe right for the people we learned from, but not for "us". I threw away many things that wasn't right for me and lightened the load. I don't blame anyone else for anything, that is an easy way out of not facing a wrong decision I made, or not seeing people for what they really are instead of what I wanted them to be.

Guess that is the simple lifestyle in a nutshell. You lighten the load and leave what you need to, in order to be happy & to be aware of things around you wherever you are and whatever you do.

I like myself, know me better than anyone does and try hard not to let anyone change me or force me to use their beliefs rather than my own. I'm as straight with people as what they can handle...

After all, living a simple life is more about leaving the world a tad better because you were in it. Not about how many toys you gathered in the end...

Back To Country Life
Graphics Thanks To: