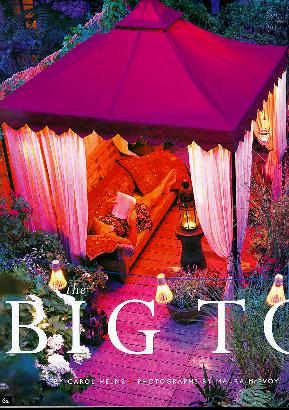 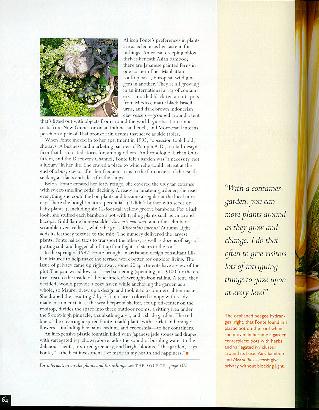 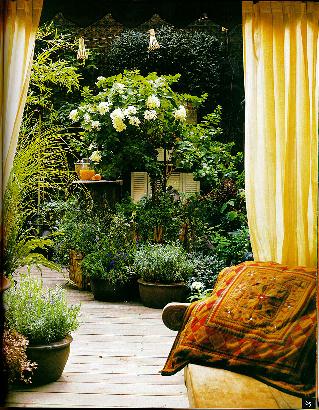 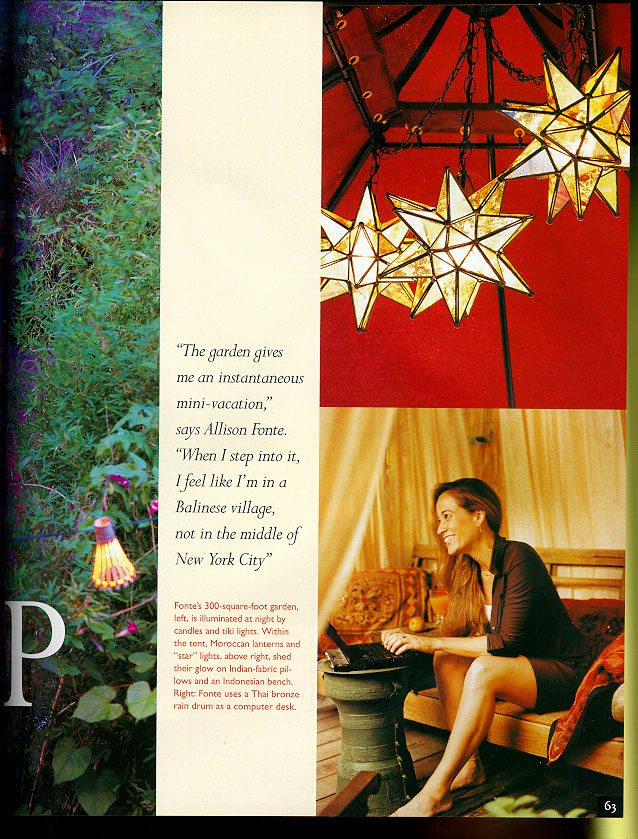 "The garden gives me an instantaneous mini-vacation," says Allison Fonte. "When I step into it, I feel like I'm in a Balinese village, not in the middle of New York City."

Fonte's 300-square-foot garden, left, is illuminated at night by candles and tiki lights. Within the tent, Moroccan lanterns and "star" lights, above right, shed their glow on Indian-fabric pillows and an Indonesian bench. Right: Fonte uses a Thai bronze rain drum as a computer desk Allison Fonte's preferences in plants are as eclectic as her taste in furnishings. American creeping phlox thrives beneath Asian bamboo; there are Japanese painted ferns in one corner of her Manhattan rooftop oasis, European wild gingers in another. They're all growing in an international array of containers -- mottled black terra-cotta pots from Mexico, matte black Israeli urns, and dark brown Indonesian clay vessels -- grouped around a tent that's fitted out with objects from around the world: guests sit on canoe seats from New Guinea or on an Indonesian bench, and Moroccan lanterns perch on a pair of Thai bronze rain drums that serve as side tables.

When Fonte moved in to her apartment in 1995, "obsession took hold," she says. A business and marketing partner of Pompei A.D., a retail-design firm that has created stores for, among others, Anthropologic, Urban Outfitters, and the Discovery Channel, Fonte felt a garden was "a necessity, not a luxury" in her life. She craved a place to which she could retreat at the end of a busy day or after her frequent trips to the far corners of the Earth, seeking artifacts and ideas for the shops.

Before Fonte created her leafy refuge, she covered the ugly tar expanse with sweet-smelling cedar decking. Already an amateur gardener, she read everything she could find on plants and became a regular at the local nursery. There she bought mature perennials ("I didn't bother with seeds or baby plants"), including six 12-foot-tall yellow groove bamboos. For a lush look, she stuffed each bamboo's pot with trailing plants such as vinca and bacopa. Gold Flame honeysuckle, Clematis montana, and other climbers scramble over trellises, while the grass Miscanthus sinensus 'Autumn Light' adds its feathery texture to the mix. The nursery delivered the largest plants. Fonte hailed taxis to transport the others, as well as dozens of bags of potting soil, and lugged it all up four flights of stairs to the roof.

In the spring of 1997, Fonte brought in artist and design consultant Lillian Maurer to help make the terrace work better for outdoor living. The issue of privacy came up right away: some 50 apartments have a view of the plot. The pair wired low-cost reed screening (spending just $100 for the entire area) to the inside of the perimeter's wrought-iron railing. A tent, they decided, would provide a cozy haven while anchoring the garden as a whole, so Maurer drew up a design and took it to a commercial tentmaker. She draped the resulting 7-by-7-foot claret-colored canopy with ready-made cotton curtains. The weatherproof shelter, set up off-center on the rooftop, divides the space into three outdoor rooms; a sitting area under the 9-foot-high pinnacle, a sunbathing area, and a shade garden. The red hue of the covering inspired Fonte to add plants with scarlet and orange flowers -- including bee balm, sedum, and crocosmia -- to her containers.

An inexpensive plastic fountain filled with Japanese jade stones and draped with variegated ivy, shown above, adds the sound of burbling water to the delicious scents, textured greenery and bright blooms. "This garden," says Fonte, "is the best investment I've made in my health and happiness." "With a container garden, you can move plants around as they grow and change. I do that often to give visitors lots of intriguing things to gaze upon at every level."

The orphaned peegee hydrangea, right, that Fonte found in a plastic pot on the floor when she moved in became a garden centerpiece; pots with herbs and variegated ivy cluster around its base. Airy bamboo and Miscanthus sinensis give privacy without blocking light.