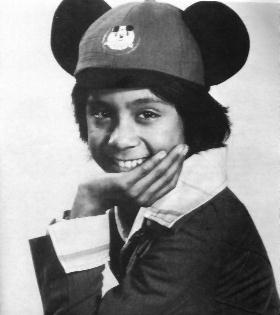 "I would rather sing and dance than do anything," says new Mouseketeer Angel Florez. "I couldn't believe it when the casting director of the 'New Mickey Mouse Club' called and told me that I was chosen to become one of the twelve regular Mouseketeers on the show. "It was like a dream come true for me."

Since he was eight years old Angel has been performing at local Shakey's Pizza Parlors, convalescent hospitals and anywhere there was a place where he could sing, dance or do impressions of his favorite television personalities.

But it wasn't until two years ago that his parents decided Angel should have formal dance training. Soon he was doing so well in his dance classes, his teacher suggested he try out for the part of Mowgli, the Jungle Boy, in the Disneyland Christmas Parade. While auditioning for the parade, Angel was spotted by a television producer who recommended him to a leading children's theatrical agent.

Angel's first two professional credits were a Pepsi commercial and a pilot for a television show. But his biggest break came when he auditioned for the "New Mickey Mouse Club," and was chosen as one of the new Mouseketeers.

"He lives and breathes the Club," says his mother Lupe Florez. "Every night when he comes home from the studio he goes straight to his room to play all the new songs and dances that he's recorded from the show. He's even teaching the little girls in the neighborhood some of the dance routines he's learned."

An accomplished musician as well as a singer and dancer, Angel plays the guitar, piano and organ. He also has a flair for comedy. A cut-up when not working, Angel is constantly entertaining his fellow Mouseketeers with his impressions of Tony Orlando, Charo and other celebrities.

Since joining the Club, Angel has taken an avid interest in his cultural and ethnic heritage. Half Mexican-American and half Apache Indian, Angel has decided to take Spanish in school "to get back to my roots."

"We are very proud of Angel," says his father Joe. "We speak Spanish at home, but Angel has always wanted us to speak English. Now he is anxious for us to speak Spanish, and for the first time he is answering back in Spanish."

Born on August 13, 1963 in Stockton, California, Angel now lives in Hawaiian Gardens with his parents, six hamsters, three dogs, four cats, a parrot and a parakeet.

Angelo Florez passed away on April 25, 1995, of AIDS. Click here to view a special memorial page.