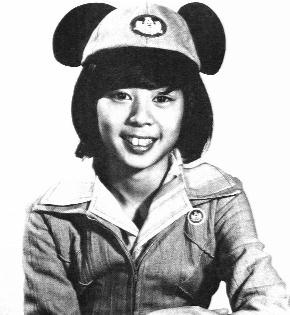 Curtis Wong has been singing for his friends and family since he was eighteen months old. His grandfather, Joe Eng, would play Donny Osmond records for him and he would sing along. Curtis was born August 23, 1962, in Vancouver, British Columbia, Canada, which makes him the oldest Mouseketeer.

At three, Curtis made his debut singing on local television. David Butler, a director of the early Shirley Temple films, saw Curtis and wanted him to star in a movie that he was planning. Unfortunately, the film never materialized. His only professional credits are two commercials -- one for Kraft and another for Nabob Peanut Butter, which he made when he was eight.

Since taking up tap dancing less than a year ago, Curtis has already won a number of local talent shows with his own routines. Traveling around British Columbia, he enjoys performing for civic groups, service clubs and other charitable organizations. During past summers, he has done a variety act at "The Showboat" Civic Theatre in Vancouver, British Columbia. Aside from his musical talents, Curtis is skilled in the martial art of Kung Fu.

A talent agent, who is a friend of the family, notified Curtis about the auditions for the "New Mickey Mouse Club." He traveled to Seattle, Washington, for an interview with the show's producers Edward Ropolo and Michael Wuergler. They were impressed with Curtis and asked him to make an additional audition tape at a local television station. Needless to say, they liked what they saw because Curtis is now a new Mouseketeer.

Curtis lives in Vancouver with his parents, William and Gail Wong, his brother, Marcus, who is seven, and his sister, Tammy, ten.