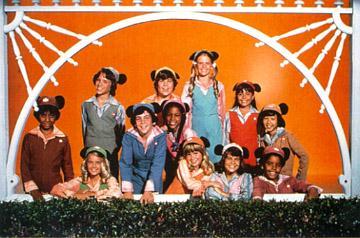 WHEREAS, In the Year of our Lord, Nineteen Hundred and Seventy-Seven, there once existed a nationally syndicated children's television show known as "The New Mickey Mouse Club"(henceforth to be referred to in this manifesto as "said show"); and
WHEREAS, The Walt Disney Company (henceforth to be referred to in this manifesto as "the parent company"), the parent company of said show, had showcased within it the epitome of positive family values, by proof of the special award bestowed upon said show by the television watchdog group known as "Action for Children's Television;" and
WHEREAS, Said show was immensely popular, by proof of having secured #1 ratings in its time slot in nearly every major television market where it was syndicated, by proof of the volumes of fan mail -- in excess of 3,000 pieces a week -- received by its cast members, known as the "New Mouseketeers," and by proof of said show's eponymous Cast Album becoming the #1-selling children's record of that year, with sales in excess of 500,000 copies; and
WHEREAS, Despite such popularity, the parent company determined that incoming station revenue was not enough to offset said show's production costs, and therefore the parent company, after producing a minimum of two seasons of episodes and one "Wonderful World of Disney" special, ceased production; and
WHEREAS, Said show's bright prospects of re-syndication re-runs for many years to come were inadvertently sabotaged by the aforementioned watchdog group, which had sought to legally eliminate all advertising by makers of sugar-laced kids' cereals, the attempted effect of which scared these cereal makers into canceling their sponsorships of said show, thus killing off said show and reducing what can be rightfully called Classic Television into less-than-trivial obscurity; and
WHEREAS, The parent company, in spite of having released many of its 1970's-era live-action motion pictures to home video in the years following said show's demise, has yet to do the same with said show; and
WHEREAS, The parent company, in spite of having re-aired said show's predecessor, the original 1950's-era "Mickey Mouse Club," on the parent company's premium cable channel, and in spite of also having produced said show's successor, transferring to this latest incarnation said show's exact title, and airing it on the aforementioned cable channel, has so far failed to re-air said show on this channel; and
WHEREAS, The parent company, in the Year of our Lord Nineteen Hundred and Ninety-Five, recognized the fortieth anniversary of said show's aforementioned predecessor with both the airing of a special and re-re-airing of select episodes on their cable channel; the parent company in the Year of our Lord Nineteen Hundred and Ninety-Seven however had neglected to give similar recognition to the twentieth anniversary of said show; and
WHEREAS, despite both the current wave of 1970's nostalgia sweeping the American public and criticism accompanied with subsequent boycotts from certain organizations against the parent company for having abandoned its total commitment towards positive family values, the parent company, by continuing to keep said show in "mothballs," is ignoring a golden opportunity to capitalize on contributing to the former and mitigating the latter; and
WHEREAS, were any disinterested third party to compare the parent company's treatment of said show with that of said show's predecessor and successor, this third party would conclude with the analogy that "The New Mickey Mouse Club" (1970's version) is the Walt Disney Company's "neglected middle child."
THEREFORE I, Joel D. Wright, a common citizen and original admirer of said show, do propose and declare the formation of the following organization, henceforth to be tentatively named:

1. Establishing and maintaining a network initially composed of the original fans of said show (via USENET and/or LISTSERV, but not excluding snail-mail for fans not yet online for various reasons) for the purpose of exchanging information, discovering common "Club" and non-"Club" interests, keeping track of the doings of the Cast & Crew, buying, selling, and trading of "Club" and Disney-related merchandise, recruiting of new fans, and (though the mere mention in this manifesto of the following activity does not necessarily encourage, endorse, condone or give license to it) the free trade without profit of home-taped episodes of said show, unless and until Goal #4a has been achieved.
ACHIEVED
2. Initiating a regularly scheduled forum or "chat session" on a monthly basis, preferably on either an open IRC channel accessible from ALL ISP's or a Web-based chatroom.
ACHIEVED
3. Starting an annual "Fan Convention with Cast And Crew Reunion," ideally to be held concurrently with the Disneyana Collectors' Annual Conventions at either Disneyland in July or the Walt Disney World Resort in September for maximum exposure; for those "New Club" fans who choose to honor any boycott against the parent company, an alternate convention should be held every January (the "New Club's" anniversary month) at a centralized, non-Disney location.
PARTIALLY ACHIEVED, WITH "DISCOMOUSECON EAST 1999" HAVING TAKEN PLACE AT WALT DISNEY WORLD'S DISNEYANA COLLECTORS' CONVENTION ON SEPT. 9, 1999!
4. Organizing an grass-roots campaign for the purpose of enticing the Walt Disney Co. to either:
a. Release all 130(+) episodes of "The New Mickey Mouse Club" onto Disney Home Video, including the "Wonderful World Of Disney" special, "The Mouseketeers At Walt Disney World," and all episodes of the original 1950's "Mickey Mouse Club," as well.
and/or:
b. Bring back said show's episodes to TV, through The Disney Channel or ABC, by leasing the air rights to a "classic TV"- or child- or family-oriented cable network, or by re-syndication.
so that the new fans can experience firsthand (along with the original fans' children and grandchildren) that which the original fans enjoyed about said shows.
GOAL 4-B PARTIALLY ACHIEVED, SIXTEEN EPISODES AND THE DISNEY WORLD SPECIAL DOWN, 114 TO GO!
5. Utilizing said grass-roots campaign to further entice the Walt Disney Co. to re-release "The New Mickey Mouse Club Cast Album" on Compact Disc, as well as the remainder of the Disneyland Records catalog not yet converted to digital format, and to submit the aforementioned Cast Album for RIAA Gold Record certification.

Comprised of one individual possessing the title and position of Chief Executive Director (CED). The one prerequisite for holding the position of CED is that the individual be an original fan of said show. As CED, this individual shall have the authority to delegate tasks to Vice Directors appointed at his or her discretion. The CED and/or his or her designated delegate shall officially represent the Project at all functions, proceedings and negotiations.

HENCEFORTH, BE IT SO NOTED that on this day, the Twenty-Third of January, in the Year of our Lord Nineteen Hundred and Ninety-Eight, that I the undersigned do declare "The 'New Mickey Mouse Club' Renaissance Project" to be EXTANT.