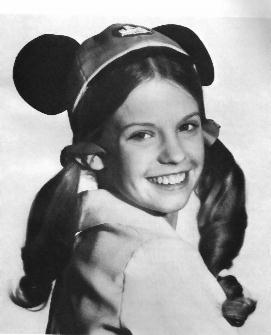 For Julie Piekarski, a little girl from the mid-west, a dream came true when she was chosen to be one of the twelve Mouseketeers on the "New Mickey Mouse Club."

Julie, born on January 2, 1964, in St. Louis, Missouri, is the daughter of Jeanette and Bernard Piekarski. She has been taking dancing lessons since she was four years old and can do everything from classical ballet to belly dancing. As a winner of several local and regional talent shows, Julie has over twenty-five trophies.

Besides appearing in local talent shows, she has danced for civic groups, service clubs and other charitable organizations. She has also performed in the St. Louis Municipal Opera productions of "The Wizard of Oz" and "Snow White".

When Julie's mother saw an article in TV Guide that Walt Disney Productions was going on a nation- wide talent search for "The New Mickey Mouse Club," she hoped that Julie would have a chance to audition. A friend of the family, who worked on advance publicity campaigns for "Disney on Parade" in St. Louis, called the Disney Studio for information. Virginia Martindale, the casting director of "The New Club" advised Julie to send in pictures and a resume of her work.

The first big surprise came when Julie received a letter telling her that auditions for the mid-west were to be held in Chicago. Julie, her family and friends drove over three hundred miles from her hometown in Florissant, Missouri, to make the auditions. Michael Wuergler, the producer, liked Julie and requested that she make an additional tape to show his co-producer, Ed Ropolo, back at Disney Studio. A week after Julie made the tape, she got a phone call informing her that she was selected as a "New Mouseketeer."

"It took me totally by surprise," says Julie. "I was hoping I would be chosen as guest talent for a 'Showtime Day' segment. I didn't think I would get to be one of the regular Mouseketeers."

Another first for Julie was the plane ride to Los Angeles. "I had never been on a plane before. . . it was real neat!" exclaims Julie. "We made friends with the stewardess on our flight and we even went out to her house and met her family. . . everything is so exciting."

An outdoors girl, Julie loves swimming, ice skating, tennis and basketball. She lives in Florissant, Missouri, a suburb of St. Louis, with her parents, a sister Jennifer and her grandmother (who makes all her clothes).

Julie, aside from her first season stint as Sue Ann Weaver on "The Facts Of Life," has appeared in the following TV shows and movies:


as Carol in the 1981 telefeature "The Miracle of Kathy Miller," which had multiple airings on Encore True in May 1998.