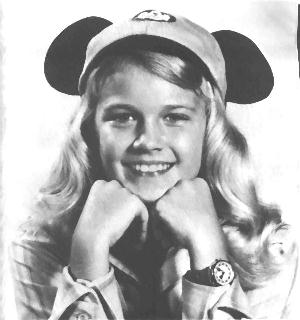 Kelly Elizabeth Parsons, reigning title holder of "Our Little Miss" beauty/talent pageant, has traded her crown for a pair of mouse ears.

Kelly, born on January 23, 1964, in Coral Gables, Florida, is the daughter of Jesse Parsons and Joan Charlton. She has been performing ever since she can remember and admits, "When I was little I wanted to be a movie star."

For the last three years, Kelly has performed in the Orange Bowl Parade and half-time show with Anita Bryant and Joe Garagiola. Last year she was joined by her eight-year-old sister, Kim, in the half-time festivities.

Kelly loves to dance, especially tap, and she tapped her way to the "Our Little Miss" title in 1975. A talent agent who had heard that Kelly had won the title asked her if she would like to audition for Michael Wuergler, co-producer of the "New Mickey Mouse Club to central Florida on a nationwide talent search. Later Kelly auditioned at Walt Disney World for Mike, who asked her to make an additional tape at a local television station so that his co-producer, Ed Ropolo, could see her in action back at the Disney Studio in Burbank.

"When they called to say they wanted me for the 'New Club,'" recalls Kelly, "my mother cried, but I was just quiet for a few minutes. I didn't know what to say."

Kelly has performed mainly for civic groups, charitable organizations and in local talent shows. Her only professional credits have been print ads for clothing firms.

Because of the heavy rehearsal and production schedules for the "New Mickey Mouse Club," Kelly had to give up all the activities planned for her as "Our Little Miss." She will still be able to keep her title and the $2,000 college scholarship that she won. She hopes that she will be able to go to Baton Rouge, Louisiana, to crown the new winner in August.

Besides tap dancing, Kelly is also proficient in ballet, jazz and pantomime. Since joining the "New Club," she realizes that she can sing too. "She never had any confidence in her singing,"says her mother, "until Sheryl Ford, the vocal coach, told her that she had a dynamic voice. Now we can't keep her quiet."

Kelly has appeared in a few movies and TV shows:

As Pat in the 1980 telefeature, "Children Of Divorce."

As Wanda in the "My Funny Valentine Tux" episode of "Alice"

As Laura Lee in the 1985 sci-fi/horror movie "Evils Of The Night," which was available as early as 1992 in the Movies Unlimited video catalog.

Kelly resumed the beauty pageant trail after the Club, leading to her being crowned Miss California USA 1986, the springboard to the Miss USA Pageant and then the Miss Universe Pageant. Kelly made it all the way to the finals for Miss USA, but unfortunately ended up 4th Runner-Up.