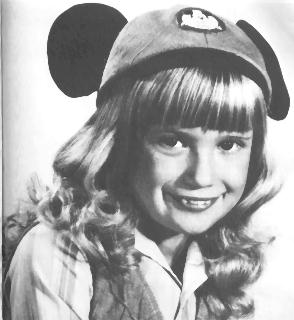 Some of the new Mouseketeers hail from cities and towns located far from Southern California. But on July 4th, 1968, future Mouseketeer Mindy was born to Sheila Feldman at St. Joseph's hospital, just across the street from the Disney Studios.

Even though Mindy is the youngest Mouseketeer, she has more credits than any of her fellow Mouseketeers. A professional model since she was eighteen months old, brown-eyed blonde Mindy has appeared in numerous print ads and almost a dozen commercials. She was also featured in a variety television special, "Ripoff," that was hosted by her father Robert Feldman, a musician in the band "The Strangeloves."

Unlike the other Mouseketeers, when Mindy auditioned for the "New Mickey Mouse Club," she really didn't know how to sing or dance (mainly because she had no previous dancing or vocal training). But with her great personality and ability to learn quickly, she was chosen anyway.

"It was discouraging for Mindy at first," says her mother. "She was trying to do all the things the older kids were doing, not only on the dance floor, but also in the classroom. Everyone has tried to explain to her that she is only seven and not to worry about it."

A determined little girl, Mindy takes extra lessons after working hard all day at the Studio. The older Mouseketeers also help her with the new routines and production numbers so that by the next day, Mindy has everything down letter perfect for the taping of the show.

When Mindy grows up she would like to be a bass guitarist (like her father), a dancer and an actress. "It shouldn't be too difficult for Mindy," says her father, "because once she sets her mind on something, watch out!"

An outdoors girl as well as an entertainer, Mindy loves sports, animals and life in general. She lives on a small ranch in Northridge, California with her parents, where she has a pony named Flash, five dogs, six cats seven ducks and a younger brother, Corey.

Mindy has continued her acting career through to this day. Among her appearances are:

As Nancy Hollander in the 1980 telefeature "Reunion," which aired on Movie Plex in late April 1998, and several times on Encore Love in July 1998.

As "Girl #3" in 1989's critically acclaimed "Say Anything...", which can occasionally be seen on USA Network

As Francesca in 1994's "South Beach Academy," and as Thelma in 1997's direct-to-video feature "Busted," both films also featuring her younger brother Corey Feldman in primary roles -- and in the case of "Busted," as director -- and both have intermittent runs on cable channels such as HBO, Cinemax, and USA Network

Mindy's most recent appearance was on "The E! True Hollywood Story: Corey Feldman, Lost Boy Found" which was taped in Dec. 1997.

Mindy is currently a member of the Gene Bua Acting For Life Theatre in Burbank, California.

I've finally put together a site that's all about Mindy -- my Mindy Feldman Appreciation Site! There you'll find more Mindy pics, the expanded mini-bio from Teen Beat, and a more comprehensive filmography. Enjoy!