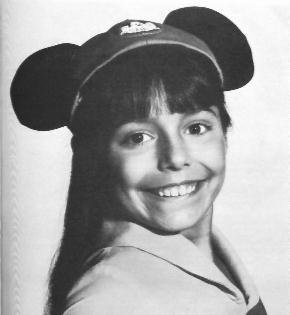 As far back as she can remember, Mouseketeer Nita Dee has loved to dance. But it wasn't until the ripe old age of three that she had her first dance lesson. Constantly on the move, it is not uncommon to see Nita dancing down the supermarket aisles, making up routines as she goes along. "She would dance all night if we let her," says her mother Linda Di Giampaolo. "Nita is basically a very shy person, and originally we hoped by giving her dance lessons she would come out of her shell."

Before becoming a Mouseketeer, Nita had no pervious professional experience. On weekends she would travel with the Cor-Vic Hollywood Entertainers, a variety entertainment troupe, where she danced at various civic functions, service clubs and even for the inmates at Tehachapi Prison.

As a result of her association with Cor-Vic, Nita was invited to appear in the pilot for "The Gong Show." One of the other contestants on the talent show told Nita about the auditions of the "New Mickey Mouse Club" and offered to submit her photo and resume to Walt Disney Studios. A week later, Nita received a phone call telling her that she had an appointment to see the casting director of the "New Club."

"Nita had never auditioned before," says her mother, "and she got sick just before she was to try out. But once on stage Nita is a completely different person. You would have thought she did this all her life." Needless to say, she wowed them because she is now one of the youngest members of the "New Mickey Mouse Club."

Besides dancing, Nita enjoys all kinds of athletics. "I have to like sports," giggles Nita, "all my cousins are boys and they are more interested in playing football and basketball than with dolls--but I like dolls, too." As a member of a junior bowling team, she has won numerous awards, including High Series last year. Nita has also won ribbons in swimming competitions.

Born on August 6, 1966, Nita lives in Lakewood, California with her parents Linda and John Di Giampaolo and younger brother, Michael. She shortened her name from Benita Di Giampaolo (pronounced Dee-Jim-Polo) to Nita Dee, "Because people keep mispronouncing my name. It makes it easier on everyone except my family -- especially my grandparents. We are all very proud of our Italian heritage and they can't understand why I'm not using my full name. There aren't that many Di Giampaolos around, you know."