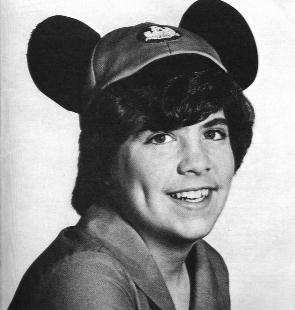 Mouseketeer Scott Craig, whose eyes are blue and hair is brown, is a product of the Hollywood "talent call," a term applied when a large number of children are chosen to play extras in motion pictures and television. Usually, once an extra, always an extra -- but not Scott. He rose above the crowd at the tender age of eight. At work since he was six, he was finally spotted by an agent who wanted him to do commercial work. Since then, he has done commercials for Milton Bradley, Mattel, Pioneer Chicken, Arco, and Biz laundry detergent.

Scott loves to sing and dance. A member of an entertainment group called "The Individuals," Scott has the enviable position of being the only male performer in an ensemble with seven girls. With the group, he has entertained at civic clubs, hospitals and other charitable organizations. As a solo performer, he has danced and sung on the "Lily Tomlin Special" and the Dick Cavett Special "Backlot, U.S.A."

Born on February 9, 1964, in Van Nuys, California, Scott now lives in Lakewood, where his parents own an independent newspaper dealership. Before becoming a Mouseketeer, he would deliver papers. On the weekends Scott still gets up at 3:00 A.M. to help with the family business.

Always on the go, Scott enjoys many things, sometimes all at once. But because of the heavy production schedule on the "New Mickey Mouse Club," he's had to give up a few of his regular activities. Besides helping with the newspapers, he takes guitar lessons, is a member of a little theater group, an "Individual" and a football player.

"If he had it his way," says his mother Diana Craig, "he would still be doing all his projects. The only reason he gave up football was because he couldn't get home in time from the studio to make practice."

A positive thinker, as well as a doer, Scott was convinced that he would become a new Mouseketeer. When his sister Leanna was told she was too old to audition for the "New Club" (she is fifteen and also a member of The Individuals), Scott's reply was, "Don't worry, when I become a Mouseketeer, you can come to the studio and be with me."