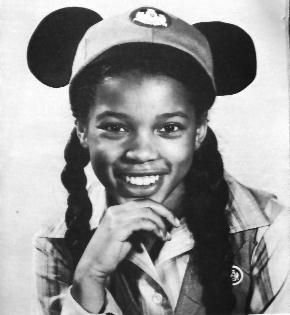 If it hadn't been for her dance teacher, Al DeRay, Shawnte might not have been so lucky. He was the one who recommended her for one of the Mouseketeers at Disneyland. While performing at Disneyland, Shawnte was spotted by a leading children's talent agent. Impressed with Shawnte's talent and enthusiasm, the agent signed Shawnte for television commercials.

Since then Shawnte has appeared in commercials for McDonald's, Mattel, Kellogg's, Star-Kist, Hi-C and Heath Candy Bars, as well as on the television shows "Marcus Welby," "Mr. Wizard" and "First Family Washington." She was also a semi-regular on "The Bionic Woman" until she moved out of the classroom and into the "Mouse Clubhouse."

But Shawnte doesn't want to be a professional actress when she grows up. "Right now it's fun," says Shawnte, "but acting gets a lot harder as you grow older, especially if you are serious about it." She would like to be a lawyer because she feels she has a real talent for it. "I love to talk, cross-examine my friends and get to the truth of things. I'm really curious," says Shawnte with a smile.

She also likes to sew her own clothes, play the piano and violin. Enrolled in classes for gifted children since she was in the first grade, Shawnte has taken courses at both the University of Southern California School of Music and Los Angeles City College. She recently relinquished her crown as Miss Pre-Teen California 1975-76, a title of which she was expecially proud because she was the first black ever to receive the honor.

Born February 25, 1965, Shawnte lives in Los Angeles with her mother, Lucille Northcutte, and her grandmother, Mary Johnson. She's hoping to move closer to the Disney Studios in Burbank because, "Did you know you can have your own horse in Burbank? Now that's what I would really like, my own horse."