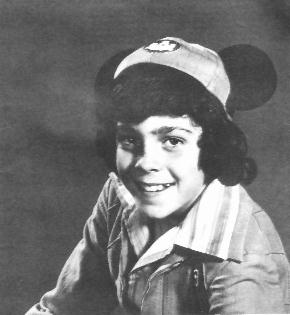 A show business veteran at the age of twelve, Todd has also appeared in numerous other television shows including "Carol Burnett," "Kojak," Dick Cavett Special, "Backlot, U.S.A.," and movies for television, as well as a half dozen commercials. He recently made his movie debut in United Artists' "Burnt Offerings."

"But I haven't decided if I want to be an actor or an athlete when I grow up," says hazel-eyed, black- haired Todd. "Football, basketball, singing, dancing and acting all interest me a lot."

A typical all-American boy, Todd hopes to be starting his fifth season of Pop Warner Football ("If the producers let me," says Todd. "They're afraid I might break my arm or something.") He has also been playing Biddy Basketball for the past two years and is crazy about judo and horseback riding.

"Todd seems to have a million and one things going at the same time," says his mother Dee Turquand. "But since the taping of the 'New Club' he's had to slow down considerably because of the tight production schedule."

In addition to his television work, Todd is a member of an entertainment group called "The Showtimers" (his older brother, Greg, is also in the group), in which he performs as both singer and dancer for local civic functions and charitable organizations.

Todd first was bitten by the acting bug at the age of five when he tagged along with Greg for an interview for a role in a movie. The casting director of the show saw Todd through the crack in the door and asked him to com in. Todd didn't get that part, but the casting director recommended him to one of the leading children's theatrical agents. The agent signed Todd and he has been working ever since. By the time he was eight, Todd was also doing little theater work. His first legitimate stage role was Winthrop in "The Music Man" at the Morgan Theatre. From there he went on to appear in "The Sound of Music," "All My Sons" and "The Miracle Worker" at the Westchester Playhouse.

Between athletics and entertaining, Todd finds time to take tap, jazz, trombone and guitar lessons, as well as being a member of the Boy Scouts and active in his church. He resides in Westchester, California with his mother, Dee Turquand, and his brother.