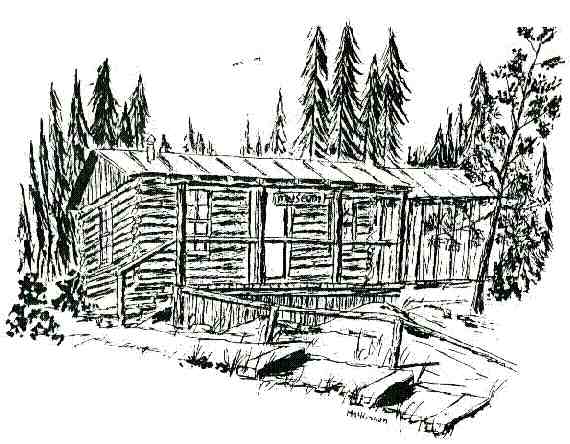 In the early to middle 1800s, a typical pioneer farm would be approximately 50 acres in size. The homestead would consist of a cabin, barn, several outbuildings and fields that were first cleared, then plowed and fenced. Corn, wheat and potatoes were the major field crops. Oxen do much of the heavy work around the farm as they are stronger than horses and do not require supplemental grain. However, they are much slower and less agile than horses, and as soon as a farmer got the farm established, he would think about "trading up" to horses. In addition to the oxen, the pioneer's livestock would have included hogs, a milk cow, sheep, chickens and assorted poultry. 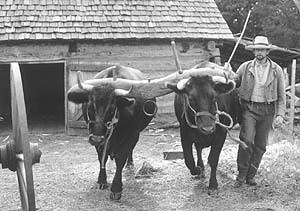 The women cook in cast iron cookware, including Dutch ovens, over the open hearth. Other work includes spinning wool into yarn, quilting, making lye soap, dipping candles and tending the garden. Women would also work in the fields with the men, as needed.


DINNER
Coming in from the chores of the day you'd be greeted by the smell of freshly baked bread and treated to hot spiced apple cider. The main course may have included roast pork or baked chicken prepared in a wood-burning stove; real mashed potatoes and gravy; hominy; fresh-baked yeast rolls with jams, jellies and homemade butter; two side dishes; and fruit pie and fancy cake for dessert

Or it could have been a savoury soup; roast beef with Yorkshire pudding or roast chicken with apple dressing cooked on a woodburning stove; mashed potatoes and gravy; a vegetable dish; fresh baked dinner rolls and churned butter, jams, jellies and pickles; and fancy cake, preserved fruit and fruit ice for dessert.

PIONEER TOWNS
The major interpretive theme of the village or town is the interdependence between farmers and the craftsmen and merchants of the town. The 1800s village or town would have been the major supply center for the farmers in the surrounding area. 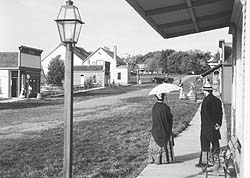 Craftsmen came and opened shop,and these would have included a blacksmith, a potter, a broommaker and a carpenter. The latter would also have served as the village undertaker through his role in the construction of wooden caskets. The general store would have been stocked with many items and would have had a large inventory of small items for sale. The village or town also would have included a schoolhouse, doctor's office, law office, vet clinic, bank, newspaper office, millinery/dress maker's shop, drug store, church, cemetery, implement dealership and residence

As the town grew in size, so did the business. The follow excerpt is from the Towns and Villages Directory in the County of Ontario in 1866.

OSHAWA: - The village of Oshawa is situated in the township of East Whitby, County of Ontario, about 2 and a-half miles from Sydenham Harbour (note: Sydenham Harbour was eventually incorporated into the Town Of Oshawa and renamed Port of Oshawa.), a port on Lake Ontario. This village is beautifully laid out in a section of country unsurpassed in the province for fertility and cultivation, having excellent water power and provided with every facility for transportation. A large business is done in the produce of the country, and the place is especially celebrated for the flour of a very superior brand. Several manufacturies have been established in the village making extensive shipments of their goods to different parts of Canada and giving employment to a large number of mechanics, who in their turn are always supplied with read cash while purchasing their temporal necessities at the numerous and well supplied stores of the Oshawa merchants. The Grand Trunk Railway has a station here, at which all trains stop. Distances from Toronto thirty-three miles and from Montreal three hundred ( The entry then goes on to describe the various foundry, machinery, milling and tanning establishments in the village. The concluding paragraph continues.)

The merchants of Oshawa, as a class, are enterprising, energetic and public spirited. The stores, which are mostly built of brick, are well supplied with goods. which for quality, variety and price, enables the seller to compete with any house west of Montreal. Farmers visiting this town from any part of this and adjoining counties will find here a market second to none in Canada for the disposal of their products, and from which they can supply themselves as reasonable as from any retail town in Canada.

PIONEER FARMING CONT.
Life on the farm in 1900 was very different from the pioneer period 50 years earlier. The 1900 farm was three times as large, over 120 acres, and was worked with horses rather than oxen. The amount and variety of cast iron and steel implements on the farm testified that an industrial revolution had occurred. Buildings are frame, not log, and they are brightly painted. Other outbuildings would have included a corn crib, hog house, chicken house, machine shed and outhouse. A wooden windmill would pump water to the stock tank around the farm yard. The house was filled with manufactured furniture, cooking utensils, imported pottery, and other goods ordered from mail order catalogues. Clothing was made on a treadle-sewing machine, not stitched by hand. In short, between the two farms was a world of difference. However, the family still spent most of its time raising, processing and preserving food. In addition, the main crops were still the same: corn, potatoes, beef and hogs. Another crop, oats, became important as animal food. The family farm continued to be the basic social and economic unit, except for a weekly outing to town, and life revolved around the yearly cycle of farm work. 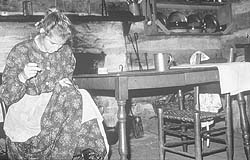 The 1900 Farm maintained the traditional corn-corn-oats-hay-hay rotation through its fields where work is done by Percheron draft horses. The farm also raises cattle, sheep, hogs and chickens and produced much of its own food from a large garden and orchard. The women would have cooked a large midday dinner over the wood-burning stove and follow the traditional weekly routine of housework (Monday - wash day, Tuesday, - ironing, Wednesday - baking, etc.).