When we talk of metaphysics, we will assume we are talking about everything that constitues awareness in the universe. In our everyday reality, we are convinced of the reality of objects see and reach out and touch. This gives rise the the Subjective/ Objective Metaphysics (SOM) dualistic thinking that we have grown comfortable with and which is so hard to break from.

This SOM thinking dominates our reality completely from the time we are born. In addition, there is another viewpoint on reality called Eastern Mysticism, which views reality and the observer of that reality as one and the same entity. It is also a learned reality like SOM, but is only taught in certain parts of the world as a working metaphysics of reality.

In his book Lila, Robert M. Pirsig advanced another metaphysics idea called the Metaphysics of Quality (MoQ) in which he shows how a value driven metaphysics model will better fit what we know of reality than will a SOM model or a mystic model.

Here we will examine each via putting them into models in real space and see how each fits into the MoQ wimple model. 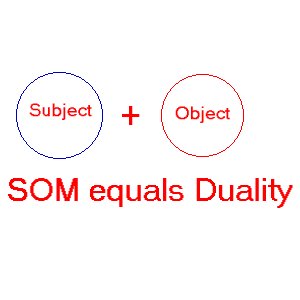 There are several problems with SOM, starting with the fact it is a deterministic metaphysics. SOM operates in an action/reaction 180 degee type of way. We see a cup and it becomes a cup. Action/reaction is such an accustomary way of seeing the universe around us, we rarely if ever question its truth.

We all know the universe doesnt always act in this fashion, otherwise there would be no gambling, no people who make a living attempting predict the weather, and no quantum mechanics, just to name a few probabilistic events which are non-deterministic fundamentally in the way they operate.

Yet because of the deeply ingrained way we think in a Subjective/Objective nature, we ignore these inconsequential doubts as insignificant.

Events in the universe seem to have multiple minimums build into them that SOM fails to account for. What this means is, there may be multiple structures within the same minimum energy, while at the same time, no two points can occupy the same space, at the same time. This is where things get a little sticky for SOM adherents to explain.

In addition, as the SOM model shows, both the observer and the object are separate and exist independently of each other. Neither is dependent on the other for survival, and yet when we attempt to reconcile this with what we know of reality, we are unable to perform the separation, thus the debate on sentience and awareness arise.

A solution is to somehow bring both the subject and the object into interrelated connectedness, which is what the mystic point of view attempt to do.