Top 25 Most Hardcore Wrestlers ever 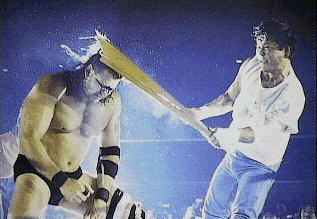 He has been cut with barbwire, blown up, electrocuted, stabbed with sticks, knives, scythes, drills, and is in the Guiness Book of World Records for having the most stitches ever.  The innovator of the Death Match.  Almost died in the ring twice.  Once, he hit the barbwire ropes too high, and cut his throat.  Also, after a Jungle Death Match with Tiger Jeet Singh, he jumped into a lake, and the water was contaminated, and he suffered severe internal injuries. 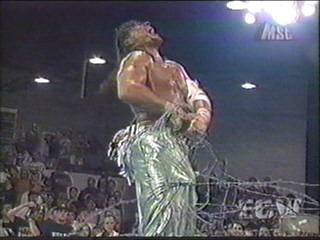 He is Homicidal, Suicidal, and Genocidal.  He does the most insane high flying moves, and has broken more tables than a busboy has cleared.  Also, he doesn't mind wrapping himself in barbwire, as the picture above shows.  Has broken his ribs in a match against Cactus Jack, his neck against Chris Benoit, his Jaw against Taz, and with RVD as his partner against Tommy Dreamer and Sandman.  In that match, he did the Triple Jump Moonsault, and hit his mouth of the leg of a table, breaking his Jaw and knocking out 4 or 5 teeth.  If he would've hit his throat instead of his mouth, he would have surely died. 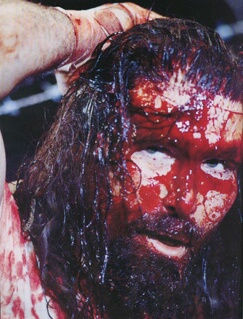 Has been called the American Onita for years.  Won the IWA King of the Death Match tournament by beating Terry Funk, after falling off a ladder and onto the barbwire ropes.  Should work for a furniture store, he can sell a chair so damn good.  Master of the Insane bump.  At King of the Ring 98, he was thrown off the top of a 16 foot cage, thrown threw the roof of the same cage, and slammed repeatedly onto thumbtacks.  He suffered broken ribs, a concussion, and several missing teeth.  One of the teeth shot through the roof of his mouth, and entered his nasal cavity.  The tooth can be seen in his nose during the match. 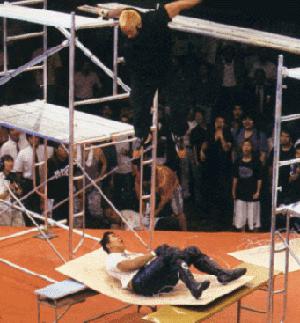 Was the man that made Big Japan cool.  Has fought in matches with piranhas, cactii, scorpions, a scaffold with a barbwire trampoline under it, flourescent tubes, etc.  The picture above tells all. 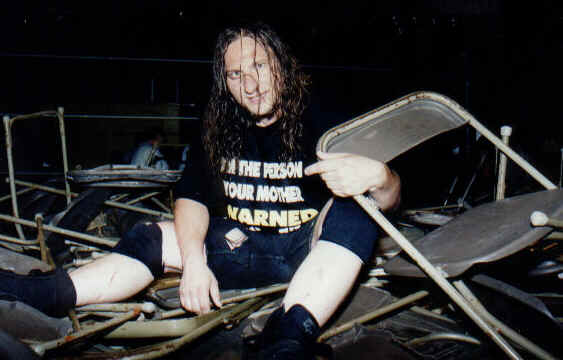 This maniac from Combat Zone Wrestling has been involved in some of the most brutal matches fought in the United States.  He was the recipient of Justice Pain's leap from the skylight in the CZW Arena, putting Lobo though a triple stack of flaming tables.  This incident is appropriately referred to as the "Pyramid of Hell."  Lobo also fought Justice Pain in the brutally cruel CZW Cage of Death, which included barbwire, cactus plants, flourescent tubes, and a Foley-like fall from the top of the cage.  Lobo is one of the reasons why CZW is the most hardcore, or, as CZW fans like to say, Ulraviolent fed in the US today.  Has fueded with Justice Pain, Nick Gage, TCK, and Kronus. 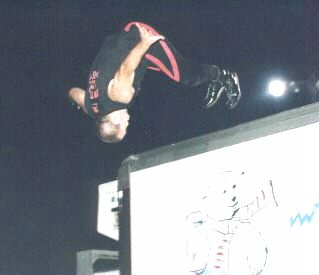 Another mainstay in CZW, the "Future of Hardcore" is just what his nickname says.  He had a classic hardcore battle with Justice Pain at the ECW Arena during Break the Barrier, which was easily the best match on the tremendous card.  He has had hardcore wars with nearly ever lunatic in the Combat Zone.  Has had fueds with Justice Pain, Zandig, and Lobo. 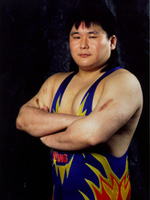 Started W*ing, one of the most hardcore Japan feds ever.  Was powerbombed onto fire, and reveived 3rd degree burns, losing 85% of his shoulder and back muscles.  Don't believe me??  Check out the pic below: 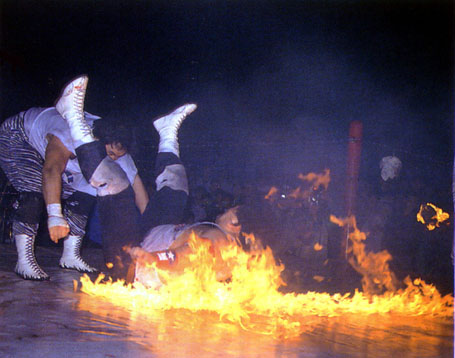 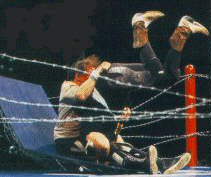 Its unbelievable how long this man wrestled.  At 50+, wrestled in the IWA King of the Death Match Tournament, and lost in the finals to Cactus Jack.  Continued to wrestle in hardcore matches, including the infamous Born to be Wired match against Sabu, the 3-Way Dance at Barely Legal against Sandman and Stevie Richards, which he won, and then went on to beat Raven for the World Title that night.  Has spilt more blood than anyone, EVER. 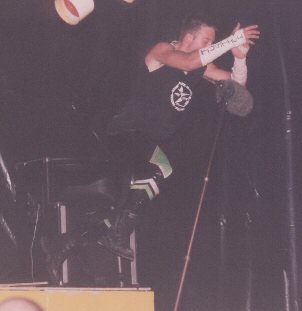 Probably the best all-around wrestler in CZW, Justice Pain can get "Ultraviolent" just as much as anyone in the Combat Zone.  He has been known to fly off the CZW Arena balcony, shown above, and even dropped through the skylight to put Lobo through several flaming tables.  His brutal fued with Lobo has earner him this high spot on this list.  They have fought in several matches, including the CZW Cage of Death, and a Barbwire Dog Collar Match.  Has also fueded with Nick Gage. 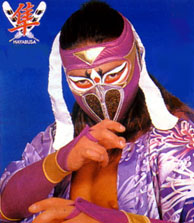 The most imitated wrestler in the World today.  The creator of the 3 most spectacular aerial moves ever: , The Firebird Splash (a 450 degree splash off the top), the Phoenix Splash (a corkscrew somersault senton backsplash), and the Stardust Press (a corkscrew 450 splash off the top).  The amazing thing is, none of these moves are his finisher.  He puts people away with the Falcon Arrow, which is a vertical suplex turned midair into a Michinoku Driver.  Also, is no sranger to death matches.  Fought Onita in a Explosive Barbwire Cage Tomebomb Death Match for Onita's retirement match, in which he was thrown facefirst into the cage right when the Timebomb went off, and then attempted a moonsault off the cage, and missed.  OUCH!!  Him and Masato Tanaka fought Terry Funk and Mr. Pogo in what is said to be the most gruesome Death Match of all time. 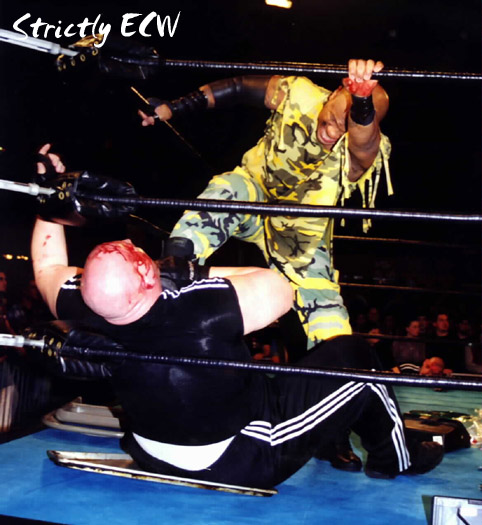 When "Natural Born Killaz" blares over the PA, you know someone's about to be dealt an ass-beatin like only one man can inflict.  From running through SMW and ECW with his former partner Mustafa, New Jack has become a hardcore legend of wrestling right up there with Sabu and Mick Foley.  Not afraid to dive off of balconies, semi-trucks, scaffolds, tops of cages, and basketball backboards.  His balcony dives almost turned fatal at Living Dangerously 2000, when New Jack and Vic Grimes fell from a 15 foot scaffold, with the 400 pound Grimes landing on top of New Jack's chest.  Since then, New Jack has recovered, and will soon return to his maniacal ways. 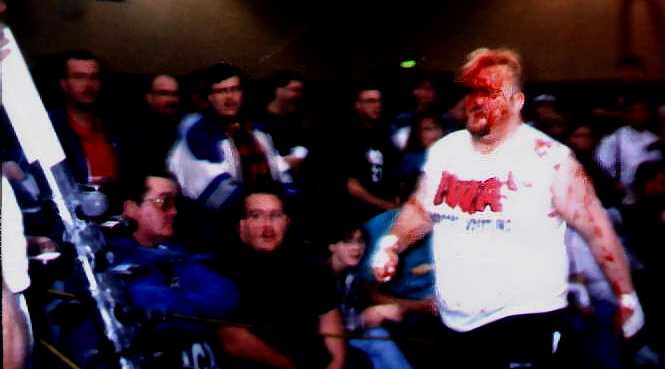 ECW veteran who started the IWA Midsouth promotion, the most extreme federation in America at one time.  At IWA's April Bloodshowers, his loss of blood can only be compared to the Mass Transit Incident.  Has competed in Japan in death matches, but is most famous for the bloodiest fued in ECW history against his brother Axl.  Once stated that the cheapest he would do a death match for was 50 bucks.  Hey, I got 50 bucks, I wonder if he'll wrestle in my backyard??

Little known Big Japan wrestler, is one of the biggest bump takers in the business, IMO.  During 96-97, was continually abused by Matsunaga, who basically beat the hell out of him.  Matsunaga jumped off a scaffold onto Yamakawa, who was prone on a barbwire board laid across 2 tables.  Matsunaga must have landed wrong, because he hit Yamakawa right in the face with his knees.  Matsunaga also powerbombed him off a scaffold onto 2 tables, OUCH!!!!  More recently, during a "No Roped Barbed Wire fire, pinfalls count anywhere, lightbulb board,casket
full of lightbulbs death match for the Big Japan Death Match Title," against Shadow WX, Shadow tossed a broken flourescent light tube at Yamakawa, which sunk 2 inches deep into his back.  It was truely the sickest thing I've ever seen in wrestling.

From being Onita's "bitch" and getting cut and blown up in FMW to getting hit with the hardest chairshots known to man in ECW, Masato Tanaka is one of the major stars of the future, whether it be in Japan or the US.  If you take away the scarred up body and the chairs and tables he loves so much, the guy can wrestle, too.  His matches with Gladiator/Mike Awesome in ECW and FMW are some of my favorite matches ever.

Only one of 2 men on this list to have competed in every single Death Match federation in Japan.  Was a semifinalist in the IWA's King of Death Match Tourney, and lost to Cactus Jack in a brutal Spike Nail Death Match, after beating Hiroshi Ono in a thumbtack match, which was the best match of the tournament.  Nakamaki and Ono tossed eachother into thumbtacks several times, and both looked like human pin-cushions after the match.

The Innovator of Violence, Tommy Dreamer has been a staple in ECW since day one.  Has been chokeslammed off more balconies thru 3 or 4 tables more times than he can count on his fingers.  He was also the first wrestler to use a frying pan. 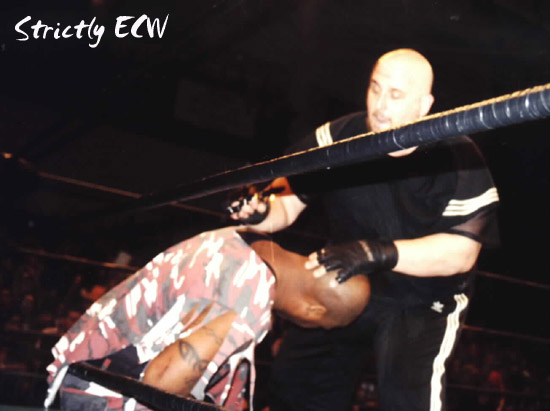 After introducing hardcore wrestling to the west coast in APW, the "CEO of Hardcore" has taken ECW by storm.  Is known to put people through tables with a massive somersault senton from the top rope.  Was involved in a botched spot with New Jack at Living Dangerously 2000, where Grimes did a front flip from a 15 foot scaffold, and landed on New Jack's chest, who had fallen with Grimes simultaneously. 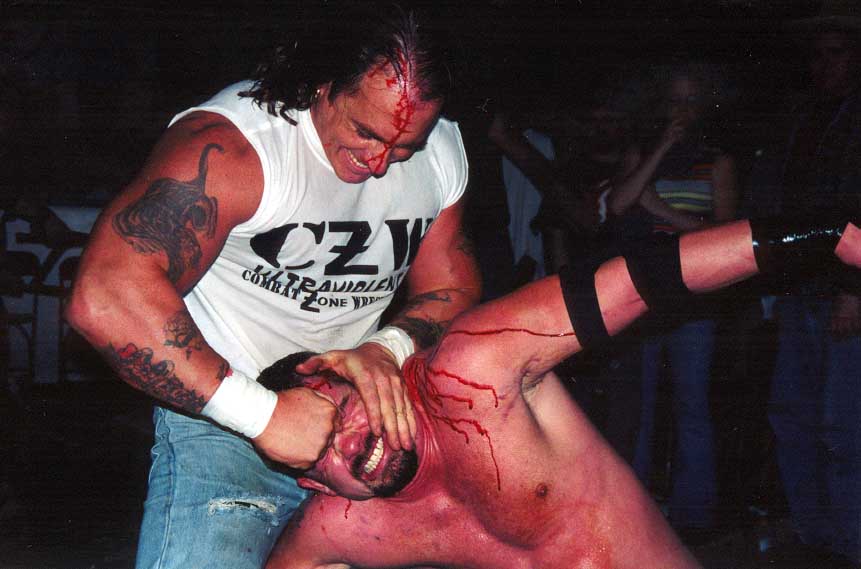 The owner and current Heavyweight Champion of Combat Zone wrestling, Zandig is the epitome of "Ultraviolence."  Fought Hardcore Nick Gage in a Street fight where the canvas and padding was removed from the ring to reveal plywood, the turnbuckle pads removed, and the ring ropes stripped to the bare steel cable.  Was also attacked by Wifebeater, shown above being pummeled by Zandig, with a weedwhacker.  Wifebeater cut Zandig's back severely with the weedwhacker, then proceeded to pour salt and gasoline in the open wounds.  Hardcore enough for ya? 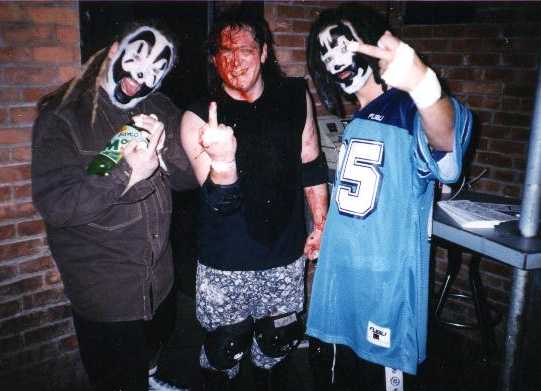 IWA Midsouth's resident Psycho, Madman Pondo has been tossed in thumbtacks and barbwire just as much as the next hardcore wrestler.  Has also made a few appearances in the Combat Zone.

The beer swillingest, chair swingingest, cigarette smokingest, King of Hardcore.  Was one of the men who helped put ECW on the map with his hardcore skills.  Hell, he even would bust himself open before the match by smashing beer cans over his head, but not before he chugged them like a pro.  Has spilt gallons of blood, been wrapped in barbwire, thrown off ladders through tables, and anything else you can think of that makes ECW so great.  I bet he never thought WCW was the place he would get injured, doing their stupid ass Hardcore Junkyard Match.  Good thing he got out of WCW, and is now back where he belongs. 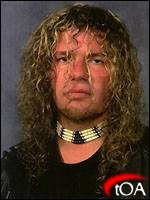 Has spilt as much blood as anyone ever in ECW.  Now, since he is finally home, we will get to see some more of his superb hardcore skills.  No stranger to barbwire matches, he fought the Sandman in one at Holiday Hell 96, and defeated him to capture the World Title. 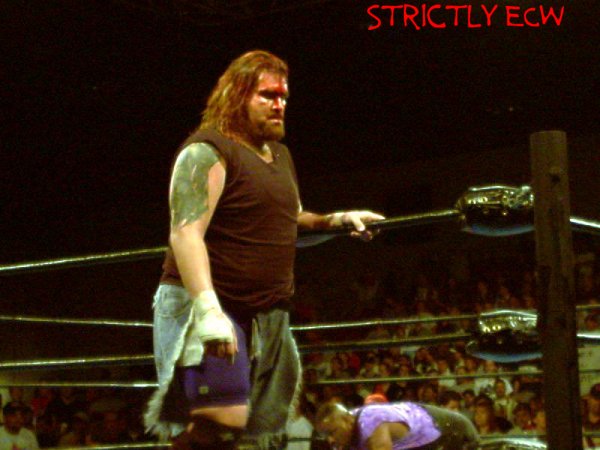 Was hardcore as Abbudha Singh, and is even more hardcore as Balls Mahoney.  The native of Nutley, New Jersey has spilt blood in Japan, Puerto Rico, IWA Midsouth, and ECW.  I think he enjoys getting powerbombed thru those flaming tables. 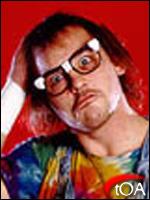 Now, Spike might seem like an unlikely person to make this list, but hear me out first.  When most wrestlers hit the canvas, it makes a "boom" type sound; but when Spike, at 155 pounds, hits the mat, its more like a "thwack."  In 97, Spike was tossed around like a rag-doll by Bam Bam Bigelow, and was even thrown into the crowd a few times.  Then, he went on to being constantly beaten on by his "half-brothers"  The Dudley Boyz.  Has been tossed into crowds, powerbombed thru flaming tables, and has jumped off balconies.  Every time Bubba Ray powerbombs him from the top, it makes me cringe. 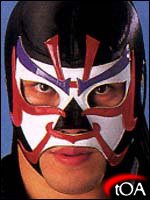 Probably the greatest high-flyer in wrestling history.  Has broken his skull twice in matches, more famous, the finals of the Super J Crown 96 against Ultimo Dragon, when he missed a somersault plancha, and landed right on his head. 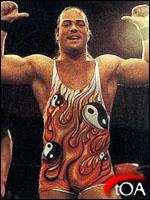 Mr. PPV, the Whole Fuckin Show, Rob Van Dam is truely an innovator in hardcore wrestling.  He can take it to the mat with anyone, but prefers to get down and dirty.  The height he gets on his top rope moves is unbelievable.  Also, he uses chairs better than anyone I've ever seen.  Almost put his eye out once, doing a legdrop though a table.