I won an award! 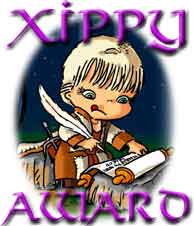 Disclaimer: Part Two: Lyrics to the song, "Because You Loved Me" aren’t mine either. They belong to that wonderful songbird, Celine Dion. And of course, whoever has a stake in her. You lucky devils.

Because You Loved Me
by: Katelin B.

Gabrielle dismissed the royal guards who had been escorting her, and entered the empty hut. The aged Amazon Queen didn’t notice the silence of her quarters as she had in the past few days of constant pain. Until now, it had seemed like a bad dream, a haunting nightmare that she couldn’t wake up from. But the ceremony had driven the reality of everything home. Xena, her life partner, and soulmate of the last thirty winters, was gone.

Running a withered hand through gray streaked hair, Gabrielle wondered, yet again, why. Xena’s death had been senseless. A stupid accident that wouldn’t have happened on any other day. If only it hadn’t been storming. If only Xena hadn’t gone to check on the horses. If only the lightening hadn’t flashed when it did.

But all those things had happened. And the lightening, coupled with Xena’s sudden appearance, had frightened the corral full of horses into stampeding. Right toward the warrior princess. Everyone guessed she had been too surprised or too old to move quickly enough, but whatever the reason, the outcome was the same. Xena was trampled.

Twenty sets of hooves had left the, once powerful, woman a battered and bloody mess, hanging onto life by the merest of threads. The village had roared with activity as every woman, warrior and child alike, were called to assist the Queen’s consort.

Gabrielle had rushed out in the rain, wearing nothing but one of Xena’s shifts, and was immediately guided into the healer’s hut by Ephiny, right behind her injured mate. And there she stayed. For three days, while the storm howled outside the rickety walls, Xena hung on, and Gabrielle stayed by her side.

For a while, Xena seemed to improve, and even Mira, the healer, was hopeful. But then the fever started, and Xena’s body was just too weak to fight it. Gabrielle had known then that it was the end, but stubbornly refused to accept it, faithfully applying cool compresses even long after the warrior’s heated flesh turned cold. And not once did a single tear fall.

Now, alone in the hut she had shared for so many winters with her mate, the aging Queen wondered why she couldn’t cry for her loss. She looked around the room, noticing nothing changed from the night she had left, so long ago, it seemed. Then her eyes caught sight of something new. A scroll, weathered and dry with age, sitting on the table that hadn’t been there before.

Something deep inside prodded Gabrielle forward, and she reached out, lightly running her fingers over the wax seal, deeply imprinted with a stylized X. A practiced flick of her wrist and the wax popped off, letting the parchment unroll.

Gabrielle’s knees turned to water as she laid eyes on Xena’s uneven scrawl. She tenderly lifted the parchment with trembling hands and walked over to the bed they had shared, seating herself carefully before daring to look at the words. As she read, her eyes began to mist. And finally, alone in the silence of her empty hut, Gabrielle started to cry.

You’re sleeping in our bed as I write these words. I pray to the Gods that you won’t read them for many winters. There was a time when I longed for death, believing in my heart that an eternity in Tartarus was my destiny.

But that was before I met you. Before your pure light forced away the darkness within me. Before I realized there was still a chance for my soul because half of it belonged to you. Before I loved you.

I’m glad we decided to live with the Amazons. It fills me with joy to see you so happy. Every time I see your smile, I’m reminded that I made the best choice. Giving up the road after ten long winters of redemption, to come home and make you my wife.

You know words aren’t easy for me. That talent you possess is not one of my many skills. So I’m giving this parchment to Ephiny, on the condition that it waiting in our hut after my funeral, so that in a way, you won’t be so alone. And you’ll know, finally, what I’ve wanted to tell you for so long, but never had the gift that would let me tell you with words.

For so long, everyone around us, even the Amazons praised my ability to keep going. To overcome impossible odds. To fight for the greater good, no matter what the personal cost. The keep striving to make the world a better place for the next generation, even when I was sure Tartarus was waiting for me. Everyone was stunned by my fighting and power to do the most astonishing things. When they asked, "How do you do that?" I always answered the same way.

"I have many skills."

But that wasn’t true. Every time I said those words, I was thinking of something else. Something that I wanted to scream from the heights of Mount Olympus, but just didn’t have the courage to say, even after we were married by Ephiny. I did all those things for you, my beloved Gabrielle. And you alone.