Palin Majere is the middle child of Caramon and Tika Majere. He has two older brothers, Tanin and Sturm, and two younger sisters, Laura and Dezra. He was named after the god Paladine. Palin is quite innovative and loves his brothers very much. He is also very proud of his magical abilities. His parents always diapproved of him becoming a wizard because they feared he would suffer a fate similar to that of his long-lost uncle, the powerful archmage Raistlin Majere. Palin's early life as a mage was extremely hard. His father, Caramon, almost prevented him from entering mage school because of lingering thoughts of his brother, Raistlin. Then he forced Palin to choose the White Robes. Also Palin had to live with the shadow of his uncle, Raistlin Majere, constantly over him. No-one would apprentice him due to this. Knowing the Caramon would not allow Palin to take The Test, Dalamar secretly tricked them into thinking Palin was needed at Wayreth. Then Dalamar secretly, without even Palin's knowing, he was given The Test and passed. Something odd happened, Dalamar had somehow involved Raistlin, who was supposedly imprisoned in the Abyss, in Palin's test. After the Test was over a minion gave Palin the Staff of Magius as a gift from Raistlin, the staff had been kept in the tower laboratory in the 25 years since Raistlin's apparent "death". Palin's brothers later became Knights of Solamnia, and he became their squire to help them in combat. Unfortunately, his brothers were killed in battle. Palin Majere is now the most poweful Wizard on Krynn.

Palin was captured by his cousin Steel Brightbalde, who was an evil Knight of Takhisis. Following the orders of his superiors, Steel took Palin to the Tower of High Sorcery in Palanthus and forced him to enter the Abyss in search of Raistlin. Palin found his uncle and brought him back to Krynn just in time to help fight the Chaos War. Palin also met Raistlin's "daughter" Usha (it has not been proven that Usha is Raistlin's daughter, it is only rumors that say she is his daughter) and fell in love with Her. In the Chaos War, Palin was able to help destroy Chaos by casting a powerful light spell, blinding Chaos while others tried to capture blood from Chaos. It is rumored that even the great Magius himself was unable to cast the spell. After the loss of magic in Krynn, Palin became the Master of the Tower of Wayreth, and leads a group of fighters against the Dragon Overlords. He became one of Krynn's greatest heroes for his part in the defeat of Chaos. 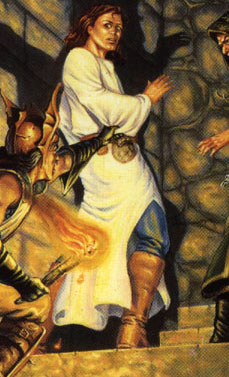 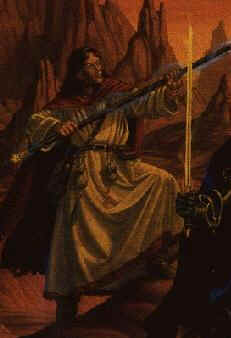