The News Bulletin of American Samoa, Monday, May 26, 1969 recorded the return of the Apollo 10 astronauts to Earth in this way.

Apollo 10 blazed its way across the South Pacific skies this morning to a letter perfect landing 340 miles east of Tutuila, ending the most successful space flight in history.

Hundreds of local residents lined the southern coast and got fleeting glimpses of the blazing space craft as it re-entered the earth's atmosphere. The view would have been perfect except for a scattered cloud cover. The bright red streak caused by the fire which enveloped the capsule could be seen only when it shot across open spaces in the clouds.

Sid Hill, who lives on an elevated area in the Western District, probably had the best view of it. He said the clouds did little to obstruct his view. He estimated it was at an altitude of about 3,000 feet and about 40 miles from Tutuila. He said an aircraft was visible near the track of the capsule. United Press International carried a report from the Space Center in Houston when the airplane first sighted Apollo 10.

Minutes later its parachutes opened and the Apollo 10 was visible to the crew of the rescue ship, the USS Carrier Princeton. The perfect splashdown came right on schedule at 5:52 a.m.

Even as the space craft hit the ocean, which was calm with gentle swells, helicopters from the Princeton, about three miles from the splashdown, hovered ready to pick up the astronauts.

"Hello, Recovery," said Astronaut Thomas Stafford. "We told you we would be right on the spot...how far did we miss it?"

"You won your bet," Recovery answered.

Moments after the splashdown the hatch of the space vehicle was opened as swimmers left the helicopters and attached a floatation collar around it. One by one the astronauts left it and entered a raft, but moments later were plucked from the raft and lifted to a helicopter.

And at 6:34 a.m.the three space travelers stepped onto the deck of the Princeton. For the first time in the history of space travel they were cleanly shaven. They had performed a "first" by shaving last night.

The Princeton immediately began steaming toward Tutuila. It will be in helicopter range this afternoon and the astronauts will fly by chopper to Tafuna airport for a big but brief welcoming ceremony at about 4:00 p.m.

The first helicopter to the reach the airport will be carrying four newsmen who will give the event worldwide coverage. Special communications equipment has been installed at the airport so they can broadcast and file their stories.

One of the astronauts will be in the next three helicopters to arrive at the airport.

They then will pass through a short receiving line and mount a high platform and the Governor will welcome them briefly. Each astronaut will respond briefly and then they will board a plane for a 13 hour non-stop flight to the Space Center in Houston where physical examinations which began this morning on the Princeton will continue.

The Apollo 10 was a rehearsal for the Apollo 11 mission which will come in July and which will be aimed at placing two astronauts on the moon. During the time Apollo 10 orbited the moon Stafford and Astronaut Gene Cernan left the main space ship and hovered within 50,000 feet of the lunar surface in a moon lander. Data gathered during the mission will guide the Apollo 11 astronauts to the moon itself."

Below are two photographs taken during the visit of the Apollo 10 astronauts. The first shows the astronauts posing with then Governor Owen S. Aspinall and Mrs. Aspinall. The second picture shows Samoan dignataries (from right to left, Chiefs Salanoa, LeFiti, and Mauga), Navy Officers, and Samoan beauties during the welcoming ceremony for the astronauts. The photographs are official NASA photographs in the LeFiti family collection and are presented here through their courtesy. 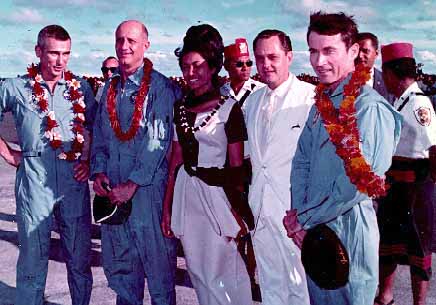 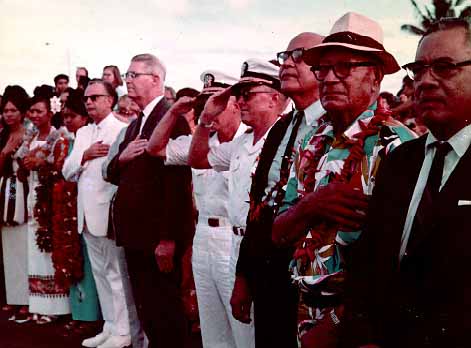 The next day the News Bulletin of American Samoa, Tuesday May 27, 1969, reported the arrival and departure of the astronauts to and from American Samoa as follows.

The Apollo 10 astronauts reached Houston this morning following a non- stop flight from Tafuna Airport and made good use of the dozens of leis and ulas they received here yesterday.

United Press International reported that as soon as they left their Air Force jet Space Travelers Thomas Stafford, John Young and Eugene Cernan rushed to their families and began hanging the leis and ulas on the necks of their children.

It was a fitting homecoming for the three astronauts following the most successful space flight in history which was a dress rehearsal for the Apollo 11 mission which will attempt to land two men on the moon in July.

Yesterday's colorful reception at Tafuna Airport was as successful as the moon flight and the three astronauts clearly were captivated by Samoan hospitality.

Three helicopters bearing the space travelers and a fourth carrying newsmen landed at 4:10 p.m., just about on schedule. By that time the crowd at the airport filled the lawn in front of the airport building, and spilled over onto the runway. A Pan American plane enroute to New Zealand was delayed and its passangers joined the crowd.

Governor and Mrs. Owen S. Aspinall greeted Stafford who dismounted from the first helicopter. Jim Lee of the Maintenance and Operations Divison marked the spot where each astronaut touched earth and brass plaques will be mounted in the runway to mark them permanently.

The Govenor then made good on his promise which had been radioed to the astronauts while they were enroute from the moon Sunday. He led them across the runway for a performance of Polynesian dances and a brief show by Loleni Talo, a fire dancer from Se'etaga.

The astronauts, who appeared a bit tired but happy, were clearly enjoying themselves. Mrs. Wanda Miles, the Governors's secreatary and one of the dancers, came forward and placed leis on the astronauts and kissed them. Cernan got in some horseplay by waving to the others and pretending to follow Mrs. Miles as she returned to the dancers.

The Governor then escorted the three space travelers to the platform which was decorated with tapa and torch ginger and the Fagasa band played the National Anthem and Amerika Samoa.

He then told the astronauts that the people of American Samoa, whose prayers had been with them during their eight-day moon trip, were thankful for the successful return to the earth.

Stafford said that the moon voyage was the result of a team effort by half a million people. He called Young and Cernan the two greatest pilots in the world.

He praised American Samoa's natural beauties and looked to the mountains rising greenly in the background and said, "I don't know why we want to go to the moon...or anywhere except here."

Cernan also had a word for the landscape.

'We spent three days orbiting the moon and looking at crater after crater,' he said. "I can tell you that the moon is never going to be a second American Samoa."

The Governor then escorted the astronauts through the receiving line. His gifts to the visitors were two-foot paopaos and desk nameplates decorated with Samoan fales and miniture palm trees. The group then moved to the Air Force jet which was waiting to fly the astronauts to Houston. The three got in some more horseplay by waving up to the plane's crew and pretending that they were to remain in American Samoa. Throughout the welcoming ceremony a pale, almost transparent half moon which Stafford and Cernan had approached to within 50,000 feet during their moon lander flight hung over the airport.