Reentry required the unusual step of undocking the lunar module, which had been retained for the flight back to Earth, in addition to the separation of the damaged service module. The lunar module had remained attached to the spacecraft to preserve the maximum electrical power in the command module for entry. The reentry was similar to previous flights and landing occurred at 142:54:41 at 21°38'24"S latitude and 165° 21'42"W longitude. The landing was within sight of the recovery ship, Iwo Jima, and the crew were on board within 45 minutes.

After their recovery they headed to American Samoa for a brief stop before they flew to Hawaii.

The 1970 American Samoa Annual Report to the Secretary of the Interior, that describes the events of that day and the next as follows.

“The return of the Apollo 13 crew to American Samoa following their splashdown on April 17 made Pago Pago the dateline for the world’s top news story. About 25 correspondents for wire services, newspapers, radio and television networks rushed to the territory to cover the arrival. Flag Day was celebrated on the day of the splashdown, marking the 70th anniversary of the raising of the Stars and Stripes on Tutuila. Many of the correpsondents had arrived early and filed stories on the colorful ceremony. One television network made a Flag Day documentary film which was shown to a large viewing audience.

The astronauts arrived by helicopter on April 18, enroute to Honolulu and a meeting with President Nixon. They were welcomed by thousands of Samoans [as well as then Govenor John M. Haydon] and the newsmen sent out thousands of words of copy which was handled by the Office of Communications without one delay.”

In a letter dated April 20, 1970, Govenor Haydon summed up the visit of the Apollo 13 astronauts as follows,

We just concluded celebrating our 70th celebration of Flag Day and it turned out to be the largest in the history of American Samoa. On top of that, the three astronauts popped in unexpectedly and this created an even greater celebration. It certainly was a thrill to meet them and a very exciting occasion for everybody. About three or four thousand people turned up almost instantly at the airport, along with dancing and singing groups, and about 30 newspaper men from all over the world who managed to find their way into here almost overnight. About 20 of them are still here. We had them up for cocktails yesterday afternoon.

Below is a photograph from the 1970 American Samoa Annual Report to the Secretary of the Interior, (U.S. Government Printing Office) showing Governor Haydon greeting the Astronauts. The caption with the photograph reads "The Apollo 13 astronauts landed in American Samoa and Governor John M. Haydon displayed a newspaper headline to convince them they were safely home." Also below is a photograph of the Governor's house, a National Historic Landmark, known as "Government House," where the cocktail party referred to above was held. 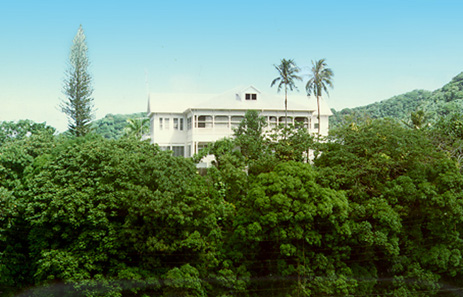 Click on any of the photographs below for a larger image.

Apollo 13 Astronauts Lovell and Swigert are Greeted by Samoans.

An Ula (or Lei) is Given to Haise.

Govenor Haydon Give a Gift to Swigert.