View of Blomidon Peninsula from the Grand-Pre area.

On the southwest coast of Nova Scotia hugging the Bay of Fundy lies a continues range of highlands known as North Mountain. To the south about mid point of this mountain range is the Digby Gut or simply known as the "Gut" whose center is the Annapolis / Digby county boundary line. The "Gut" is the narrow entry used by Champlain, LaTour and d'Aulnay along with the invading forces to enter the Annapolis Basin and attack Port Royal.

Across the "Gut" and to the south North Mountain continues. Here we have Digby Neck and another cut in the range where the Bay of Fundy flows into Baie Ste.-Marie...this cut is known as “Petit Passage” ( Little Passage). As we continue south we are now on another island of this mountain range...Long Island and we are now on the opposite side of Baie Ste.-Marie and Clare...La Ville Franēaise.Still further south yet another cut...this one known as “Grand Passage” (Large or Long Passage) and onto Brier Island at the very southern tip of the mountain range and the stumping grounds of some of our protected whales.

In the opposite direction...at the northern end of North Mountain in Kings County we have an incredible piece of highland extending into the Bay of Fundy known as the Blomidon Peninsula. At the very tip of the peninsula are ancient rock formations and due to their shapes and natural splits have given the name of this location as "Cape Split".

Blomidon Peninsula has become synonymous as a geographical background icon when depicting the Grand-Pre area Acadians being loaded aboard the waiting transports at nearby Gasperaux River. It is a magnificent and beautiful sight to see...however...it is also a very sad and heart breaking reminder of want happened many years ago. To so many this was the last memorable land mark they would be seeing of their so loved Grand-Pre, Riviere-aux-Canards, Riviere-des-Habitants, Saint-Charles-des-Mines...of their Acadie.

For those visiting Grand-Pre a drive to the “Look Off” at Blomidon is well worth the time. On route you will experience driving up a mountain face and the view of the Grand-Pre area from this unobscured elevation in nothing short of spectacular and I have as yet not seen a photo do this scenic view justice.

Long before Cape Split became a popular tourist attraction and marked trails were established we would trek from Scot Bay using want old trails were available...along with a map and compass and go and set up a base camp on the rocky shore not far from “the Split”. On route with full packs we would have to needle the narrow three foot or so trail with thick under brush and trees on one side and the vertical 100 foot plus cliff drop on the other side...then finally rappel down a location known as “Killer Hill” to the beach stone shore line.

Please join me on one of those treks...Blomidon...a geographical part of our Acadian history few get the opportunity to visit... 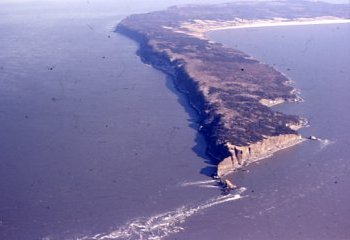 Blomidon Peninsula and Cape Split...
To the right Scot Bay and to the left...Grand-Pre Note the white water at Cape Split...
an indicator of the extremely strong tidal current... 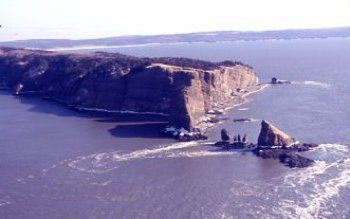 The high rock face which we would follow...
and at the base we would set up a base camp
behind the "Nessie" shaped rock formation seen at the upper right... 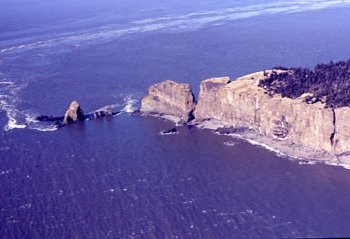 Then calculating time...tides...and possible fog we would trek to here...
the very tip of the peninsula...Cape Split... 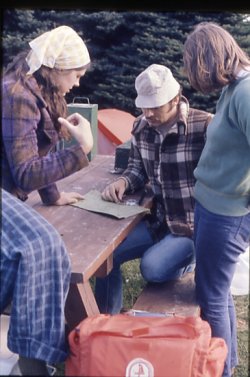 Looking at a topographical map as to which route we would be taking on this trek...
P. Spike who took the above photos is the individual in the center... 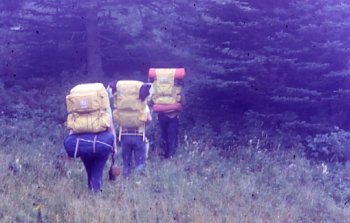 A decision having been made...we head out... 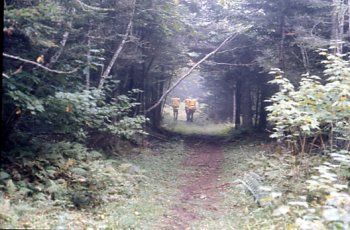 Soon we cross link with a nice trail... 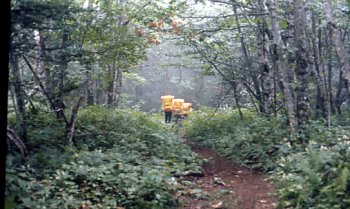 But it's short lived and quickly turns more rustic... 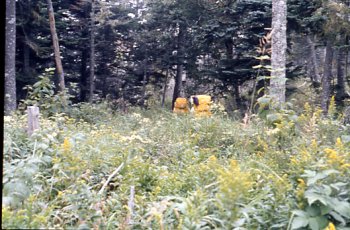 Then it vanishes altogether... 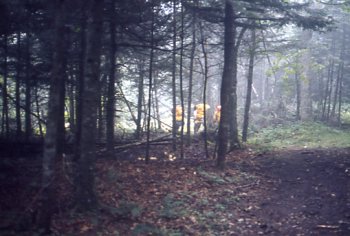 Using our compass we take a bearing towards another old trail... 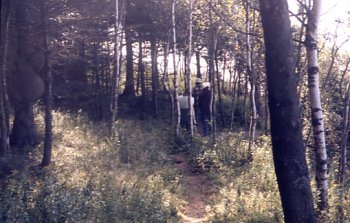 This one will take us to the edge...the vertical rock face wall of Blomidon Peninsula... 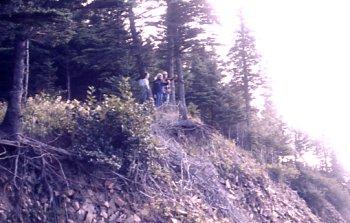 "Widow Maker Pass"...part of the trail where you had to needle between
the trees and under brush and the almost vertical drop
to the rocky shore over 300 feet down... 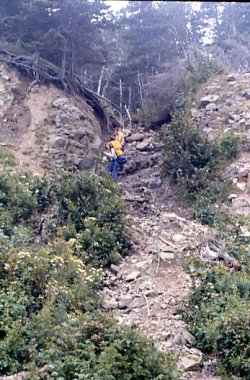 "Killer Hill"...the last obstacle before we reach our base camp destination... 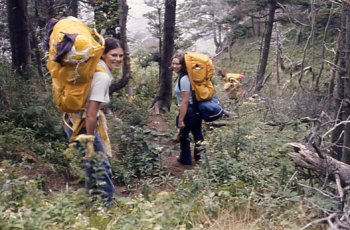 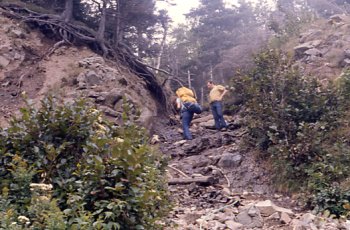 But with 45 to 50 lbs. backpacks and wet slippery rocks every step is calculated... 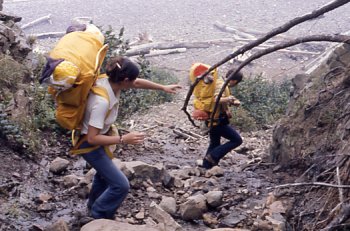 As seen in this shot...the water flows freely over the rocks we have to walk on...
In this case we used a simple rappel method to safely make our way down ... 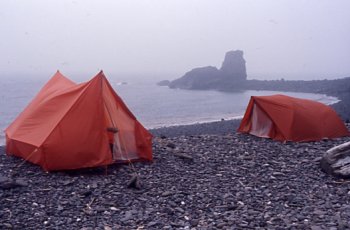 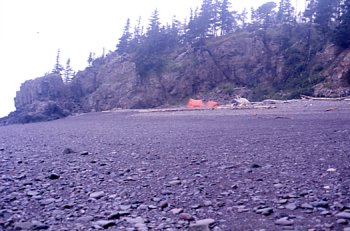 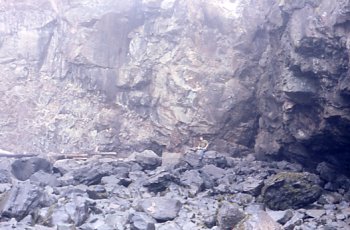 The incredible rock formations...
There's a person in this picture...can you see him ? 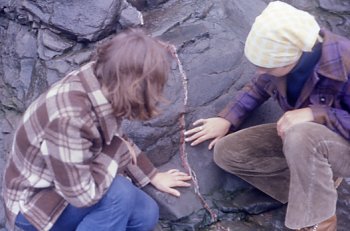 Looking at an interesting vein in the rocks...
This location is well known for it's beautiful agate and amethyst... 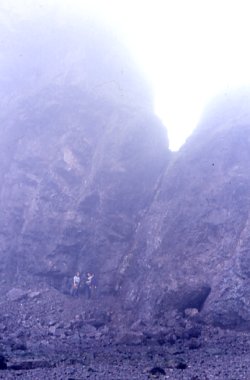 With the tide going down we start our countdown...
and head out towards the "Split"... So many beautiful and interesting things to see...
but it's critical we keep track of our time and location
so as not to get caught by the tide... 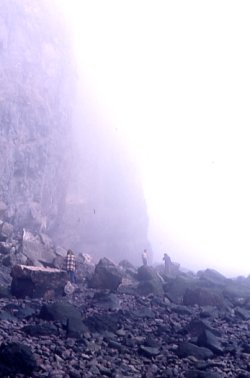 The fog suddenly begins to roll in...
A situation which can turn critical and must be taken into consideration
when planning a shore line trek at a location such as this... 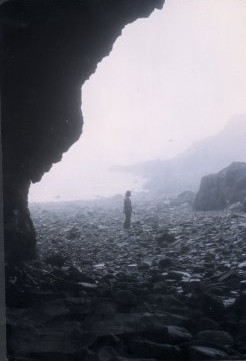 A shot of the shore from inside one of the crevice in the rock face... 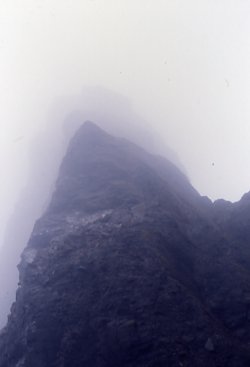 Looking up at one of the monolith rock sentinels as it disappears into the fog... 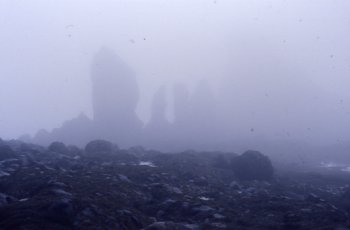 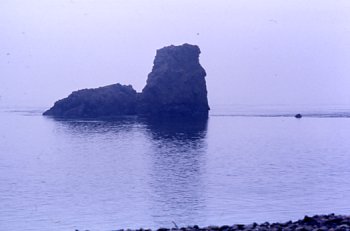 On the return the fog lifts and we see "Nessie"... 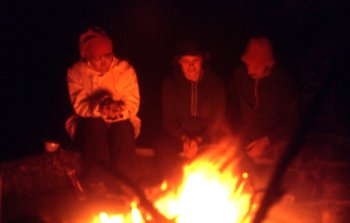 The cool evening air rolls in... 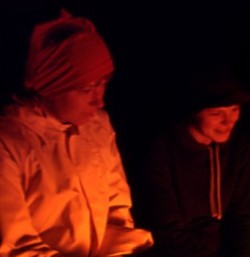 And time to tell tales of past treks and talk about new locations to go explore...

All the photos above were taken by me unless otherwise noted...