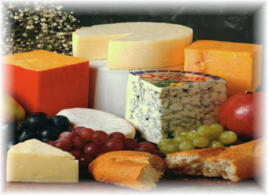 BLUE
There are two major types of Blue cheese: soft/white - mild, with a sweet taste of herbs and firm/hard - crusty outside with a sharp, tangy taste and smell . Blue cheese has a veined appearance within a white interior. This cheese ripens from the center to the crust. It is desirable that the veins be dispersed evenly throughout the cheese. Blue cheese continues maturing briefly after being made; therefore, when storing this cheese, any cut surfaces should be covered and a small opening should be left at the rind so the cheese is able to breathe.

BRICK
Brick is a mild, but also pungent, sweet tasting cheese. It is a semi-soft cheese that slices well without crumbling. Brick has a reddish-brown rind and its inside is yellow-white in color with many small holes. This cheese is said to be named for its brick-like shape.

BRIE
Brie has a delicate and creamy texture and its rich, sweet taste can vary from buttery to mushroomy. This cheese has a thin, edible crust and becomes even more delicious with age, tasting best when served at room temperature Brie was first made in France and is usually made from cow's milk. Its quality depends upon what milk (whole or skim) is used..

CAMEMBERT
Camembert has a soft texture with a buttery taste and mushroomy smell. It tastes best when it's at room temperature and the center becomes soft.

CHEDDAR
Cheddar can have a diverse selection of tastes that range from mild to sharp. This is dependent upon the age of the cheese.
Mild Cheddar is perfect for sandwiches because it has a mellow balance of flavors.
Sharp Cheddar is great for cooking because its flavor is released when heated and it shreds well. This cheese tastes best when it reaches room temperature before eating and also blends very well with other cheeses.

COLBY
Colby is similar to Cheddar, but it is a softer, milder cheese that contains more moisture and has a shorter curing process. Colby has a mild and slightly sweet taste, but it can also be sharp and tangy.

EDAM
Edam is a semi-soft to hard cheese that is similar to Gouda in its mild and buttery to nutty taste. It has a firm, crumbly texture that is free of holes. In the United States, Edam is covered with a tight red wax coating.

FETA
Feta is a soft, sharp and salty, crumbly cheese containing small holes. Since it is ripened and stored in brine (water saturated with salt) it is called "pickled" cheese. Feta also has a low fat content.

GOUDA
Gouda is a semi-soft to hard cured cheese that becomes spicier and more robust as it ages. It is similar to Edam in its mild and nutty to buttery taste, but Gouda is aged longer and has a richer flavor.

MONTEREY JACK
Monterey Jack is a member of the Cheddar family and is a mild, white cheese aged only three to six weeks. The texture of Monterey Jack cheese depends on the type of milk used. If whole milk is used, the cheese will be semi-soft; if skim milk is used, it will be harder and can be used for grating.

MOZZARELLA
Mozzarella has a mild, milky taste and is more of a cooking cheese than a cheese board cheese due to its good binding properties, moist texture, and ability to melt. It is a "stretched-cured" cheese meaning that during the manufacturing process the curd is pulled, kneaded and shaped while it is still pliable. Therefore, it absorbs the flavors and juices of the ingredients surrounding it and is perfectly designed for cooking. Mozzarella is also low in fat; therefore, it is ideal to use even when dieting.

MUENSTER
Muenster is a semi-soft, mild cheese that has an almost a sweet flavor. It usually has an orange-yellow rind with a straw-yellow color inside and is produced in a loaf shape.

PARMESAN
Parmesan is a hard, grainy textured cheese varying in shape and size. It's used mainly as a grating cheese on many different types of foods and is a good cooking cheese because it does not form threads as it melts. Parmesan cheese will keep for years when it's whole and will continue improving with age. In the United States, this cheese is produced primarily in Michigan and Wisconsin.

PROVOLONE
Provolone is usually a smoked cheese, ranging in flavor from mild to sharp, with a smooth texture. The mild ones are younger and used as table cheeses. The sharp ones are older and harder; therefore, used in cooking. Traditionally, it is pear-shaped and bound by cord.

SWISS
Swiss cheese, which is also known as Emmentaler or Schweizer, is a firm cheese with a sweet, mildly nutty flavor. This cheese is known for the holes that develop as it ripens. These holes or eyes range in diameter from 1/2 inch to 1 inch and begin forming when the cheese is about 3 weeks old.