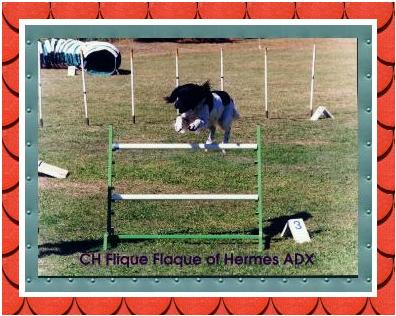 AGILITY WITH THE LARGE MUNSTERLANDER

CH Flique Flaque of Hermes ADX opened the door for us in agility and although she is now no longer with us she is constantly remembered in NZ Agility circles. Her daughter Java (CH Hermes Java Golightly ADX) has also left us, but again she gave us something to work with in her son CH Hermes Kitewing Slate.


Our UK import (NZCH Raycris Lexi's Special AD) competes with great gusto and has had some very big wins - including a Novice win at the 2006 Northern Classic winning over nearly 200 dogs. Her lightning fast responses and hoony attitude and have endeared her to many and unfortunately she has not competed much in 2007 with 2 failed AI's and she now sits on the couch next to me very tubby with her unborn babies from the Max mating.

Lexi's daughter, Hermes Chilipepper Kiedis has only been competing regularly this year and once she got over a phobia of the weaves - there is no stopping her. Her first clear round resulted in a win - and she's now got those weaves beastied!!!! This past weekend from 6 runs (Dec 07), she had 4 clear rounds and 2 top 5 placings....she's going places this one! She'll have a bit of a break after the initial Jan 2008 shows so I can finish her breed title in Feb.


Java's son Slate (CH Hermes Kitewing Slate) has had many runs and now stands with well over 100crc's and loads of sashes. He is nicknamed "The Pony" for a reason - he is very very big. He struggles in tunnels - especially collaspible tunnels. Doesn't stop him picking up ribbons when the course has long straights. His stride has to be seen to be believed.


To date, Flick had well over 100 clear round certificates, Java had just hit the 100 mark, and Lexi has 118, Slate 124 and Kiedis in her short career 12. We have a wicker clothes basket chocker full of sashes and ribbons - no room for anymore - so it is either a bigger basket or another one!


Since her agility career started early in 1996, Flick has competed through the lower ranks of Starters & Novice to gain entry into the Intermediate & Senior classes. She promoted herself into Seniors by gaining her ADX title (Agility Dog Excellent) - the first Large Munsterlander to do so. Until late in 1988 she was the ONLY Large Munsterlander in the World to have achieved this.

As of December 2007, Lexi competes at Novice / Intermediate level. 1 more Novice win or 1 more AD clear will take her through to Senior.

Slate and Kiedis both compete at Starters/Novice level.

There is no bigger thrill than watching your course time remain in the top five of a hundred or so dogs, knowing that you are going to take home another lovely sash to pin on the brag wall! To date we have filled two walls in the 'trophy room' and have started on the third! Having said that, winning or placing isn't everything and whether you do well or have a shocking round, you still have a great time doing it!

As anyone with a Large Munsterlander will tell you, they are bored stiff by repetition - and agility training is no different! The beauty of training for agility is you can work on a 'module' of obstacles for a little while, then go and do a different set without the dog switching off. Munsterlanders have so much energy, you find yourself in a heap on the ground gasping and the dog is looking down at you in disgust as if to say, "Come on you lazy blob - I ain't finished!"

Since 2001 I have been an agility judge and I love it. It has also helped my handling as I can see what other handlers do that I wouldn't think of doing it.

Saying that, I still prefer to run my dogs ...hard and fast. I figure why put in a blind cross, back cross, forward cross...or any other kind of cross or pivot..if you can just run hard! 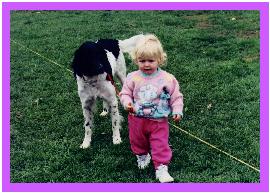 Flick with Ally Shrimpton going for a wander!

Showing that I'm not entirely happy with a 2nd placing!


Other Agility pages of interest