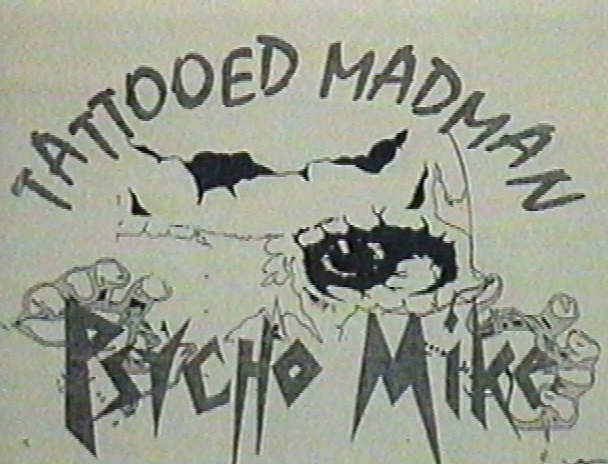 PSYCHO MIKE STARTED HIS CAREER IN 1981.AFTER COMPLETING TRAINING AT THE JOHNNY POWERS SCHOOL OF WRESTLING,DEBUTING MAY 3,1981 AGAINST THE MASKED SUPERSTAR.
BEGINNING HIS WRESTLING CAREER AS A MASKED WRESTLER CALLING HIMSELF "MR. PSYCHO" BEGAN FEUDING WITH THE DEMON OF DARKNESS AND THE ORIGINAL SHEIK.EARLY IN HIS CAREER SPILLING BLOOD THROUGH-OUT THESE FEUDS,

PSYCHO MIKE HAS WRESTLED IN NUMEROUS INDEPENDENT PROMOTIONS THROUGH-OUT HIS CAREER SUCH AS: I.W.A. , MICHIGAN CHAMPIONSHIP WRESTLING ,G.L.W.A.(Oh.) ,U.S.W.L. ,C.W.A. ,E.S.C.W. ,CLEVELAND ALL PRO,A.C.W. AND MASTERZ OF MAYHEM, AND OTHER SMALL INDEPENDENT PROMOTIONS,
HOLDING QUITE A FEW CHAMPIONSHIPS ALONG THE WAY,AS WELL AS WRESTLING FOR THE WORLD WRESTLING FEDERATION TV TAPINGS IN EARLY 1985-86 WHEN THE WWF TAPINGS WERE ONLY HELD AT MID-HUDSON CIVIC CENTER IN POUGHKEEPSIE NEW YORK,
WRESTLING NAMES SUCH AS S.D. JONES,PAUL ROMA,PAUL "MR.WONDERFUL" ORNDORF AND JAKE "THE SNAKE"ROBERTS. 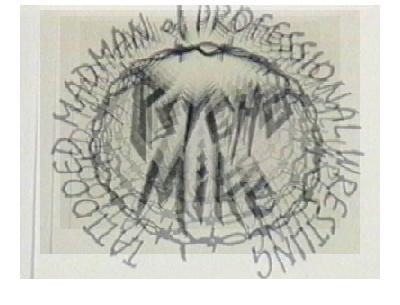 PSYCHO MIKE IS KNOWN AS "THE TATTOO'D MADMAN" DUE TO THE FACT THAT HIS ARMS ARE 95% TATTOO SLEEVES AND LEGS ARE TATTOO'D HEAVILY AS WELL.
SOME OF HIS TATTOOS ARE OF:
BART SIMPSON,TAZ,SKULLS,DRAGONS( A Great GEISHA/SAMURAI/DRAGON On Left Back Calve),TRIBAL DESIGN PRINTS,(BIOHAZARD Symbols,
MOTLEY CRUE(Dr. Feelgood Snake),
A SCORPION ON LEFT RING FINGER,AS WELL AS AUTOGRAPHED PORTRAITS OF
GENE SIMMONS FROM THE ROCK GROUP KISS, HEAD PRINT ON HIS RT. ARM AND Gene Simmons. FROM DESTROYER ALBUM ON LEFT LEG (THIGH),& CLASSIC PORTRAIT FROM KISS ALIVE 1 ERA ON RT.CALVE,
AND ALL FOUR BAND MEMBERS FACES (SYMBOLS) FROM INSIDE PSYCHO CIRCUS COMIX ,ON THE BACK OF HIS NECK,JUST TO NAME A FEW TATTOOS. 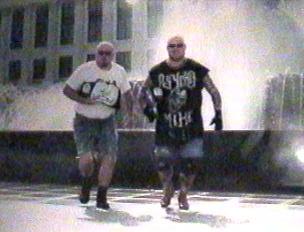 STORY OF THEATRE OF PAIN....
PsYcHo MiKe & G-MOE STARTED TAG-TEAMING IN LATE 1996,AND BY 1997 HAD BECOME TAG-TEAM CHAMPIONS WHO OBILTERATED ALL TEAMS THAT FACED THEM.
KNOWN FOR THEIR HARDCORE STYLE ,
THE THEATRE OF PAIN NAME COMES FROM A MOTLEY CRUE ALBUM OF THE SAME NAME.
G-MOE AND PSYCHO MIKE DISBANDED IN EARLY 98 ONLY TO REFORM AGAIN IN EARLY 99...
BRINGING IT'S BRAND OF VIOLENCE TO A WHOLE NEW PINNACLE.
TAG-TEAM WRESTLING WILL NEVER BE THE SAME AS LONG AS THE THEATRE OF PAIN IS ON THE SCENE....
AS OF THE YEAR 2000 THEATRE OF PAIN HAS BEEN LAID TO REST.....
NOW BACK TOGETHER IN 2005 REEKING IT'S BRAND OF HAVOC!
NOW IS PRO WRESTLING'S ONLY UNDEFEATED TAG-TEAM! 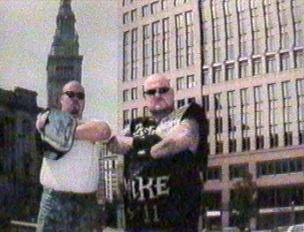 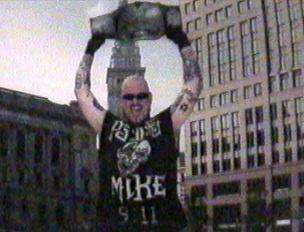 Here Is Some Interview/Story w/PsYcHo MiKe
____________________________________________ The Kilt Report #165 Wednesday,February 24,1999
Q U E S T I O N S F O R T H E P R O S
TKR: Whats your real name, and what gimmicks have/do you use?
MIKE: Mike Brown - Arm & Leg Sleeve Tattoos(Tattoo'd Madman of professional wrestling).PsYcHo MiKe
TKR: What height/weight are you?
MIKE: 6"1', 282 lbs.
TKR: What circuits do you currently wrestle in?
MIKE: Ohio, PA, Michigan, New York.
TKR: What titles have you held?
MIKE: Many independent titles, Great Lakes, Euclid Ohio-North American Champion 88-90, A.C.W. Heavyweight Champion, CWA Heavyweight & Tag Team Titles, New Era Heavyweight Champion, IWA(Youngstown, Ohio) Tag Team Champion, currently USWA(Ohio) Tag Team Champion, Masterz of Mayhem Heavyweight Champion, Cleveland All Pro North  American Champ.
TKR: When did you decide to become a wrestler?
MIKE: Age 9 or 10, when my mom took me to the matches. I remember: Bobo Brazil, The Love Brothers, Pampero Firpo & The Original Shiek vs Johnny Powers and Johnny Valentine.I've been hooked since!
TKR: And how did you get started?
MIKE: I was alone in my room and.. got started...OH you mean wrestling, I met Johnny Powers when I was 13, and talked to him about learning how to wrestle.
TKR: Who has been the biggest influence on your career?
MIKE: I was influenced by a few wrestlers which styles I still use: Buzz Sawyer, Original Shiek, Abdullah the Butcher and Ric Flair. TKR: What has been the greatest moment of your career?
MIKE: I have two:
1) Saving Jerry Lawler from an attack by Kamala & Original Shiek.
And 2) Going over on Abdullah the Butcher; also having him speak on TV after our match(first words on American TV in 20 years, I have the tape)
TKR: Who are/were you trained by? What kind of athletic background did you have before you became a wrestler?
MIKE: I went to Johnny Power's school of wrestling, with teachers: Johnny Powers, Tony Viccaro, Bad Bill Coleman and Jim Wittenburg; also another person, Bob Butler.,As for athletic background, AAU Jr. Olympic Boxing Champion 75, High School Wrestling State Champion 78.