The Great Northern War
Lewenhaupt in early 1708
Topic: Generals
Not a lot is known about Lewenhaupt's views on the situation as the main army drew closer in early 1708. It has often been assumed that he advocated a less ambitious plan, i.e. was opposed to a march on Moscow. Some insights can be gained from a volume in Tartu (EAA.278.2.86), which contains drafts of his outgoing orders during January. They show that he was in contact with persons close to Charles XII (for example Major Generaöl Meijerfelt). On 2 January 1708 Lewenhaupt wrote to the latter, stating that he believed the Russians would withdraw once the main army got closer. Interestingly Lewenhaupt claims that his own army is ready to march and would leave Courland if there only were supplies enough. Especially fodder was a problem as "our friends" the forces of Wisniowiecki and Sapieha had caused more damage than the enemy. If only Wisniowiecki still had been an enemy - then Lewenhaupt could march anywhere. If the Russians advanced Lewenhaupt would, he states, have no other choice than collect his forces and meet them despite the fact that he had fodder for just 3 days. If only the King would arrive and give the Courland army more room.
Posted by bengt_nilsson at 10:58 PM MEST
Share This Post


At present I am preparing an article on the clergyman and poet Samuel Älf (1727-1799), today perhaps best known for the large collection of Swedish poetry in Latin which he gifted to the Diocesan Library in Linköping. Without his lifelong efforts many of these works would likely have been lost. Älf naturally kept an extensive correspondence with scholars and public officials, of which at least a considerable number of incoming letters have been preserved in Linköping and in Uppsala. One example:

In late May 1790 Magdalena Stenbock (1744-1822), married to a member of the Cederhielm family, wrote to Älf about some books he had lent her. One of these "The Prince of Württemberg" (likely an edition of Bardili's work, first published in 1730) she had leafed through and found "the same things as in the histories of Charles XII: bravery, good intentions, a good heart, but no order, much stubbornness and vanity, which often results in misfortunes. Which we and he himself had to pay dearly for. If he had in time made peace with Poland and just disciplined our proud neighbour on the other side she would right now be less overbearing and we a formidable power. But -  what did not happen then will hopefully happen now. However, it would have been better to nip it in the bud and he had such an opportunity."

Magdalena Stenbock was of course referring to Russia and Gustav III's attempts to "discipline the proud neighbour" during the war of 1788-1790. 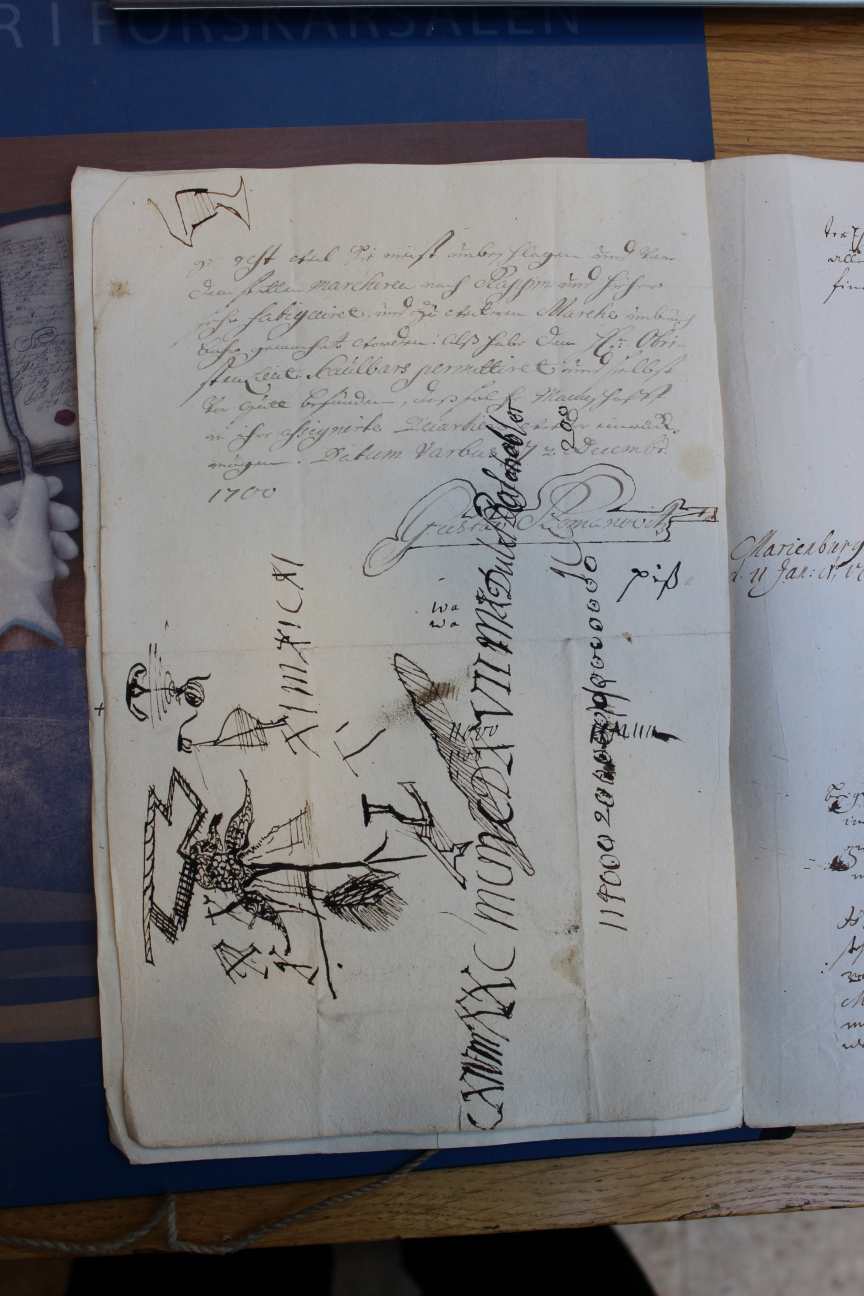 A report from London
Topic: Diplomacy


The Governor Generals of Livonia kept a fairly extensive correspondence with Swedish diplomats abroad and it went far beyond the area of immedia interest (Poland and Russia). A typical item from 1670:

On 30 December 1670 the Swedish envoy to London wrote to Claes Tott (1630-1674), one of the more illustrous men to hold the position (his grandfather had married a daughter of Erik XIV and Claes Tott had been one of Queen Christina's favourites). In his letter Leijonbergh reports on recent events. During Christmas the Court had spent the first day "with devotion", but the following days with comedies and other amusements. On the 29th Parliament had met. "Johan Coventry" (Sir John Coventry), who had had recently been attacked (on the 21st) had appeared before Parliament to show his wounds.

"Sir Edward Sprag" (Edward Spragge) was reportedly chasing 9 pirate ships from Algier. In the meantime money was being collected in London for ransoming English captives and the Archbishop of Canterbury (Gilbert Sheldon) had reportedly pledged 4,000 pound sterling.

At the Royal Exchange there was great unrest as a result of a large "Harzican" (Hurricane) near Barbados. 12 ships were reportedly missing.

"Mons. Bertue" (Charles Bertie), brother of the Earl of Lindsey, had been ordered to prepare for his journey to Denmark where he would serve as Envoy.


On 11 September 1701 Governor General Dahlbergh wrote a series of letters about the recent events in eastern Livonia, where a Russian force had attacked Col. Schlippenbachs corp. To the Chancery in Stockholm and Major General Horn in Narva Dahlbergh sent a brief account and expressed his concern for the future. To Charles XII he sent a longer letter, enclosing a report from Schlippenbach himself. The courier, Lt. Col. Stackelberg, had been present during the Russian attack and could expand on the subject if necessary. What was Dahlbergh's primary concern? Well, the supplies collected for the expected return of the King's army. The original plan had of course been to drive the Saxon army away from Riga and then at some point go back to eastern Livonia in order to prepare for an assault on Pskov. As late as 16 September Dahlbergh appears to have believed that this was still in the cards, although the lateness of the season made him believe that it would take a considerable time for the King's army to get there.

A couple of days later Dahlbergh was informed of a new decision. Charles XII had ordered two regiments (Fritz Wachtmeister's and Erich Stenbock's) to leave Mitau and join Schlippenbach's force along with 1,000 men from the garrison of Riga. When writing to the Chancery in Stockholm on 23 September the Governor General could add a bit of juicy gossip to this news: there had reportedly been a great uprising in Moscow. The German Quarter had been thoroughly plundered and a number of the Czar's favorites, including Anna Mons, killed.

The archive of the Estonian Governor General
Topic: Archives


When the last Swedish possessions in Estonia and Livonia were being threatened by the Russians in 1709-1710 some of the archives were evacuated. One of them was the archive of the Estonian Governor General. It stayed in Sweden for more than a decade. In 1726 or 1727 it came back to Estonia due to the regulations in the Treaty of Nystad. However, some parts were never handed over to the Russians. This means that some incoming letters to Governor General de la Gardie are in Riksarkivet (Livonica II, vol. 270-300) and others in Tartu (as far as the GNW is concerned vol. 1.2.284-291).

When one looks at the individual volumes in Tartu they are quite different. Vol. 284 (first half of 1700) consists of nearly 300 pages, while 291 (1704) is less than 100 pages (all heavily damaged by water). One of the few partly legible items in the latter volume is a letter from Adam Ludvig Lewenhaupt to de la Gardie, dated Mitau 24 September. Lewenhaupt writes of the remarkable successes of the troops under his command and the victory at Jacobstadt. With no more that 3,080 men he had soundly beaten the enemy which lost 5,000 men in dead and wounded (just after the battle Lewenhaupt claimed that 2,000 enemy soldiers had been killed).

In Livonica II there are a few more letters from Lewenhaupt to de la Gardie: 23 May, 6 June, 11 July and 14 September 1703 (all from Mitau). While it's very likely that Lewenhaupt did not write to de la Gardie as often as he did to Frölich in Riga one can safely assume that this means that many letters have been lost.

Fond 7349, op. 2 and 3
Topic: Archives
After several years of more or less intense work I am finally in the process of finishing those parts of the "Swedish archive" which have been added post-1908. Generally speaking they consist of a mixture of items, i.e. parts of various collections (most notably Carl Schirren's and manuscripts which once belonged to the Gesellschaft für Geschichte und Altertumskunde in Riga). So while Schirren, the Gesellschaft and others in the 19th century took advantage of the lack of interest in the archive of the Swedish Livonian Governor General by removing interesting volumes and documents subsequent generations have been doing the opposite. However, an old catalogue made in the 1810's (op. 3, vol. 86) suggest that some volumes have either been lost altogether or are yet to be returned. Whether this practice of "reconstruction" is advisable is another matter - it makes it rather difficult to check footnotes in older litterature.
Posted by bengt_nilsson at 10:38 PM CET
Share This Post

Czar Peter's visit to Riga in 1697
In 1892 Alexander Bergengrün published a study called Die grosse moskowitische Ambassade von 1697. It was primarily based on material preserved in Riga and on printed works, i.e. Bergengrün's access to Dahlbergh's letters to Stockholm was limited to the copies in the letterbooks. This meant that he never saw the attachments to the letters as those are never included. In 1962 Alvin Isberg published a study called Erik Dahlbergh och tsar Peters västeuropeiska resa. Isberg had the opposite problem - he used the material in Riksarkivet but not the material in Riga which formed the basis for Bergengrün's study. This resulted in some pecularities. Bergengrün used Dahlbergh's account in a printed French version (without the attachments), while Isberg used Dahlbergh's account with attachments in the version sent to Stockholm. Both of them missed one version, Bergengrün because it had been removed from the so called "Swedish archive" in Riga by Carl Schirren and Isberg apparently because he overlooked that it was preserved among the documents in Schirren's collection in Riksarkivet. This version is an edited draft, which gives the reader a chance to see how the original draft was changed before being sent to Charles XII.
Posted by bengt_nilsson at 10:43 PM CET
Updated: Tuesday, 1 March 2016 12:57 PM CET
Share This Post


There will be no regular update today, but I am (probably) back online next week.


In 1905 the French musicologist André Pirro wrote to Krigsarkivet in Stockholm, asking for information about Johann Jacob Bach's service in the Swedish army. According to Pirro the brother of Johann Sebastian had joined the Life Guards as a musician in about 1704, followed the army to Poltava where he was captured and then kept as a prisoner in Bender until he went to Stockholm in 1713. The staff at Krigsarkivet looked for Bach in the existing records of the Life Guards, but to no avail. Some of Pirro's information was obviously incorrect (a Swedish soldier captured at Poltava would not have ended up in Bender), but the main points may well be true. A note, until fairly recently overlooked by musicologists, in the journal of the clergyman Sven Agrell places Bach in Constantinople in the spring of 1710. Agrell writes that the gave communion on the 13 April and that among those present was a certain "Jacob Bach, an apprentice musician from Erfurt" who was staying with Lt. Col. Funck.

Another version of the Bach story appears in the Neue deutsche Biographie, where it is claimed that Bach joined the Life Guards in 1707. So what is the truth in all this. Well, perhaps Pirro and others after him have been looking in the wrong place. What if Bach served in another Swedish regiment? The year 1704, which goes back to a Bach manuscript often called "die Genealogie", seems entirely logical if it's only put in the proper context...