As the importance, not to mention sheer enjoyment, of Eden Ahbez' proto-psychedelic masterpiece Eden's Island opens ears and minds in ever wider circles, the reissues step forth. Righteous/Cherry Red in England have recently released what I think is the fourth repro, and it is the best one yet. Earlier repros have simply taken the original album for recycling, not bothering to add even the non-LP 45 side that clearly belongs to the Eden's Island sessions. A recent vinyl repro took the liberty to replace the classic, perfect 1960 sleeve with some yellow abomination that was neither modern nor retro, but simply wrong.

The current CD on the other hand retains the original front cover, and better yet, adds a whole bunch of vital bonus tracks. The 45 track ("Tobago"; actually an instrumental version of an LP number) is present, as are several other 45 (or even 78) tunes written by 'Ahbe', as his friends knew him. Bianchi & The Jungle Sex-Tet have 3 tracks from the Aphrodisia LP which are fun cocktail sipping music from the Atomic Age, and there is also a vocal surf tune with Eden himself.

But what really delighted me was the inclusion of Herb Jeffries' "Legend Of Nature Boy" suite in its entirety. Released around 1957, this is the only recording of Ahbez' complete suite, from which "Nature Boy" was pulled and made a hit for Nat King Cole in the late '40s. Jeffries fell in love with the spiritual depth of this smooth music, and arranged and recorded it with Richard Hazard's Orchestra for a self-financed release; an early private pressing in other words. This is not quite Exotica but big band crooner ballads with a serious, philosophical tone; not at all like Eden's Island yet quite psychedelic in its own way. In my Acid Archives and Psychedelia books I have written at length about Jeffries' LP, which the man even took care to reissue in the late 1970s. In addition to the musical and historical value, it is encouraging to see reissue labels do their homework and dig up contextual recordings of importance. Kudos to the producers. 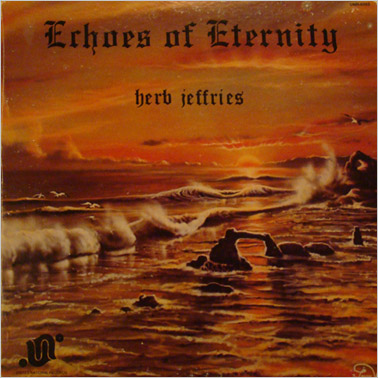 Second pressing from the late 1970s

With reference to Ahbez' oeouvre, it should be recognized that what we get on this CD is a selection, by no means complete. There are several more 45s and 78s featuring recordings of Eden's songs (I have one in my own quite small Ahbez collection), although I don't think there are any more discs with Eden himself present. If the Ahbe trip continues its victory tour around the world, it may be possible to envision a complete collection of all his compositions in their original recordings. Wouldn't that be something? In the meantime, pick up this excellent CD reissue from Righteous and dream the dream that dreamers dream.

PS if someone is working on a complete Ahbez discography featuring all his compositions, feel free to get in touch for hands-on support.